Signal Watch Watches: Rise of the Planet of the Apes

Anyone who brings up the Planet of the Apes franchise around me is going to regret that slip of the tongue. I love the Apes. I love not just the premise of Cheston landing on a strange planet where Apes evolved and man did not (ahem, SPOILERS) but the twist ending that lets you know this was a Rod Serling Joint. 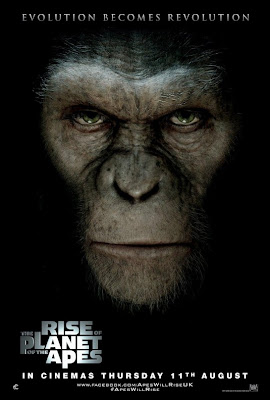 I love that there are four more Apes movies of varying quality with a bizarre and twisted time-travel logic to them. I love Roddy McDowell as Cornelius and Caesar, and Kim Hunter as Zira. I love Cheston as Cheston on a planet full of intelligent Apes. I love the fact that Beneath the Planet of the Apes stars James Franciscus, who is sort of a mini-Cheston AND Cheston.

I'm not old enough to have participated in the Apes phenomenon the first time around, and while I watched the movies as a kid (and liked them), it was in college that I became obsessed. Like all good sci-fi, it was a terrific inversion of our world and our way of looking at our fellow beings.


Rise of the Planet of the Apes straight up loves the first Apes movie, and more or less completely ignores the rest of the series. If you're a continuity hound, it'll drive you nuts knowing that only the first film matters anymore (and I think we can all safely disregard the Tim Burton "re-imagining" of POTA - I know I do). But this movie does tie in with the original very, very nicely, if you listen closely.

Its also packed with easter eggs for the Apes fan. Example: we meet an orangutan named "Maurice". Of course, the fellow who played orangutan-extraordinaire Dr. Zaius was actor Maurice Evans. Lots of little flourishes like that. Scenes from the first movie get riffs and echoes in this movie.

The story plays out as almost a timeline, plowing through a lot at a fairly brisk pace. Likely, some will wish for more lingering scenes, and it might have been nice to have more emotional development between Franco's Will Rodman and Serkis' Caesar, but what's implied in montage, etc... sets the scene well enough. And Will's relationship with his father, suffering from early-on-set Alzheimer's (played very, very well by John Lithgow) does get the necessary treatment and set-up that you can understand how events might roll into motion.

And, hey, the movie employs Signal Watch-favorite actor Brian Cox in a typically Brian Cox-ish role, with Draco Malfoy actor Tom Felton acting as his protege in the movie and likely off-camera.  And Franco is given a love interest who seemingly does nothing but act as a plot point (and I have another theory, which we can discuss offline, I guess).

The movie is surprisingly small for much of the film.  Will deals with his ill father, and on the brink of professional success, he almost loses everything.  Were this another movie, the story would be a feel good tale about how adopting a chimp taught Will about himself and got him to appreciate the world around him, queue Peter Gabriel music, credits...


But this is Planet of the Apes.  As a rule, Apes movies have bummer endings, and this one is no exception.  I won't give it away, but you can guess things won't go all that smoothly once you consider where all of this is headed, and that's part of the point of the Apes movies, I might add.  Its going to end badly for our side because we've got something the apes do not (not until later, anyway):  hubris.  And cruelty.

The Ape CG, while extraordinary, is not always perfect.  Its never exactly-iffy enough that it takes you out of the scene, but there's still that weird place where the light doesn't catch just right or some other element is off against the natural environments of the movie. Still, its a far step forward from the "well, that's clearly not a real ape" of the original film series, and the movements are all very well designed and captured rather than the prescribed rolling gate the actors employed in original films.

The action sequences are pretty great, and if I lived in San Francisco, I'd be flattered that my hometown was chosen to play host to the uprising.  Its a pretty neat sequence.


I checked in with Jamie, who does not like the original Apes movies, and took me to see this one as a sort of gift, and she actually quite liked the movie.  She cited, yes, the action sequences, but also the pacing and the build toward the inevitable conclusion.

I have a theory about why Will was given a romantic interest at all in the movie, but I'll save it for another time.  She doesn't add much to the plot, and seems oddly unphased by Caesar, the way-too-intelligent chimp.

Anyhow, I think its a worthy entry into the POTA world of movies, but its an odd fit as it decimates the continuity of at least 4 of the 5 movies.  But I am curious to see if the studio decides to make another Apes film or leave it alone.

In my book, nobody is going to be able to replace Cheston and crew in that first movie.