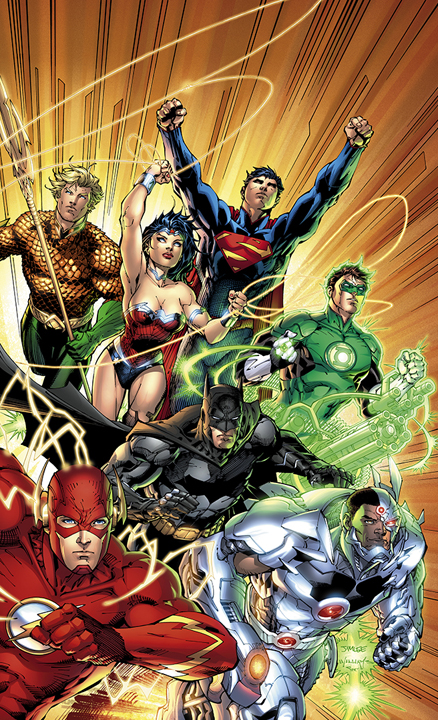 So, Justice League #1.  Its been a long time in coming.

To contextualize, my reading of Flashpoint #5 concluded about two minutes before I picked up Justice League #1.  DC's decision to release the two simultaneously makes perfect sense, and I was more than delighted to have them both to read back to back.  especially as both are written by Geoff Johns and it was great to make the transition with the same writer.

The problem is that as someone who has been a fan of DC Comics since late middle school, how do you read this comic as something that you'd put in somebody's hands who doesn't know much about Batman and Green Lantern except what they'd seen at the cinema?  I can't really make that call.  And the more I think about it, I don't know that I can write a useful review.  Say you're from the Amazon jungle and you meet a fellow Saudi Arabia who has seen a movie or two with jungles...  once you get him off a plane on the Amazon, what does that guy see that you don't?  And what are the million things you see that he hasn't learned to see yet?

As the reader who has read a few different origins for the Justice League, all you can say about this issue is that its definitely the start.  In that, its almost impossible to say much about the issue, because its clearly part of a much bigger story, but as is the classic problem of a storyline that will clearly go for another 5-7 issues, this comic is more or less the first 10-15 minutes of a 90 minute movie.  You can't even say you've made it to the first act twist where the world you've come to understand has a real problem yet.

The action occurs 5 years before "now", so while this is an origin story, its not totally kick-starting the entire DCU.  This is our chance to start at "well, how DID they get together?" before we jump to the seasoned, mature team of the modern era (and I can hope, with the colleague-like vibe that has been missing from JLA for a while).  I have to add, there were enough hints both here and in Flashpoint that "collegial pals" is the tack Johns is taking that I'm inclined to believe that we're going to see a new way for these characters to interact that isn't as guarded as the last 20 years of DC character interaction.

Likely to capitalize on the cinema presence and character awareness, this issue focuses mostly on the meeting of Hal "Green Lantern" Jordan and Batman coming across a mysterious person/ being/ monster which we learn may be alien*.  And chaos ensues.

Its not that Johns doesn't leave a hook wanting to see what happens next issue (even if its the oldest hook in the comic newbie handbook), or that the writing is badly done, its just that I wasn't expecting that we'd just keep right on doing what we were doing before from a structural standpoint.  Its literally to the point where I wonder if DC's master plan isn't to have a larger book-store presence and the floppies are just there to be polite to us old-time readers.

I wish I weren't so surprised by this, but the book is quite funny.  Its not Keith Giffen funny, but Johns lives in the skins enough of his characters that he knows pretty well what these guys would say to each other, and from a third person perspective, if you're a reader who knows a bit about these guys (or even if you don't), I think its a nice bit of warmth the DCU has too often lacked in the past few years outside the occasional Superman story.  I'll talk about some bits I liked in a later post perhaps, but I don't want to spoil them here.

At this time, experienced comic readers will know they're either a fan of Geoff Johns or they are not.  And this comic is definitely Johns in its insistence on ACTION in every panel, even as characters are really talking about something else.  I've gotten very used to this style of writing, and while sometimes I want for Johns to understand that its okay to show Hal just standing there from time-to-time, that he doesn't constantly need business, here Johns' typically frantic pace serves to keep the story going at a pretty good clip, letting readers know that we'll take care of the business at hand, but its not going to dilly-dally or sag as a narrative.

Your mileage will vary, but this is one thing I do think some right-off-the-street new readers might actually quite like.  Superheroes are about ACTION, so why not give it to them?

But with no real conflict in the issue, at least nothing really introduced, explained and resolved, it feels a bit like an odd start for a first issue.  Something about the issue, and the hoopla around "new readers", "all new start" didn't quite sit right with me.  I wasn't expecting DC to return to a 16 page story where the whole team assembles, fights Starro and then exchanges cell numbers with promises to do this again...  But we don't even see half of the League.  There's no villain, or much to deal with.  We don't see Wonder Woman, Flash or Aquaman at all.  For some reason I was under the impression that DC was done "writing for the trade", but pretty clearly, they are not done with that in the slightest.

Eddie Berganza is, ostensibly, the editor, and I often think Berganza's style, especially when dealing with comics royalty like Johns, is just to shut up and get out of the way.

We'll see in a few issues if that was a good idea.  DC will have already burnt through its first real hero-on-hero fight for fans next week, I'm guessing, and maybe that sort of stuff will be enough for newer readers.  Again, I've literally no idea.

I might sound like I'm complaining a bit, but this comic depends on the fact that you're either new to the characters or were familiar with them and want to see what's up now, and so its as much about exposing the new DCU to the reader as anything else.  Yeah, I'll admit, I think this could have been a bit stronger of a debut, but it'll work as big-screen pop-corn movie entertainment.

Part of why it'll work is that I think Lee's pencils with Williams inks and the color-candy coloring of Alex Sinclair is going to really appeal to readers.  Its a bit of sensory overload, but then, that's sort of how I like my Justice League, anyway.

Is this the best possible effort that could have gotten us into the new DCU...?  I'm not sure.  I DO like the comic well enough, but I may not be the right person to ask that these days.  Frankly, I think Johns could have dug a little deeper and pushed a little harder if he's going to be spearheading this sort of thing and championing it in the press and as a corporate strategy.  Its just too important right now, and its got to be the A-Game in every panel.

Its a fun read, but we'll have to check back in a couple of months to see if this book is looking like it will be epic due to the publishing side of the story, or because Johns managed to write THE game changer for DC Comics for 2011-12.

So Wednesday has come and gone.  Opinions?  Thoughts?

*spoiler?  its a Parademon, I'd guess

I forgot it was DCnu day, and was hustling off to teach my LSAT class, so I just grabbed my pull-box with Wormwood (which had a cool ending) and Deadpool MAX.

I'll be sure and chime in when the Red Lantern book starts!

I wish I had something more profound to say. It was Okay. I agree, it was nice to look at. Lee's art and the bright coloring really pop. The story wasn't bad, there just wasn't much to it and it didn't get very far. It took five minutes or less to read. But I was kinda pumped that an A-list villain appears to be first test of the team.

The ending was a nice hook. I just wish more had happened getting there. Looking forward to #2.

Good spoiler free review Ryan. I guess it'll be another 4 weeks before I can chime in. I'm still really wondering how they are going to explain 4 different Robin's in 5 years but that's just me being a pedantic snobb.

Ok, I promised myself I wouldn't get sucked into this again...but there was a local comic shop on my way home from work and I dropped by.

SPOILERS (DON'T READ BELOW IF YOU DON'T WANT TO BE SPOILED)


Who the hell is that girl in the cowl?

Don't read this comment if you want to stay away from spoilers.

@NTT I haven't read the issue yet but speculation on the interwebs points to her being the new Monitor. Apparently, they've gone back into all of the new 52 #1's and inserted her digitally into each book.

I have no idea who she is, but the new Monitor makes sense, even in the context of whatever Morrison was doing with Monitors during Final Crisis.

I hesitate to speculate as DC seems full of ethereal humanoid ladies like Kismet and Rama Kushna. So we'll have to see if she's someone we know or someone new.

It seems a bit spooky that she was added after the fact. I hope that doesn't turn out to be a horrible mistake.

right now that's sort of how I'm feeling about the entire relaunch, but I get your drift. It seems premature to be running a thread that will end up in a cross-over, etc... within the year.

On the other hand, I don't mind if she shows up in Justice League, says "I am the Monitor. Just keeping an eye on you guys. Carry on." and its just to establish the existence of a Monitor in a particularly clever way.

I'm trying very hard to treat everything like its new, and so I'm not rushing the gates trying to out-guess the masterplan.

And "The Horrible Mistake" seems like a good name for a Doom Patrol villain.

I'm pretty sure that's what my Dad calls me behind my back.

Well if it is another new Monitor...color me disappointed. This is the time to be bold and introducing the tired concept of the Monitor, Antimonitor and mohawked universe guy trying to find the origin of the multiverse is just plain boring.

Can we move on a bit from Darkseid, the White Martians and the Multiverse please with the Justice League???

Geoff Johns does a great job of interweaving continuity within his stories but since this is a brand new start, I want something very very new.

Johns doesn't really do "very, very new", and I'll be shocked if you see that anywhere in the DCNu.

What he will do is make old stuff fresh, which is really his specialty, if you read his JSA, Hawkman, GL, etc...

DC can't really afford to do "new" in some ways, but what they can do is re-build the universe they had and make it new reader friendly.

For really new, I think you'll have to look at those ancillary titles like Batwoman.