Did you enjoy the movie of Thor? Captain America? The Fantastic Four movies? The X-Men?


What about Thundarr the Barbarian, the 1980's kid's cartoon?

All originated by Jack "King" Kirby. Today would be Kirby's 94th Birthday.

You can visit the online museum dedicated to Jack Kirby right now.

In the future, Kirby will suffer from the same rumors that plague Shakespeare today. How could one man come up with so many ideas? Produce such a volume of work? How could one man have contributed so much to the story-telling mythology of America and the World? He makes Hans Christian Andersen seem like a slacker.


I won't get too much into how Kirby pushed the envelope.  Instead, I'd invite you to read his run on Jimmy Olsen and just try to keep up.

The thing is, the older Kirby got, the BETTER he got.  A lot of writers can say that, but can a lot of artists?  Kirby kept developing new ways of exploring action and motion, developing his own ways of pushing the limits on perspective and dynamic presentation, right down to the lettering.

His ideas got wilder every year, too, and in that, he's responsible for some of the most outlandish stuff in comic-dom, but he's also the guy who pushed us from the realm of "men in tights" to gods walking among us. 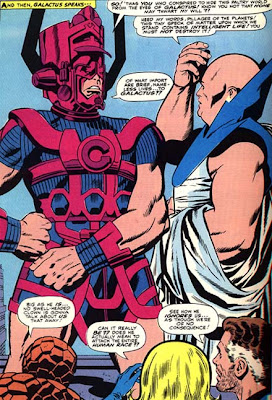 Even on properties he didn't originate (Jimmy Olsen, etc...), Kirby's brief times on those titles were so influential, its hard to escape the gravity well they've created as today's creators return again and again to his characters and concepts.

Heck, DC Comics' answer to Evil Incarnate, Darkseid, first appeared in Superman's Pal Jimmy Olsen #134.  (And I guarantee we're seeing Darkseid right out of the gate in the new DCU.)

While its absolutely a crime that DC and Time-Warner hasn't done right by the Siegel and Shuster and their heirs, the fact that every school kid doesn't know the name Jack Kirby is where the corporate face of Marvel has done a disservice to the public and certainly, financially, the the Kirby Estate (and which Disney, in acquiring Marvel, has done nobody any favors, but that's more or less their SOP, anyway).

But today, let's celebrate everything the man did.

And in Kirby's honor, I post one of my favorite pages of comics EVER.  From New Gods, The Glory Boat.  BEHOLD: 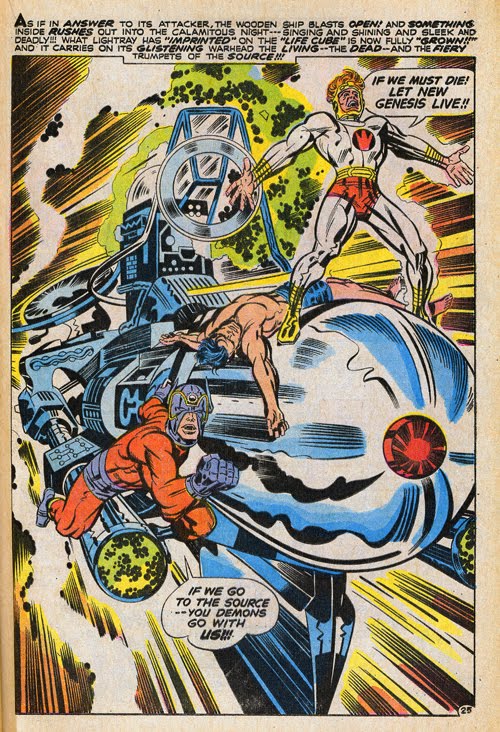