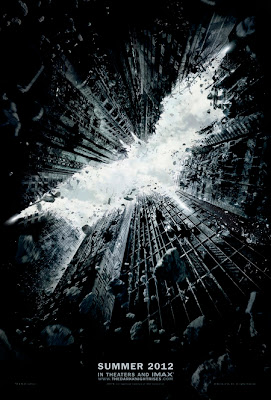 
We shall get it out of the way and say we give a big thumbs up to the casting of Anne Hathaway as Selina Kyle and Marion Cotillard as Miranda.  Thank you, movie.  There were some voices out there wondering about Hathaway's casting, but it felt very much like the last couple decades' version of the character, including elements Loeb, Miller and Brubaker taking shots at relevancy for the thief.

And, of course, whatever was going on with the modulated voice of Bane in the first footage had been corrected without losing the eerie effect.*  Though voices at our post-movie cocktail hour varied, I was a fan of Tom Hardy's Bane, the presence and uber-confidence of a man with a plan.

The film also features Joseph Gordon-Levitt (becoming the action film guy Hollywood thought Shia Lebouf was supposed to be for some reason), a middle-aged Matthew Modine, and the stalwarts of the prior films with Morgan Freeman, Michael Caine, Gary Oldman and Bale as Batman.

The movie has some amazing set pieces, both reminiscent of prior films such as a beautifully choreographed motorcycle chase, but also has some fairly amazing new stuff such as the opening scene where Bane reveals himself and causes some problems for the CIA.

Frankly, I was surprised how far the film ratcheted up the scale of conflict and the expansive timeline of the movie, giving events an opportunity to breathe.  While the film retains the taught flow of the prior installments, the intensity of the film grows and crescendos much differently from The Dark Knight.  This is a movie where the threat reveals itself a bit later, and only eventually gives the audience the full scope which is an interesting mix of by-the-numbers super-villainy and commentary by way of the large cast's responses.

As I'd mentioned in previous Bat-posts, I've been employing as much media blackout as possible leading up to seeing the movie.  I'd heard through the grapevine (a vine of one, being Juan) that on this go-round the political pundits from both ends of the spectrum were upset with Nolan for portrayal of class warfare and a perceived militarization of the Occupy Wall Street crowd.  You can read into the film what you will and bring your own baggage, but there's a difference between reflecting the issues of the day and making overt statements.  The issue of the invisible disenfranchised joining in with Bane was covered not just in 1988's The Cult,  but the movie heavily references A Tale of Two Cities.  So, you know, some of these things aren't exactly problems we dreamed up for the 21st Century.

To that point, the movie carries on in the theme of terror and the response to anxiety, but the potential for great and terrible catastrophe.  If you haven't watched Batman Begins in a while, Ra's al Ghul, true to his comics form, wasn't wrong that Gotham was seemingly hopelessly mired in corruption.  His solution was the elimination of Gotham itself, to cut away what he saw as a cancer.  The sequel, Dark Knight, saw the first rays of hope and chance for a better tomorrow sparked by Batman but now legitimized by Harvey Dent.  But the fall of Dent and cover-up by Batman and Gordon has led to the forces of law and order overreaching as a reaction.  Blackgate is now home to 1000 prisoners held without true due process under the "Dent Act".  The city has seemed peaceful, in comparison, for years, but that peace has come at a cost to both the foundations of justice and to the citizens it serves - not the least of which is a sense of complacency allowing for the usual backroom politicking to begin to occur.

We do see a response in the pent up frustration which Bane releases.  If the film has anything to say on that, it seems to be:  be careful whom you follow and what they promise.  Truthfully, I would have liked to have seen that storyline more fleshed out.  After the initial embracing of Bane, the movie more or less refocuses on the familiar faces and less on how and why Gotham, even for a day, turns on its own.  We get some of the point of view from Selina Kyle, who has a moral core but not one tied to conventional law - and is an interesting mix of self-preservation and contempt built up for those she sees as living so large, while others have so little.  No matter what she's stolen, she's not been able to use her ill-gotten gains to purchase that house on Lake Cuomo and lives in Old Town among the hookers and hustlers.


If the pundits were worried about class warfare as a motif, it's hardly celebrated, but it's interesting to wonder why anyone is worried about the issue when the aftermath of the initial volley bears such bitter fruit.


And, of course, Nolan's demonstration of the rightfully panicky response from outside Gotham feels on target - leaving the people inside no place left to turn - pushing our reluctant secondary character, Blake, along a convincing story arc.


Perhaps Nolan removed any rough edges in order to maintain the universality of the story.  I'll never really know.  But there's not much threatening here other than asking the audience to consider a few questions about those same questions of liberty vs. security but now adding in the confusion of those asking us to turn on one another and what they hope to gain that fulfills an agenda which benefits only a very few.


On the whole, I probably enjoyed this movie's predecessor a bit more, but of the various big budget films I've seen this summer, this one managed to make the others feel like the popcorn summer fare that they were intended to be.  I enjoyed Avengers, even when I found it problematic.  It's joyous superheroing was a great day at the movies.  I liked Spider-Man well enough, but Dark Knight Rises fulfilled the promise of what you could do with a superhero story, allowing ideas to come into catastrophic conflict on an epic scale and create myths for a modern audience.

Again, I'll likely see the movie again in the theater, so we'll see what else we have to say on it then.


*when we went for a few drinks after the movie, and I really enjoyed requesting cocktails with a terrible Bane impression.
Posted by The League at 7/22/2012 01:01:00 PM

After watching Batman Begins and The Dark Knight this weekend I was ready for this film today. I have to echo one of your closing statements as I feel that TDK is the superior film. Not to say that I didn't like this movie because I did a lot.

Honestly, other than the name recognition from Batman I don't even feel like these are super hero movies. Take off the funny costume and Bruce Wayne could be any other action hero and perhaps others would recognize them for the excellent pieces of cinema that they are. Ug the girl who runs the gym I go to won't see the films because they are comic books.

I thought that Anne Hathaway as Selina Kyle was absolutely fantastic. She was smouldering sensuality on screen. I love the fact that her googles flipped up to be cat ears without screaming that she was dressed up like a cat. I thought JGL turn as a Gotham City Policeman was great as well and quite enjoyed his character arc.

What I didn't like is that I saw two of the major plot twists coming from way off. Mind you that is probably more my fault as I have an extreme knowledge of the subject matter the movie was derived from.

That being said I can't wait to see this in theaters again!

Yup. Having read my fair share of Batman, I kind of put a few things together ahead of time, but that's all right.

We're all (rightfully) talking about Hathaway, but I quite liked Cotillard and felt like the casting was entirely on.

Yesss! I couldn't wait to see what you had to say. In fact, had I had your phone number, I would have called you and bugged you about it yesterday. I did call JD, so I could have someone to chat on and on about it with.

I met my dad at the theater yesterday afternoon, and like you, I knew a lot of what would happen (or I should say, guessed) and was really excited to see how they brought a lot of it to fruition.

I know you said you enjoyed TDK more, but I have to say that as trilogies go, I've noticed something: the first really pulls you in, gives you the background, hooks you. The second then has more space to really focus on telling a story sans background. The third is usually when all hell breaks loose, and loose ends are tied. I read a lot of series books, and this seems typical. So I expected this sort of chaotic installment.

I thoroughly enjoyed it, particularly the more philosophical moments. But ultimately, it was pretty good storytelling. As you mentioned, it's also a patient tale, allowing the tension to build over the months everyone is left under the control of Bane.

I will be watching again soon.

bit of clarity. Dark Knight is probably one of my favorite movies of the past 10 years, so this movie was not going to have an easy time of it. If I didn't like DKR quite as much, it's a small matter of degrees and a few things here and there. I'm still incredibly enthusiastic about the movie, and I felt it was a terrific film. That said, I do want to give it another go or two to see what I think when I can take a step back. Honestly, doing this with the other movies just made me appreciate them more. So, we'll see!

Yeah, I forgot to mention Cotillard in my earlier comment. She was pretty great in her role and I agree the casting was spot on and no actor was wasted in their role. Even Matthew Modine in his relatively little amount of screen time was allowed to shine.