I finally got a copy of Star Spangled War Stories #148.  It's a reader copy, not in terrific shape, but I can make a check mark on that particular collection.  And it's not like I don't have a copy of that story in both Showcase Presents and Archives formats.

You guys know I am firmly in corner of Von Hammer, The Enemy Ace. Yes, even as he's shooting down our friends from England and France in plane-to-plane combat, I'm still thrilling to his adventures as he takes his tri-wing Fokker up into The Killer Skies. 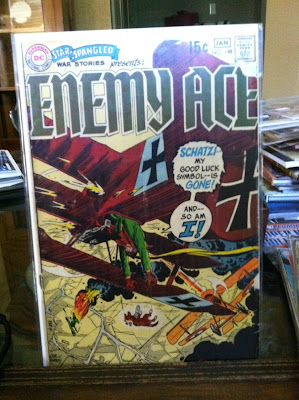 Where Sgt. Rock stories are more or less about managing team morale in Easy Company as they take point in the European theater of WWII, Enemy Ace tales are about the existential dilemma of first finding oneself in a position where you're going up in the air every day, nearly certain to die, and then finding that... no, you're not dying. You're really, really good at killing other people, so now every time you go up, it's just s likely you're going to find yourself taking the life of brave, noble young men.

Suffice it to say, Baron Hans Von Hammer is not the warm and cuddly type. In the comics the only company he keeps include a wolf (that may or may not exist) that keeps him company whenever he goes hunting between missions and his steward, who polishes the silver cups he keeps marking each of his kills.

So you kind of knew that when Enemy Ace decided to get a puppy, it was going to end badly. It's just that kind of comic.

In any other comic, this would be a story where our hero pulls off some amazing aerial maneuvering and plucks the plummeting puppy from the air.  But not in an issue of Star Spangled War Stories.  Nope, when Enemy Ace is your lead, you might as well acknowledge right there on the cover that Schatzi the Puppy is not making it out of this one alive.


It's really a tale about how putting your happiness in anything that can be taken away or die (especially thanks to your own mistake) is a terrible, terrible idea.  Especially if you're Hans Von Hammer.  Let us say he doesn't handle Schatzi's death well.  So, you know, sky death.

For a rundown of the actual story, you can read here. Or here. But I really, really recommend you check out Sleestak's post in which he ponders a DC Multiverse made better by Schatzi!

It's not hard to see that Kanigher and Kubert were pushing the medium and audience with the arrival of Enemy Ace. He appeared during an era when the Comics Code was beginning to slacken a bit (1965), and a new level of craft was just beginning to appear. It's still sort of shocking to see the tag "The Hammer of Hell!" on the cover of comics featuring Enemy Ace.  One can read the comic as anti-war, but I think, more than that, you can read it as the reflection of artist from a generation that had been affected by two wars (WWII and Korea) and who understood that what happens on the battlefield or in the skies has little to do with the politics of what got the combatants in place.

But I think you can also read this as a cautionary tale about NOT TAKING A WOUNDED PUPPY INTO AERIAL COMBAT.  Geez, Hans.  Think.