A couple of quick Superman Reviews: Superman Family #3 and Superman #11 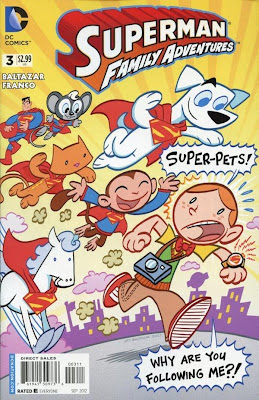 The fact that this book isn't moving 80,000 copies per month is a crime.  Good-natured, action-packed, zany, bizarre and purely in love with the Superman mythos, this book is a perfect comic to hand a kid as well as your hipster pal looking for a good laugh.  If you're into a balanced diet in your comics, this is sort of the lovely pudding you should save to savor at the end of the buy pile.  Or something.

It's pure, pop Silver Age versions of DC with a distinctly wry and modern sensibility, and, unlike most other DC books, remembers that Jimmy and Lois are meant to bear witness to the action with a sort of "holy cow!" view of what it's like to watch Beppo the Super Monkey show up to fight an invading fleet of aliens.

This issue splits into three scenes, all around the same day and event, in a manner we saw a lot in Tiny Titans.  For parents sharing with the kiddo's, this might be a good way to break up the reading experience.  But for us slightly older readers it's just a fun kaleidoscope view of Metropolis and a day in the life of Superman and his family and friends.  How can I go wrong with a book with stories with Jimmy, Krypto and Lois and Clark?  Also:  Super Robots.  A new supporting cast for Jimmy.  Fuzzy the Super Mouse.  etc... etc...


Superman #11
I blame Jurgens and DC Editorial in equal parts. 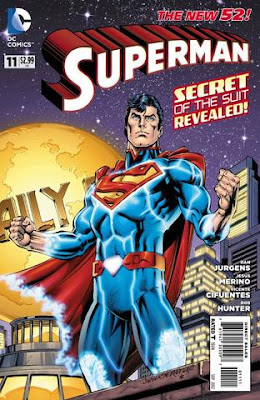 The cover blurb for issue 11 of the New-52 Superman reads "secret of the suit revealed!".  Well, spoiler alert - nope.  I mean, they show the suit, and the neckline changes three times in three panels (none of which feature the dippy front 'v' feature), so maybe THAT'S the secret.  But aside from that?  I have no idea what they're talking about.

I do know Jurgens is abandoning Superman already and we have Scott Lobdell to look forward to in pretty short order, so my guess is that if Jurgens had a plan, he scrapped it to do this extremely dated "Superman visits the Russkies" story that ends with Big Blue in a tussle with an interdimensional alien that's entirely cribbed from 25 years of Predator movies.

It's entirely clear that something misfired at DC Comics with this title, and editorial is still flailing in the wind trying to figure out what the hell it's all about, but this comic is a mess from jump.  And while I appreciate the fact that DC has been working so hard to get people interested in Superman and sales are up - this is absolutely the way to lose any goodwill and confirm the worst suspicions everyone had about the character to begin with.

No big secret, but I'm not a fan of much of the 90's-era Superman.  Jurgens was a very big part of what I consider the clunky, overly expository era of Superman where he sort of developed a reputation as a bit thick across comicdom.  And looking at this issue as Superman spends page after page stating the obvious to himself, and otherwise merely feels like a cardboard cutout of a generically heroic character, it's all coming back to me in a bad way.

Unfortunately, Lobdell isn't much of an improvement.

There are several pages that look rushed, and don't look like Jurgens... including that page where the collar shifts three times.  I have to think - those were replacement pages, and we'll never know why.

What a blown opportunity.