On August 1, 1966 Charles Whitman killed both his mother and his wife while they slept.  He went and purchased firearms from local shops, then drove to UT Austin's central tower.

Then, as today, the tower was an administrative building and, at the time, was also the library for UT Austin. It still looms well above all other features not just on campus, but for much of the surrounding territory.   From the top of the tower, one has a panoramic view in all directions, far out to the hills of West Austin, into downtown to the South if you look beyond the South Mall and the older buildings on campus that surround the grassy strip, usually strewn with students studying and socializing.  To the East lies the stadium and a great swath of campus, and to the North, the science buildings, and past that, the Hyde Park neighborhood.

I went up the first time in 2000 shortly after the Tower's observation deck re-opened for the first time since a rash of suicides in the 1970's.  No, Whitman's atrocity didn't convince the University that it needed to be closed.

On that morning, Whitman took a footlocker full of weapons with him to the top of the tower, and knocked an administrative assistant unconscious with his rifle (she would die later at Seton Hospital).  He would show a final and baffling act of mercy as he let a couple who had not seen the secretary's unconscious form bypass him, and then he barricaded the door.  Moments later he would kill and wound several tourists who came to the door seeking to go out to the Tower's observation deck. 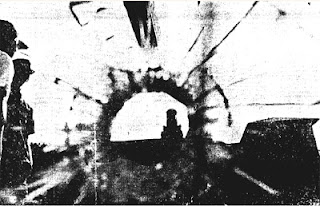 Whitman took advantage of the unimpeded vantage provided by the 27 story tower and began firing down upon students and faculty walking between buildings.  For about 100 minutes Whitman held Austin hostage between Guadalupe and the East Mall, from the North Mall to far past the South Mall, where visibility goes down to 21st Street and further down University Avenue.


It's worth noting that the city mobilized fairly quickly, with citizens and emergency personnel taking part in rescue and protection - including driving in armored trucks for protection and ambulances owned by funeral parlors.  APD officers Houston McCoy, Ramiro Martinez and Jerry Day made their way to the base of the main building and up to the top of the Tower with civilian Alan Crum where they managed to overtake and kill Whitman.

At the time, Austin was a small city with a large university, and so when the wounded came in, the hospitals were overrun and barely able to assist the victims.  All in all, Whitman killed fifteen people and an unborn child. He injured many, many others and the events of the day still echo across the UT Austin campus, the place where I report to work every morning.

The photo below is from the base of the flagpoles that stand south of the tower, the only viable shelter for fifty yards.  The woman sits south of the pole, facing north.  I cannot begin to guess how hot she must have been in the Texas August sun, with no reason to think she'd survive into the next minute. 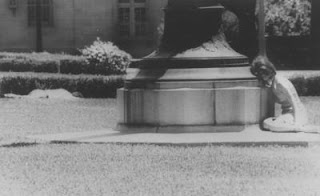 Oddly, I learned of the shootings one summer in middle school when I was already living in Austin but on a  family trip to Michigan.  I suppose it was likely a program commemorating the 20th Anniversary in 1986.  I was 11 and just coming to the age where adults quit hiding facts from their children. It was a hell of a way to find out some facts about the old hometown, but neither of my parents is from Texas - and at what age do you ask a child to make sense of something like that?  And at what age do you trust them to understand that sometimes terrible things happen?

It would be another several years before a man would drive his truck through the front of a Luby's Cafeteria just north of Austin and begin firing at diners, killing 23.

I pass the flagpole in the picture above a few times per month.  It's odd to see the picture and know how little has changed about that exact spot.  But I do look at the tower every day, especially around 6:15 as I exit the library.  Only occasionally do I look up and associate the peak of the building with Whitman, and then, only if I'm walking directly towards the Tower across the South Plaza.

It's not that we've moved on or forgotten the events.  Rather, it's that when you live here, or go to school here or work here year after year, The Tower isn't about tragedy.  It's the color and light patterns every Austinite comes to watch to see how the team is playing, be it Volleyball, Baseball, Basketball or, of course (and of supreme importance), Football.  It comes to mean the carillon that's housed at the top, and where students play Christmas tunes during exams and from where Burt Bacharach's "Raindrops Keep Falling on My Head" can be heard during spring showers.  It's the building I was passing in 1993 as a freshman in Doc Martens and an ugly shirt who looked up at the words engraved on the front of the building and stopped cold in his tracks, suddenly aware of the core mission and purpose of this monument carved of stone and steel and crammed with books and students and faculty.  "Ye shall know the Truth and the Truth shall make you free."  And I fell in love with the idea, and I never really left it behind by making a career out of supporting that ideal.

But every once in a while I'll be walking across campus with someone new to the university, and they'll look up and they'll have a few questions.  I'll tell them someone out there knows how to find the bullet holes in the cement of the plaza, and I'm not sure if there aren't still bullet holes up near the clock face from when Austinites came pouring in from West Campus with their own hunting rifles and shot back.  But just as quickly, I'll tell them "yes, we continue to take it very seriously, but it's not something we dwell on".

Maybe incoming freshmen play it cool and make jokes about it, but that fades quickly.  Sooner or later you come to understand that the people who died were exactly like you, doing exactly what you do every day, simply walking to class or between buildings.  Headed home, headed out for lunch.

In 1999 UT dedicated a Memorial Garden to the victims, and last year I recall walking across campus when a bell was rung for each victim.

Of course, on September 28th, 2010 Colton Tooley brought a weapon to campus, fired rounds beginning near the Littlefield Fountain at the opposite end of the South Mall from the Tower, then preceded downhill, headed East, and entered the Perry-Castaneda Library where I work (but, oddly, was out of the office that morning).  Somehow, despite every seeming intention to do otherwise, Tooley chose not to take a single life except for his own.  In the wake of Virginia Tech and in the shadow of the Tower, we know what could have happened.

We pick up.  We move on.  We don't forget, and we try to learn from hard-earned experience.  The first SWAT teams were formed in the wake of the Tower Massacre.  UT changed several policies and alert procedures following the 2010 active shooter incident.

But this is how I tend to think of The Tower. 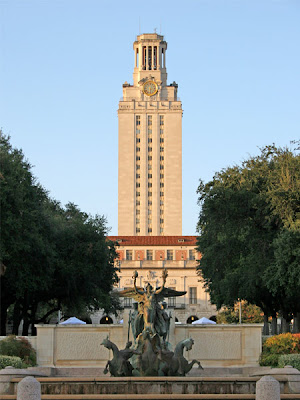 A fantastic piece of architecture rising above the city skyline, made from stone and metal and something that will be there long after you and I are ancient history.  A piece of continuity for anyone who ever set foot on that campus as student, faculty or worker.

Of course, inside there's the beautiful Natural Sciences library, the fantastic suite of offices for the administration (carefully guarded lest us ruffians just walk in), the graduate school, the terribly mean registrar who always wanted more of my money in the mid-90's, and then the Tower itself, a rat's nest of tiny offices spiralling upward with steel girders in odd places and a building that was only ever fit for housing books in the old library days with the dumb-waiter to bring them back down.

But as much as I like to see the Tower with the western light falling on it in early evening, we all love it most when it's lit from top to bottom is the closest to Burnt Orange they could muster, and we can know we're seeing that #1 in the windows for a reason. 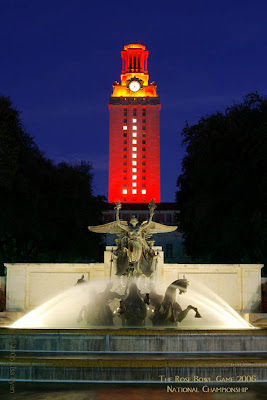