Let me get this out of the way:  I've always enjoyed the artwork of Gary Frank that's come through my buy pile, and here I felt like he somehow trumped his previous efforts and delivered the Gary Frankiest artwork that ever Gary Franked.  That's a compliment, y'all.  Beautiful illustrative linework, an ability to capture expressions that's somewhere approaching Maguire, a great sense of panel layout and page management...  In my book, this is just gorgeous work, including the inking and colorist work.  This level of quality is the sort of thing that can give a casual buyer at the book store a chance to seriously consider buying a comic even if that's not their usual thing. 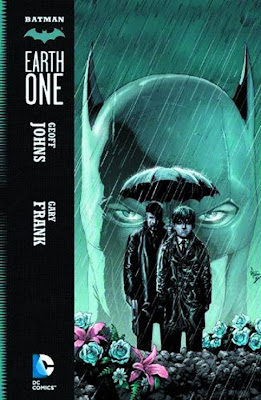 I appreciate that DC seems to have tried very hard to up their game in the art department.  When you're putting a package together like this for a book store audience, and you need yet another take on the Batman origin story to sell inside comic shops, you might as well go crazy putting out terrific looking superhero art.

Unfortunately, the book isn't just about the art, and at some point you have to also tell a story.


I'm of the generation that came of age as Batman: Year One redefined Batman and changed how people thought about Bruce Wayne, Commissioner Gordon, and Gotham itself.  Miller and Mazzucchelli's Gotham was given the character of late 70's New York, and the visual appeal and lived in, believable look of the city made it a character in the book that seemed far more tangible than the nightmare vision of gargoyles and spires we normally get.

Johns sets out to keep the story oddly smaller and more compact.  The globe-trotting Batman of both the post-Crisis era and the Nolan films gets shelved for a student and teacher approach between a far angrier Bruce than Miller's (and seemingly not over the self-centered rage that Nolan's Batman gets over in the wake of Joe Chill's assassination), and a completely re-imagined Alfred as some sort of former super solider/ security specialist.

Unfortunately, the ideas don't click very well, and the book feels like it needed to be half-again as long to breathe.  Much like Johns' Secret Origin for Superman, it feels like a checklist of items pushed through, none with any real significance or motivation.  We don't really learn much about Bruce Wayne and the very basic question of "why bats?".  Nor what he thinks he's going to do in the costume.  Or even what's really going on in the first scene of the comic.  It just happens, but doesn't feel particularly tied to anything.

Alfred is also a mystery.  We get no real insight into him other than that he knew Thomas Wayne, but he doesn't even know the boy he's asked to take in.  In a sort of "storybook" way, I guess it makes sense that a man of dubious background is just given a 10 year old boy and a mansion and, presumably, a fortune.  I don't know how fictional Gotham works.  But this is what I think Grant Morrison was discussing in his book SuperGods when he suggested that maybe applying grown-up logic to Batman just ruins the character.

A lot of people are probably going to like this book, citing the "logical" changes to Alfred, Johns' attempt to make Batman more "believable" or "realistic".  I found this book too short for what it was trying to do, and the attempts at "realism" to just point out exactly how much willing suspension of disbelief you need to really get the modern version of Batman to work.  Miller eschews detail and gets away with it because he gives Bruce a lengthy absence from the city during which anything could have happened.  Johns suggests that Alfred has all the knowledge Bruce would ever need to become Batman, and encourages him wholeheatedly (except when he doesn't), fundamentally changing the relationship on such a level that it feels broken.

Johns has never been known for subtlety or nuance.  He doesn't work in themes, motifs or symbolism.  And, you know, there's an audience out there for that.  If his Batman decides on bats because he opened a door and bats flew out and that was super surprising and weird, then... great.  But I'll take my Miller pages, thanks.

I won't go bullet by bullet with what I thought doesn't really work.  That's tiresome for both of us.  But suffice it to say, I'm likely done with the Earth One world.  It feels unnecessary, especially in the post New 52 world.  The package is lovely, but the cost, at $23, is entirely too high when you can see Dark Knight Rises for around $13.

Whatever magic Johns had to weave together continuity old and new doesn't necessarily seem to translate to a cohesive origin story, even when you can practically see the outline of beats and twists in front of him.  In short, I guess I need a better origin story for Batman than the one Johns puts out here, which feels like a sea of ellipses.  Had he created connective tissue in the book as strong as some of the individual scenes, and had he better developed the motivations of both Alfred and Bruce, I think I could have dealt better with the book.  But as it is, I recommend a quick look at the book store, then put it back on the shelf.
Posted by The League at 8/03/2012 12:06:00 AM

I flipped through this book but did not buy it. I like Gary Frank as an artist but I really, really don't need another Batman origin story. Although one thing that I did find jarring is that Batman's costume changes nearly halfway into the book without any explanation. It goes from an old 1940's look to something inspired by the new 52. I wonder if Frank was told to change up the costume in later pages to match the new 52 version but they didn't want him to redraw the earlier pages as the book was pretty late.

They probably DID have a page or two talking about that but it got dropped in editing or for page count. It may be that a lot what didn't work for me on pacing got cut, and that drove some of my comments, but... who knows?

I'll flip through again and see if I can figure it out.

Took a look at the book again this morning. The costume change isn't discussed. I dunno. Maybe I missed something. This is a really disappointing comic and I'm sad I spent money on it.