With the arrival of the Universal Horror Blu-Ray set, I wanted to get Dracula (1931) in before Halloween.

I first saw Dracula back in high school when it was going through a bit of a renaissance, probably because of those @#$%ing Anne Rice books that I kind of blame for leading to Twilight.

As a kid my concept of Dracula the character was fairly benign and drawn from things like The Groovy Ghoulies and the 70's-monster-plosion.*  But Dracula never seemed to be available on VHS, and I sure as hell wasn't going to read a whole book, but thanks to the monster-magazines and books I always seemed to have growing up, I already knew the story, including the character names and basic plot elements. 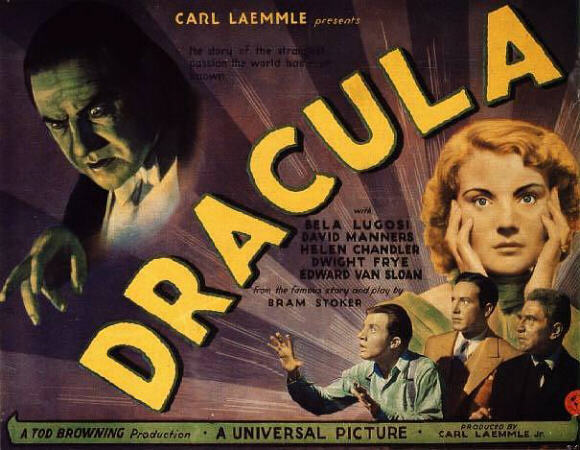 I was surprised how spooky I did find the film the first time I saw it.  I've always been of the Ed Wood school of willing-suspension-of-disbelief, even in movies which have long traded on literalism for the most part.  If I see a giant fake bat on a string, I guess I just buy that that's supposed to not just be a bat, but Dracula travelling incognito.  If there are armadillos in Castle Dracula, then, by gum, Transylvania must be overrun with cousins of my fellow Texans.  I dunno.  As long as I'm enjoying the film, I've always been willing to forgive a lot.**


I really, really like Bela Lugosi, which, for some reason, those hip to the film world of the 1930 or so are not supposed to do.  We're to want Chaney or someone else in the role, but Bela is my Dracula, and even Frank Langella and Christopher Lee don't manage the sheer alien-ness of Lugosi's Count, longing for death even as the evil that fills him drives him on to give everyone around him a really, really bad time.

The power of Dracula is not just in that he's come for our women (and that sly foreigner in the tux seems like a threat), or that he's also here to kill people by drinking their blood.  It's that Dracula crushes the human will with a stare or hand gesture, and Bela has these things down to a science, be it trying to destory Van Helsing or pushing away his own brides (still, to me, the creepiest visual).

Dwight Frye, who plays Fritz in Frankenstein and Karl in Bride is amazingly bizarre as poor, miserable Renfield, Dracula's plaything and servant.  And I think Helen Chandler's performance as Mina is probably better than she gets credit for, especially in the last reel as she starts to turn.

The BluRay transfer is what you'd hope.  I didn't watch the feature yet on the restoration, but in those wide shots in Castle Dracula and the long shots of Carfax Abbey, the gloom gives way to detailed backgrounds with the sharp relief in the shadows that I'd never before seen.  The film is cleaned and the popping and filaments we may be used to even in nice DVD transfers like the release from about ten years ago doesn't look as uniformly clean and punchy, letting you know what the first films struck from the negative might have looked like before time had its way.

The structure of the film is odd, owing to the silent era, coming on the heels of The Jazz Singer by four years, and with no score behind the film - its eerily silent, right up to and including the death of Dracula.  It seems to suggest it's Dracula's world of silence and darkness, and we're just living in it.  The camera work is occasionally brilliant, working beautifully with set design, but stilted with some of Browning's static direction to his cast.

I won't bother to jump into comparisons between this film and the book, or this film and the popular 1992 version (they're all their own animal) except to say that the book is much more present in the film than I'd remembered and is somehow less melodramatic and top-heavy than Coppola's oddity.

For modern audiences, the film's pacing is slow, deliberate and even at just 80 minutes, might tax viewers looking for a thrill ride.  It's movie about the discovery of a horror that, in the context of the film, nobody yet knows exists - not the world of vampires and their corny rules that Buffy knowingly winks at as she begins popping off bloodsuckers with high flying spin kicks.

In a way, the film is most fascinating as an artifact.  Dracula, thanks to Lugosi, so infiltrated the pop culture that he became codified into culture itself.  Even those who don't know the name Lugosi see his picture and know him, and know that Dracula is to look like him to be proper (which probably surprises anyone who first cracks the novel to learn he's supposed to look like your malnourished grandpappy).  Like Frankenstein, Superman or any of a dozen other cultural icons, the fact that a novel or story existed first, before the satires and knock-offs became known as the reality - there was Bela in his cape, creating a haunting, haunted character that rattled and thrilled audiences, and gave women (apparently) enough of a sex-up thrill that I keep stumbling across The Vampire Diaries on my cable dial as a 15th generation knock-off gets sold to suburban teenaged girls who won't get whatever Lugosi cracks do get made.

It's a beautiful artifact of its time.  Perhaps not as epic as it could have been, but certainly more than a novelty or curiosity.


*I find the 70's interest in monsters a bit baffling, except that the kids of the 1950's were coming into creative positions.  Sort of like how we're all dealing with Ninja Turtles and NES nostalgia as the kids of the late 80's and 90's are buying back their childhoods, and Star Wars surged again as I hit my mid-twenties.
**until what I'm enjoying are the things I cannot believe they did, rather than what the film they were trying to make
Posted by The League at 10/26/2012 10:55:00 PM