The Honest Truth About Why No Post and Mondo Gallery

I've already pre-loaded a number of October posts, and you'll get those for several days.

Sadly, now is one of those times that I'm terribly busy at work, and things like AWS going down don't make my job any easier.  Especially when I'm flying to Denver in a week and a half to talk about why my organization uses AWS.

So, the bottom line is that I've been super busy.  I worked Sunday night and I worked tonight when I got home.  I'll be taking tomorrow night off, but then I'll be working again on Thursday, and then on Saturday and Sunday.  Because: deadlines.

In the meantime, I'll try to provide some content, but I'm pretty busy, y'all, so bear with me for a couple of weeks. 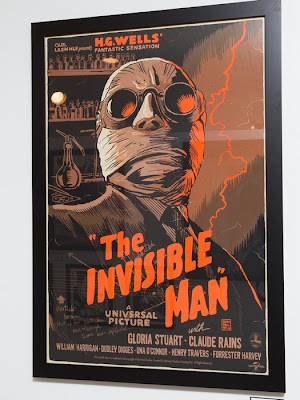 I did make a trip during my lunch hour today to the Mondo Gallery in Austin.  They're doing a show on the theme of Universal Horror Movies, focusing on Dracula, Frankenstein, Bride of Frankenstein, The Wolfman, The Invisible Man, Creature from The Black Lagoon and Phantom of the Opera.  As you may know, it is Universal Studio's 100th Anniversary, and, historically, their most enduring franchise includes those creature features, even if they haven't known what to do with them for quite a while.*


The show is terrific, with lots of original art and they've got some Mondo Poster Prints for sale.  I picked up a few, including two of The Bride, Dracula and Frankenstein.  I'm negotiating with Jamie as I am not sure either Bride poster can even go up in public view, but Frankenstein is most definitely getting some key real estate.

I believe the posters will go onsale online, so jump on twitter and look up Mondotees. 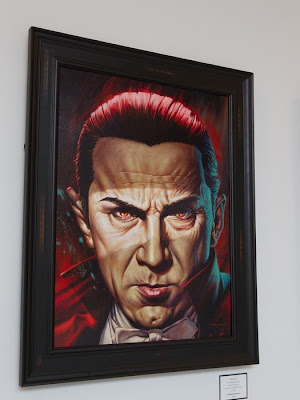 It did make me think about the interesting world of pop art, and the cost of paying $5000 for a Drew Struzan original drawing of, say, The Mummy.  Or $4500 for a picture of Dracula in water color.  You can't see the posters at the Gallery site right now, but you can see the original art.  And if anyone wants to blow more than $5000 on me, this would be nice.

It's an interesting market - aimed at consumers of pop culture with a hell of a lot of disposable income.  Not folks who are going to pick up local artists' works for their homes or acquire art for the usual reasons.  They're artifacts of the movies, only not really.  Fine art living in a twilight realm of collectability as neither respected artists on the official artist scene, and not actual props or ephemera from a movie's production.

It reminds me of looking at Alex Ross original art for sale.  While its true you're really looking at the art that Ross produces for comics covers and its part of the process - outside of comics - what does a painting of The Shadow or Superman look like?  What's it worth to a reseller at a New York Gallery?

That said, Ross has found his niche in the "legitimate" art world, enough so that he's getting people into museums - at least parents taking kids to see a neat-o comics art exhibit.  But there's something to whatever will get people in the doors...

*Van Helsing was not the answer