I don't really keep a list around of "what is my favorite movie?" (I mean, go ahead and check out my recommendations at the tab above, but...) but the first two James Whale directed, Karloff-starring Frankenstein films are in the mix somewhere.

It's one of those things that is difficult to explain.  And it's funny, because I am absolutely not alone in my admiration of these two films - but the folks who like these movies also seem to have a hard time putting feelings into words.  Even the eloquent Neil Gaiman seems at a bit of loss, but I think he does as good of a job explaining the appeal of The Bride of Frankenstein (1935) as you're likely to see. 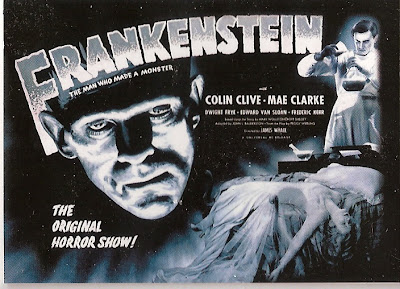 Yes, it's correct to point out the stunning sets and cinematography as Whale imparts the lessons got from German Expressionism upon an American movie screen, the haunting lack of music in Frankenstein (1931),   a film just a few years after the advent of the talkie, or the score by Franz Waxman that drifts like a dream through The Bride.  But I tend to think its director James Whale who ties together the films, who manages to capture lightning in a bottle in the first movie and then seems to immerse the audience in Frankenstein's delirium in the second - using Pretorious to push the bounds with bizarre set pieces and a dark mirror of Henry Frankenstein's desire for knowledge unshackled by conscience or convention.

There are a thousand small details that works so well - and what really worked particularly well on the big screen was Maria's father's walk through the wedding festival, carrying the limp form of his daughter.  Even in our theater, you didn't hear a sound of anyone eating candy or popcorn, nobody making a peep as the long tracking shot followed him to the Burgomeister's door.  A beautifully thought out shot.

What's terrific is how the performances blend together - from Colin Clive's unhinged performance as Henry Frankenstein realizing a mad dream, to Karloff's silent, bewildered behemoth, to Dwight Frye's creepy Fritz - setting the stage for weirdo lab assistants as a staple of science fiction and horror for the next 80 years (and Frye's reappearance as Karl in the second film is more than welcome.  And you'll pardon me if I hold talk of Elsa Lanchester for another day. 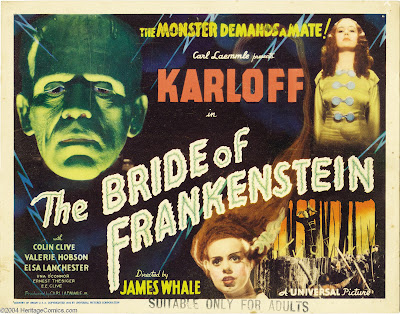 I still find it odd, and I have since I was a child, that The Monster is thought of as a fiend in the popular imagination.  Shelley's book and both of the first films may have The Monster perform acts we'd consider terrible - but it never feels like less than a terrible misunderstanding in either movie, and the books and movies are hardly subtle in pointing out who is responsible for the sins which occur.  And the rampaging villagers with their torches, while righteously furious, manage to show the failure of the wisdom of crowds.

There's no doubt in my mind that it's the human pathos of The Monster that brings me back to the story as much as any other factor - of the terror for the monster to be of eternal loneliness and that his hands seem to do nothing but make it worse the harder he tries.  The first person to reach out to him genuinely he kills through error, and by The Bride he leaves an old blind man with his house burning and a lot of questions.  And each wound inflicted on the world simply separates him further and further from humanity.

I will never say a cross word against the 1931 original, but The Bride of Frankenstein strikes me (and most people who've seen both) with far more resonance - but perhaps like The Dark Knight or even The Godfather II, the resonance relies upon the foundations set up in the exposition of the first, fantastic - but somehow lesser - film.  There's thematic mirroring - even the scenes with Shelley and Byron repeat as Frankenstein and Pretorious bring the swaying Bride to life.  The movie blasphemes but looks to God for salvation, and is rich with Christian religious imagery.  The characters have depth lacking in the predecessor, the movie has a dark and wicked sense of humor which was a restrained undercurrent in the first film (The Baron always gets laughs from me in that first film, but Minnie and Pretorious are hilarious throughout this film).  And as frantic and nerve-jangling as the scenes of bringing The Monster to life are - the lab scenes in The Bride are extraordinary.  Not to mention the stunning reveal.

While the ending to The Bride is abrupt (and why would you even have a lever that DID THAT?), you can't help but feel there was no epilogue needed.  This poor bastard has simply had enough in his short existence - and his last gift is freeing Henry Frankenstein and wishing him well that he not be as friendless and alone as the three miserable beings left in the tower.