League of Melbotis: 10 Years of Blogging

March 30th, 2013 marks the 10th anniversary of my blogging habit.  Ten years, something around 5000 posts.  That's just the blogs of which I've been chief proprietor.  I also wrote briefly with other folks at Nanostalgia and at Film Fodder (a paying gig!  I made, literally, about $1.25).

So, I've written and posted a lot.  Big whoop.  Sometimes I wonder if I've a small case of hypergraphia that's gone undiagnosed, but we won't dwell on that here today.

Pushing through the haze and trying to remember why and how...  you start making up stories in your own head to make it sound better.  But it's mostly right there in print.  At the age of 27, looking down the barrel of 28, I kicked off the first blog, League of Melbotis.

In 2003, blogging was in its infancy, and it was not called "blogging" if you wrote for Slate or Salon at the time.  It was looked upon with a bit of  "who does s/he think s/he is?" skepticism left over from the days when printing seemed like a privilege.  But blogging was free, mostly, and you didn't need anyone's permission.  We can debate whether that was good or bad some other time, but in 2003, personal blogs were beginning to proliferate.  I found the idea unweildy.  My generation had been raised to be stars only if selected, not by choosing to stand on a street corner like a maniac and just start jabbering to see who would listen.  But rational, reasonable people I knew were posting here and there.

What you also have to understand is that, before blogging, I used to email A LOT.  I would send long, rambling emails to people even before we moved to Arizona, and once in Arizona and without an outlet for talking to anyone after I left the office, I was constantly back and forth with people online.

I was encouraged by our own JimD to try my hand at taking my email missives and rather than trying to entertain Jim by overloading his inbox, he suggested I take it to a public forum. It took a long time from the first suggestion to when I finally did start (and, oh, what the world lost by the delays before I was willing to claim a URL).

Back then, my parents were still struggling with email and - in their own home - were still on dial-up, so I couldn't really picture a world in which anyone but me and a few friends might know about the site.  So, when we first started, I wrote for the audience that exists when the parents are out of the room.  The tone was snarky.  I actually cared about politicians and politics at the time (oh, the folly of youth), and I thought of it a lot like storytelling and journaling.  My audience was me and Jim.  I didn't worry too much about anyone else.  I worked blue.  There was a tartness and a sharp edge to a lot of those first years.  But I was also not happy on many levels.

It's probably important to understand that in March of 2003, I had lived in Arizona for almost a year and made the decision that I sincerely did not like the direction my life had taken.  We were not having a good time of it out there, and it was an extremely trying period.

In 2002, we'd left Austin to try something new with our lives and landed in a suburb south of Phoenix.  In 2003, Chandler, Arizona just sucked really, really badly.

I'd gone from living in an entertainment destination town where everything was 20 minutes away to living at literally the furthest edge of Phoenix, and just getting into town was a major excursion.  Where we lived, when we met people and stated that we didn't have any kids and weren't trying,  it was clear no one had anything to say to us, or did not want to talk to us.  The entertainment we did have access to was of a variety to which I was not at all attuned, fit for folks raising families who had packed their 20's away in a footlocker.  I had never been an edgy, punk-rock, screw-the-system kind of guy, but I also wasn't ready for the 9:00 bed-time bedroom community I'd hazarded into.

Anyway, it made for good blog fodder, even if it was to laugh to keep from crying.

Through it all, I had Jamie, Jeff the Cat and our beloved Melbotis (God rest his soul).  Melbotis was my 100+ lb Golden Retriever of curious intellect and ability.  I had full conversations with that dog on a routine basis, and, as Jamie was mentioning to me recently, it was far more of a buddy system than what we've gotten into now where we treat the pets as surrogate kids.  But, that was Mel.  He had his own opinions, and you knew what they were.

Mel, Jamie and Jeff found their way onto the page immediately, and we had a cast of characters.

As a side note:  I've only used Blogger as a service from early days.  I was told I was a chump for doing so, but, man, it's easy to use.  And it's so much better than it was in 2003.  The purchase by Google has been nothing but really nice, truth to be told.

Eventually, though, Google meant that bored relatives Googled my name and...  before long, the blog was discovered.  My folks called and asked me about it.  Like anything else, once the audience isn't you and your smelly friends, it changes the nature of what you're doing.  It probably kept me from going particularly blue or dark, and maybe that's been a good thing over the years.

I started when I was a decade younger, and in those early posts I can see a lot of the energy that I see today on comics blogs by folks in their twenties, and it's a bright-eyed belief that I miss.  Comics blogging was young.  From time to time, I'd get cited by blogs and bloggers that are still out there.  I tried focuing just on comics, as that seemed to be how things were headed, but I couldn't do it.  I've always been ADD.  My insistence on chasing shiny objects, be it comics, football scores, movie plots or pin-ups, has no doubt crippled my ability to maintain the readership that would make this endeavor worth doing.

Ten years of this, and it never really stayed the same for too long.  Different topics, different formats.  Heck, aside from a bare handful of you, different readers.  It's been years since people sort of huddled in little blogging tribes, commenting on each other's posts.  Social media (a term that didn't exist when I started blogging) has changed everything.

Looking over old posts, I used to tell lots of tales of my confusion at trying to be an adult, and it's always interesting to go back and read one.  I just want to hug that guy and tell him it's all going to be okay.

During his recent visit, Nathan asked me how social media had changed blogging and I think I said it really hadn't but that's not true at all.  Yes, I still get comments.  And, what I told him about managing comments on the blog, Facebook and Twitter is all true.  But the sense of participation has changed.  I quit running interactive contests or events for the blog because no one could be bothered to write anything longer than a tweet, and I don't blame them.  The emails I've received during this anniversary outing has been truly moving.  I appreciate every one of those letters all the more because I know exactly how hard it is to sit down and say something honest not about yourself, but about someone else.  Y'all are truly the best.

I mean, this blog hasn't been organized.  It hasn't had those themes, and while I appreciate the comments - I have no idea why someone would keep showing up.

The blog was therapy and outreach.  I don't think that's changed.  After we returned to Austin, the world had opened a bit, and in the directions I reached with the blog, there were new people talking.  Despite the supposed community around comics, it always felt like a lonely thing I did by myself.  Even when I bought comics at the shop, I knew that if I wasn't buying what the manager liked, there was no conversation to be had.  It was an odd thing to love something and speaking about it fell on deaf ears.*  Jamie, of course, is infinitely patient with my occasional and tangential outbursts, but she has to listen to me.  She lives here.  You guys...  You guys just keep showing up.  It's bewildering.

In April I turn 38.  I've got the better part of a quarter of my life accounted for.  I put it down in writing.  And I tell you this:

Holding a person responsible for what they said on a topic 5-10 years ago is ridiculous.  I say some pretty crazy things that the League of 2013 wants to slap the bejeezus out of The League of 2003 or 2004 for saying, be it about comics, movies, politics, the news, what have you...  So the next time you feel like that cable news channel really zinged that guy because in 2007 he said chocolate donuts were the bomb and in 2013 he's saying they're fattening and should be avoided: apparently, people change their minds on stuff.  You get in front of a camera or behind a keyboard, and the only difference is that you're on record.**

I've changed in ways big and small.  Some of you have stated that some of those changes made you sad in some way, and I was never sure how to react to that.  We're all, all of us, changing.  I'll leave it to Philosoraptor to ponder what it means that change is the only constant.

My current plan is to go on a multi-month hiatus in July, after the release of Man of Steel.  I figure I can stick it out til then, and it would be strange to disappear when Superman seems primed to re-enter the zeitgeist in a new and interesting way.  But, Steven was right.  Sometimes I need to recharge my batteries.  And I do have a few irons in the fire that need to get dealt with.  I'm not saying that i won't be back, because... ha.  I think we all know better.

But, again, if you're reading this... my sincerest thanks.  Whether this is your first visit to The Signal Watch or you were the guy prodding me via email to get on blogger in March of 2003, I appreciate the reads and the oddball friendships and relationships that have come out of sitting down for a bit every night and reporting out.

The world is a strange and often amazing place.  You all have made it feel like a good  place, too.

I won't go through a total list of names.  You know who you are.  I won't belabor my favorite topics.  We've got those covered in the "What we're on about" section over there in the menu bar. 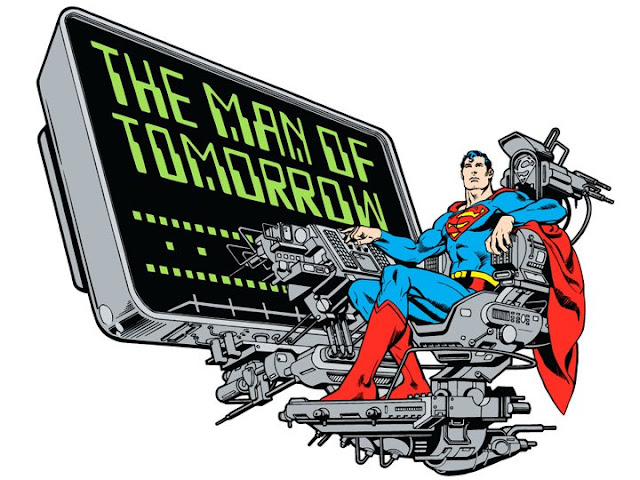