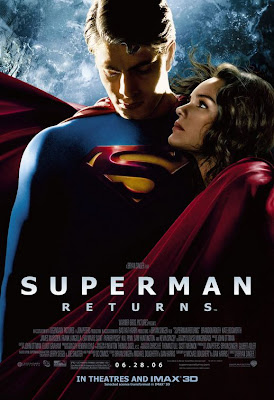 Of course, that's a tough sell for a summer movie audience that wants to see smashing, get a few laughs, and have the bad guy caught (preferably killed somehow ironically) in the final reel.  It's not difficult, nor is it incorrect, to get hung up on Superman as a stalker there at about the 1/3rd point of the movie.  You get the feeling that the very young screen writers and director Bryan Singer had a serious misstep there, and that there were probably three other ways to convey the information necessary for the scene and have Superman overhear Richard and Lois (he's got super hearing, and they do work together...).

And, of course, if you're doing a follow-up to Superman I and II and you're talking 5 years after those stories, you can' help but think some older actors would have better served the story.  But, this was the same Warner Bros. that tried to launch a Justice League movie with a bunch of 20 year-olds and geek actor Jay Baruchel as Maxwell Lord.  I'll never know what that was about - but it's the same thinking that led to Halle Berry as Catwoman vs. Sharon Stone and Ryan Reynolds as Green Lantern (vs. a blob of CGI).

I like a movie that - whenever I return to it - I consider some other angle.  And this time I just followed the heavy-handed Christ imagery of the movie and, in a lot of ways, can't believe they got all that into a big-budget summer movie.  More than that, I kind of can't believe how few fanboys seem to pick up on it as they descend into the "super stalker" echo chamber on the movie.

But I did really notice how much the movie fails to sell you on why Superman is so into Lois in this film.  She's utterly dismissive of Clark in this movie in a way Lois is not in any of the four Superman features with Margot Kidder, and not in a funny or playful way.

With this movie and it's reportedly epic original running time, I would love to see a 3-4 hour director's cut to know exactly what Singer was thinking in a lot of places, but I know we'll never get it.

In a lot of ways, Superman Returns is a nice bookend to the Superman movies started by Donner, taking the concept back to the epic roots and remembering that Superman doesn't need to just fight his evil opposite and that superheroism as defined by Superman wasn't just about punching the other guy until he stops moving.  But I also think that this pushed the idea of Superman about as far as you could take it and not change the basics of Superman so much as to make it unrecognizable.

One assumes the sequel would have necessarily been focused on Superman's kid, they would have had to kill off Richard to get Lois back with Superman, and they did have a continent-sized hunk of Kryptonite to deal with.

At this point, the movie is also already oddly dated.  It's amazing how much a smartphone would have changed the story of the movie, and people were actually still reading newspapers as recently as 2006.  Now, you have to assume people would all be reading the Planet on their iPads and Google tablets.  And a FAX machine plays a key role in the film!  It's amazing.

Next up I'll either watch the Donner cut of Superman II or All Star Superman, but we are only two weeks away from the new movie!  Wild times.