The problem, of course, is that the movie doesn't include the entire part of the script that was intended to demonstrate WHY Superman changes his mind (the second time, or, even, really, the first time).  Instead we get treated to an extended sequence of Clark and Superman swapping identities in front of Lois and Mariel Hemingway and a really awkward fight using the Statue of Liberty as if it's an ornamental vase in a 3 Stooges sketch.

Oddly, or perhaps overly optimistically, nobody in the movie cares when a single being decides to remove all the nuclear weapons from the planet - something that in 1987 would have been far more likely to have actually caused a nuclear exchange.  They applaud Superman's declaration that he's going to remove all nuclear weapons, which...  man, that seems so naive, its hard to believe that it made it into a printed script.

And I don't even want to get into the hilariously outdated struggle for the heart of the Daily Planet in an era when all news is tabloid news and conspiracy mongering.

As I understand it, there's a whole story behind Superman IV's production that's far more interesting than the movie itself.  Budget shortfalls.  Whole scenes never shot.  For some reason, key scenes that were shot aren't included.  A clunky Bizarro Superman sequence that precedes the appearance of Nuclear Man was axed (but shows up in the deleted scenes).  The threat of a nuclear war, which was sort of the threat of the third act and is referenced in Superman's coda - and which makes no sense without those scenes - is excised.

You can get a feel for what was intended by reading the Superman IV DC Comics adaptation.  (Hat tip to Jordan Gibson for the link)

By Superman IV, it's hard to guess what was going on with staffing.  Margot Kidder looks constantly frumpy and bedraggled next to Mariel Hemingway (Ms. Kidder's personal battles of the time may have caused some of those problems, I don't know).  Mariel Hemingway is lovely, but chirps away like a perky co-ed throughout most of the movie, with about two modes of line delivery.  Reeve is invested and sincere, but so many scenes are cut, it's hard to tell what's going on with his character through half the movie - and some bit with an energy crystal just sort of happens off screen.

The movie is clearly a family/ kids' movie, and in that, I don't really get why so much screen time is spent on Lacy Warfield (Hemingway) pursuing Clark - especially as it really doesn't go anywhere.  As a kid, romance could play a part of movies, but inserting a yuppie-culture-driven romantic plot that just makes kids feel awkward wasn't the way to go.*

And, of course, Lois and Superman have a re-hash of the flying sequence from the first installment, and it feels like last week's microwaved brisket.  Whatever was good about it on the first go-round just gets dried out and chewy this time.

With the Salkinds gone, Gene Hackman reappears as Lex Luthor with Jon Cryer - at the time a rising star - and somehow replacing the comically gifted Ned Beatty and all that Valerie Perrine brought to her role as Miss Tessmacher with a "totally tubular" Jon Cryer in a "punk" Halloween costume is a poor substitute.  Hackman isn't exactly phoning it in, he's Hackman and watching him eat a can of Spaghetti-O's is entertaining.  But he's not exactly got the same mojo that Donner managed to bring to the screen. 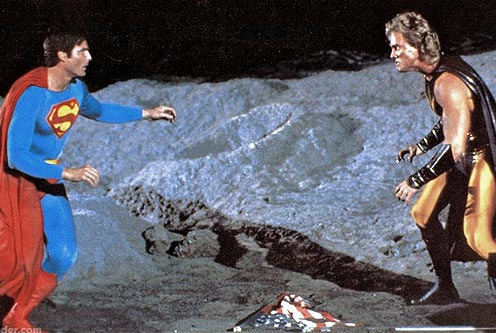 I won't go on about Mark Pillow as Nuclear Man.  He wasn't an actor, he just did his bit in this movie and then ducked out of the movie biz as near as I can tell.  He's completely ripped, gamely mimes his part, and nothing about the movie is his fault.

But you can blame the "above the line" folks, including the director, producers and executive producers who didn't have the money, vision or clout to make the movie that they had set to produce.

You can dismiss Superman Returns, and we'll talk about that movie soon, but at least they worked to complete the picture they set out to make (even if I'll never understand why they cut the opening Krypton sequence).

No lie, Superman IV is just a disaster - and so much of the problem wound up happening in the editing room, which I really don't understand.  In the end, the movie cost $17 million, made about $15 million, and had Burton's Batman not arrived two years later to huge box-office, I have no idea what the superhero movie landscape would look like today.

This was kind of the state of superhero movies prior to Raimi's Spider-Man and Singer's X-Men.  WB, which should have been shepherding the movies, just licensed out the characters and paid no attention to what was actually happening, and then blamed the characters and concepts when a terrible movie was released.  And, as all superheroes were seen as basically the same, it meant "superhero movies aren't marketable".  It was always hard not to see the studio execs as incapable of their own jobs back then, and Marvel's roaring success starting with Blade and X-Men as a kick in the pants to the prior twenty years of mismanagement.   And, by the way, WB is barely any better today.  We'll see what Man of Steel looks like, but Green Lantern isn't really any better than, say, Superman III.

As an end-note, I tweeted that I was watching this movie and got some good advice:  Watch the deleted scenes (thanks, Ruiz!).  It ties the movie together in a way that just trying to watch it straight does not.  I was shocked at what was excised from the final picture.  Also, there's a mention in an Onion AV interview of Jon Cryer's perspective on the movie.  (Thanks, N. Capp!)

I have now written about this movie twice, which is at least twice as much as I should have.  It's worth going back to see that previous post as I had forgotten almost everything in the ensuing six years and there's a kind of funny comment thread.

*aside from Lois and Superman, the romances I remember pulling for as a kid were basically only in Harrison Ford-starring movies.  Specifically in Empire and Raiders.
Posted by The League at 5/27/2013 11:39:00 AM