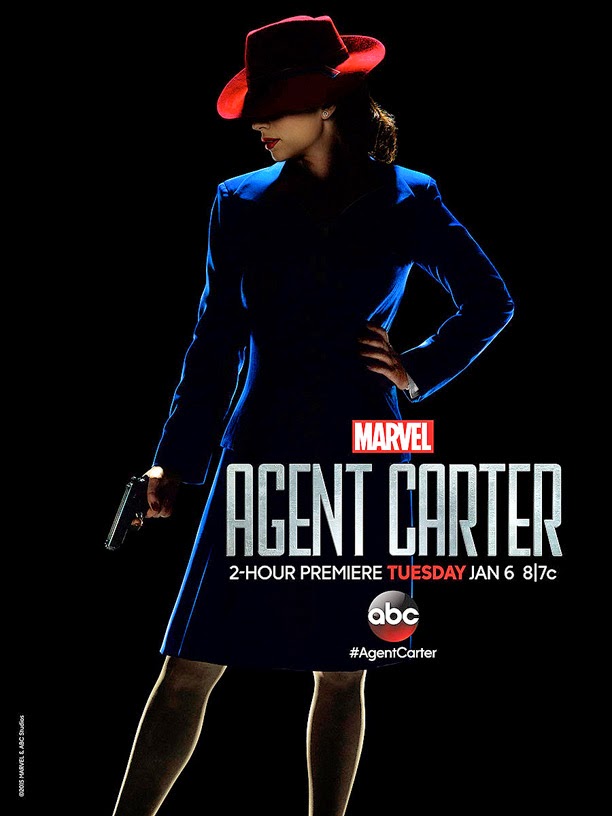 Haley Atwell was completely solid, and for a relatively unknown actress here in the U.S., she had absolutely no problem owning the show from her first appearance right up to the final scenes with Jarvis.  And - unlike so many shows that put lines in the mouths of actresses who seem confused by the dialog (Jennifer Garner, I'm looking at you) - Atwell was a rock at the center of both a great Marvelized international spy caper and a very well executed commentary on women's roles in both the workplace and action-oriented media.

The supporting cast of SSR agents, Jarvis (James D'Arcy), Howard Stark (Dominic Cooper), Dottie Underwood (Bridget Regan), and the really pretty great Angie (Lyndsy Fonseca) rounded out multiple characters who all made themselves distinct and, curiously, managed to work in character arcs across the show.  That's no mean feat for writers, show-runners or, especially the actors, across so few episodes of TV with so much going on.

Peggy's arc  - from nearly-shell-shocked at the loss of the nigh-irreplaceable Captain America, to the hero of the SSR is, perhaps, a foregone conclusion, but I can honestly say that, like a lot of shows I'm enjoying at the moment, it never really went anywhere I would have expected.  This wasn't some huge ruse to trick Peggy into proving herself (which was my initial concern with the show), it wasn't about how Peggy learns to love again.   Nor did it turn out to be a SHIELD origin story cleverly hidden under another title.  It was about Peggy finding her own two feet and proving she is the one who does best whatever it is that she does - whether that involves a machine gun or hitting someone with a heavy object.  Tenacity with a capital T.

The show did some really smart things, especially including the entire Russian escapade of letting Peggy do her thing behind enemy lines with the Howling Commandos.  That was a bit of genius to show her in her element alongside the Howling Commandos who fall in line and "do as Peggy says" as well as the guys who had her serving coffee, who realize she wasn't just "the office girl" but could take any one of them.  This, of course, also sets up a deeply complicated situation when the SSR began looking at her as a problem.

Of course you have to give Peggy her evil opposite, and the Dottie Underwood character was a great foil - right down to her bizarre chipper "Dottie" personality.

And, as someone who got a little misty seeing Peggy talking to Captain America on the radio as he went down in the Arctic, I very much appreciated the final scenes of the finale and the frenzy of Peggy's conversation with Howard Stark.  There was quite a bit there, and I tip my hat to actors and the writers for even thinking of that.

If I had one complaint, it's just one left over from reading way, way too many comics over the years - and that's that I find "hypnotism" and "mind control" a weak narrative cheat, and the show got into that a whole lot in the last three weeks or so of its run.  If they were going to do it, the show handled it fairly well, but...  man, that's right after "two superheroes meet and immediately punch each other for no reason" on my list of least favorite cape and tights tropes.

But, you know, overall, the show - even one I'd argue absolutely had an agenda - managed to get that agenda across with the whole "show, don't tell" school of  best practice for entertainment, in, frankly, much the same way Wonder Woman was doing back in the 70's.  Establish that the character isn't seeking outside approval and isn't defined by who she wants to kiss, and you can get really pretty far without compromising the whole enterprise with a bad choice or three.

You also have to like the relationships that do form with Peggy.  The Howard/ Peggy "Pal"-ship is established before Steve Rogers ever ponders the definition of "fondue", but the Jarvis/ Peggy and Angie/ Peggy relationships also help show a bit of extra dimension to the character you don't get out of a brooding loner-type.

I have heard Atwell (and Anthony Mackie!) may show up in Avengers 2: Ultron Boogaloo.  Very welcome news.  And while I don't know how one ties Agent Carter running around in 1947 or 1948 with the ongoing Marvel U, I'd sure like to see Marvel give this creative team and this cast another shot next year.

Yes, yes, yes. I've been reading reviews and all sorts of things going into this last episode (which the bf and I are saving for Friday night), and I've only gotten to love the show more.

The mind control thing bothered me too; I kept waiting for the chief to be playing the doc, but it didn't happen. But as you said, I really enjoy that the writers weren't trying to do either of those things with Peggy re: proving herself or falling in love.

And the Howling Commandos episode was awesome. As you said, it gave Peggy that part of herself back. She's always confident, but she got to really come into her own there, and that was just wonderful.

I read that for the Avengers movie, someone saw a 1940s dance hall scene with Haley Atwell and Cap, so maybe a flashback?

Either way, just a little over two months to the film, and I'm pretty pumped.

Was hoping for an announcement of a second season, but I haven't seen anything so far. If you see something, let me know.

I watched the final episode on the plane back home today and loved it. There better be a second season.

I want it to last long enough we see a baby Nick Fury running around with one eye in the first grade.