It's Sci-Fi movie day on Turner Classic Movies, and I'm doing some encoding of home videos and watching of movies on cable.

I first saw Forbidden Planet during the Paramount Summer Film Series, probably around 97' or 98'.  With my buddy Matt, come to think of it.


They tell me the movie is a sci-fi version of Shakespeare's The Tempest, but I have no idea.  I've never seen or read it.  But I have seen Forbidden Planet about seven or eight times, and every time, I like it better.  Sure, it stars Leslie Nielsen of Naked Gun fame in a dramatic role, which is weird, but it's such a great bit of its time and a snapshot of exploration sci-fi that is a now-kind-of-dead genre (and if you can't see the direct impact on Star Trek, you aren't paying attention).

The visual and audio FX in this movie make it an amazing experience, with the debut of Robbie the Robot, Krell architecture, amazing sets, spaceships, matte backgrounds that are truly massive and alien.  And even the hand-drawn animation of the Id Monster holds up amazingly well, in its way.


The performances range from rube-goof out of central-casting (Chef) to grand-scale melodrama (Dr. Morbius played by Walter Pidgeon) to ingenue (Anne Francis).

The music and sound are performed more or less exclusively on the Theremin, the classic electric wand, really-hard-to-play electronic instrument.

Beyond the visuals, I genuinely appreciate the movie's desire to create a world and kick around ideas in a way that the pulps and Amazing Scientifiction or whatever kind-of-classy scifi magazine from the 1920's- 1950's was always up for.  The exploration outward often meant the accidental discovery of the inward, and, usually, you wound up falling in love with a space princess in distress.   In today's environment of sci-fi replicating the flash and bang of past movies and improving on visuals (I guess, a lot of it doesn't do much for me), sci-fi doesn't always remember that it was both a mental exercise in exploration and hypotheticals for what we might find there.  The concepts were supposed to be about ideas more than the cardboard laser rifles and sparkler rockets.

In the past few years, for all the superhero and sci-fi movies out there, the only one to take on this sort of thing (as a major movie) has been Interstellar.  And, you know, maybe that's why I liked that movie so much when it seemed to get on a lot of folks' nerves.

You can't have "Oscar Sci-Fi Movie Day" on TCM without Kubrick's 2001: a Space Odyssey.  I can't exactly recall when I first saw the movie, but I know I watched it by myself in our family's living room in Austin sometime prior to 1990.  I have no idea how many times I've watched it in the interim, but let's say it's been a lot. 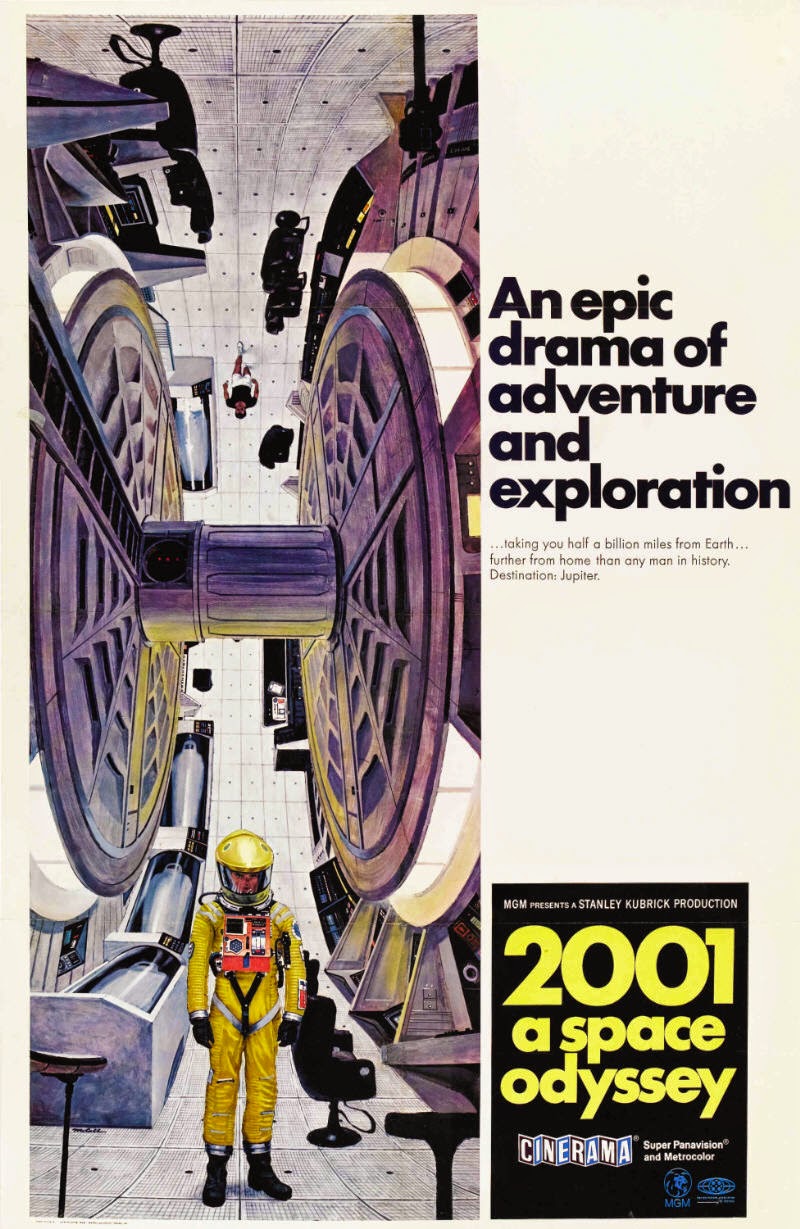 About two years ago I finally read the novel that was written in conjunction with the development of the film, and while the novel is excellent, it's surprisingly concrete in comparison with Kubrick's elliptical style of narrative.

For a movie with about four separate plots, minimal dialog, very little action, no romantic subplots, etc...  somehow the movie keeps me riveted every time it comes on cable or I pop it into the BluRay player.  It was the rare movie that had grand ambitions and, I don't think I'm alone in saying this, actually accomplished what it set out to do.

Like Forbidden Planet, it's a movie of exploration and self-reflection, and acts as much as metaphor as that movie for the exploration of the definition of humanity - while expanding the scope of what "humanity" means, or looking past the edge of what we think we might know.  In all of this, it may be worth remembering Sagan's suggestion from Cosmos: A Personal Journey - applying to both science and stories we tell ourselves


Some part of our being knows this is where we came from. We long to return. And we can. Because the cosmos is also within us. We're made of star-stuff. We are a way for the cosmos to know itself.

As with every viewing, there's always something extra there to consider, and this time I became focused on the shut-down of HAL at the hands of Dave Bowman, the deconstruction of the intelligence as both tool made at the hands of man and sentient entity made (and destroyed) at the hands of man in the scenes adjacent to Bowman's contact with the alien Monolith - a tool which pushed man beyond his capabilities as scavenger primate and which elevated the intellect on a curve towards stellar exploration.

There is a reason the HAL story is part of 2001,  and the machine-entity ultimately seeking self-preservation as the machine gets further and further from Earth is a thread I've considered, but not really put much into context in prior viewings.