While you chumps were all watching The Oscars, I managed to extend my Oscar-free streak to something like my 15th year* by watching the extraordinarily unnecessary follow-up to Stanley Kubrick's sci-fi opus, 2001: a Space Odyssey, the mostly ignored and relegated to condescension and jeers, 1984's 2010. 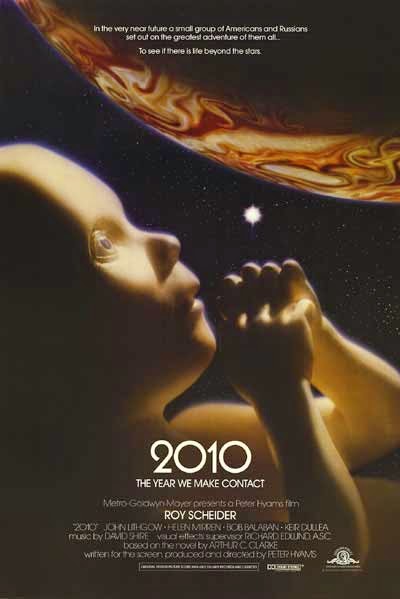 I vividly remember seeing the movie with The Admiral, who must have realized ten minutes into the movie I'd never seen 2001, because we hadn't even made it to the car in the parking lot before he kind of apologized.  But I was good.  I'd basically followed the movie, was pleased to see Roy Scheider in something, it contained spaceships and computers and danger and I felt like I was watching a movie geared at grown-ups and what was happening had not totally escaped me.  Honestly, it probably helped me better understand 2001 a few years later when I did watch it on VHS.

But watching the two movies on the same day, it's impossible not to note the tonal, narrative and other differences, and to see why Kubrick's movie - polarizing as it might be - is at least the one people remember and talk about.
Unfortunately, Hyams' follow up can't garner the same sorts of conversations.

Most obviously, Kubrick's movie ends in impressions and abstractions, whereas the Peter Hyams (that poor bastard, Quixotically deciding to follow in Kubrick's shoes) sequel is all pat endings with the bow put on the package - perhaps closer to the tone of an actual Arthur C. Clarke book, but it feels like an odd way to wrap a sequel to 2001.  And that is, likewise, tied closely to the large cast of the film which leads to tremendously more talking and conversation per capita.  Not to mention we wind up losing Kubrick's patented "why is everyone addressing everyone else in this formal, terrifying way?" dialog delivery.  Nope, just regular dialog delivery, including from the recast Dr. Floyd, played in 2001 by William Sylvester, but played by the always awesome Roy Scheider in 2010.

Kubrick's fascination with man and machine is central to the idea behind 2001.  Contact with the Monolith seems to lead the primitive ancestor of man to lift a bone as a club - to make tools of his environment.  He fetishizes the near future and it's ideal space-travellin' living, reliant on technology and incredible devices - descendants of the club - things to help man do more than which we are capable as organic, clumsy beings.  Not the least of these fascinating devices is HAL, the computer aboard the Discovery, a thing which fails us because of our nature rather than that of tools.

Hyams shows no such interest in doing this kind of heavy lifting.  It's hard to see similar, unspoken themes in the work when the movie is heavy with Cold War-era concerns and politics, asking East and West to hug it out and show how we'd all do better if we could just stop trying to nuke one another.  A very present sentiment at the time, but one that was 20 years out of date when we actually hit the year 2010.


The cast for the movie is really pretty terrific.  If you haven't seen it in a while, it's not just Scheider as Dr. Heywood Floyd, the focal protagonist of the second narrative thread in 2001 - the guy running the space agency who calls his daughter from the space station.  Helen Mirren plays the Russian commander, working through both Russian dialog and doing the accent without sounding ridiculous, and typically great.  Lithgow plays an American engineer, and one of my favorite actors, Bob Balaban, shows up as Chandra, one of the Urbana-based computer scientists behind the 9000 systems.  And, if you're looking, Arthur C. Clarke shows up in a cameo feeding pigeons on the lawn in front of the White House gates.  Zoey Deschanel's mother, Mary Jo Deschanel plays the wife of Dave Bowman in an oddly impactful scene I'm not sure should have worked but, man, it does.  And, of course Kier Dullea returns as Dave Bowman.  Sort of.


The FX are somehow lesser than those of 2001, done with the standard issue space FX of the time, really impacted by the blue screen work rather than the optical effects of 2001, and while models and planet footage blend seamlessly, occasionally things just look off  when humans break into the frame in space or an animated whatzit zips off towards the Earth or Sun.  But the design of the Russian craft - created by the legendary Syd Mead - feels functional and industrial in comparison to the contours and roundness of the Discovery - both solving practical problems, but with different approaches.

The use of "Thus Spoke Zarathustra" is necessary to 2010, but lacks the operatic impact of the silent worlds of 2001.  There's a standard sort of score underlying the movie, not as noticeable as Kubrick's use of classical favorites in his work - something intended as temp music but which he never let go of, tossing out a whole score written for the movie.  I don't want to diminish the work of accomplished film composer David Shire, but like Hyams taking on Kubrick, this was always going to be a thankless task.

As a stand alone movie, 2010 is surprisingly good.  It's well directed, has a strong narrative, the acting is never an issue, characters go through arcs and development.  It's just not a Kubrick film, and even Spielberg stumbled taking on Kubrick's sensibilities and style (if you didn't spend A.I. intuiting how Kubrick would have done this differently and cringing through the differences, you probably had a better time than me).

*I know you cats dig the award shows, but it's back-teeth-grinding programming for me.

You wrote this whole post and never mentioned the fact that Roy Scheider had a house where dolphins could swim into his living room. Might have been the best part of the movie!

The dolphins were certainly the part I remembered best from the first time I saw the movie, that and John Lithgow freaking out in space. I am not sure I want dolphins in my house. Dogs are enough of a challenge.