So... I had the benefit and/or handicap of seeing Avengers: Age of Ultron in its third weekend of release.  As always, a little context:

I was never a big Avengers reader growing up.  I was far more into Uncanny X-Men for my Marvel team book of choice, but I was also not a reader of Thor, Iron Man and most of the rest of the Avengers line up of characters, and only dipped in and out of Captain America, a book I had certain opinions about when it came to tone and what I was interested in reading.  Most of what I know about the Avengers comes from reading Marvel Super Heroes Role-Playing Game supplements and character guides, and via comic dork osmosis.

Thus, I don't have as many conceptual ideas regarding Avengers as I might about lots of other characters, especially from DC Comics.  But Marvel was always better about balancing character and plot, and so the Marvel characters have tended to be fixed points over the years in ways that DC characters so often seemed to struggle.  But if you ask me "what's Wanda Maximoff like?", I can give you a basic idea, and feel fairly confident, even if I only ever owned a dozen or so comics in which Wanda appeared. 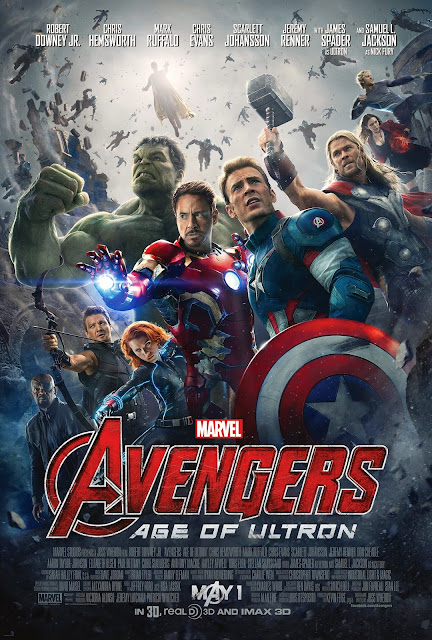 The movie has taken it a bit on the chin from clickbait articles and folks looking to weigh in, and I was under the impression this installment in the Marvel Cinematic Universe was likely to be something endured to make sense of coming MCU movies.

But, you know, I actually liked it better than the first Avengers movie.


Of course, I was never in love with the first team-up film.  It's fun, but it had more holes than a sieve.  Any movie with choices like Loki making good his escape in the back of a pick-up truck from a SHIELD facility feels like it requires banjo music and sets the precedent for a lot of "they really didn't bother with logic on this one, I guess" moments.

Now, that's not to say Avengers: Age of Ultron didn't have plotting issues and didn't wrestle with the basic constraints inherent in containing so many featured players, even for the considerable run time of this movie.  It did.

There was entirely too much hand waving about the source of Ultron's motivations and his supposed reflection of Tony Stark.  It became a half-finished thought that both never finished getting articulated and also belied literally everything we've seen on screen about Stark that drives his motivations.  And the introduction/ creation of The Vision was sheer hackery.  Everyone stood around saying "yes, this makes sense", and I assure you, were I in the room, my hand would have been in the air and I would have had a litany of questions.

The deviations from the comics, especially recent takes on Hawkeye, was a big surprise.  And, of course, the ties between Magneto and his progeny is severed thanks to licensing issues - but, heck...  we really can't cram mutants into the MCU, anyway, so, really... I'm good.

Speaking of the progeny - if you're going to introduce Scarlet Witch and Quicksilver (a guy really tangled up with licensing problems), the all-new motivations given to the characters makes as much sense as anything and helps keep things in the neat little package of MCU continuity.

As has been widely discussed online - yes, of course the movie has problems dealing with the two dozen main characters of the film and trying to make anyone or anything a central focus.  After 30-odd years of reading event comics and team books, this issue sort of ran off me like water off a duck's butt, because (a) that's what I expect out of these things and (b) Lucy just kicked me in her sleep, and in dealing with repositioning her to avoid future kickings, I forgot what (b) was.  Oh, right.  Math.

Yeah, when I go see The Dirty Dozen, I don't really expect for all 12 dudes to get much more than cursory treatment.  Maybe one or three of them will get ample character development, but this is part of a larger continuity.  Maybe not everyone watches these things over and over or has been trained by comics to expect this form of team story.

I was also pleasantly surprised by the sheer amount of chatter and consideration for not letting civilians get cooked that they worked into the movie.  Perhaps a side-effect of the drubbing Man of Steel and the DC projects have taken in the media for basically doing the opposite, but for a movie that doesn't really have time to spend on non-Avengery-type characters, they did okay with at least having everyone reasonably concerned for the safety of the poor humans caught in the cross-fire.

I've tried to avoid genuine articles on Age of Ultron until I could see the movie for myself, and certainly wasn't interest in tumblr screeds, but I had heard lots of rumblings about the "sexist" treatment of Black Widow in the film, and... man, I have to tell you, if what people were on about was her telling Banner she had no plans for kids, either...  I think we need to have a discussion about how grown-ups talk in both reality and fiction.  That scene was not what you think it was about.

In many ways, I felt like the first Avengers skimped on character development just to get everyone in the room a couple of times and then to get us to the wacky ending fight scene.  This one has more room to breathe, and somehow manages to give face time to the characters without their own movies.  The bickering here comes from a place, not from Brady Bunch "and then they squabble" talking over each other.

It is odd to feel yourself put in the position of defending a movie that was not particularly amazing - even if fun - and talking up a movie that felt like one of Bill Hader's Stefon sketches (Avengers 2 has everything!  Norse gods!  Angry robots!  An old tractor!  A floating city!  The Olsen Twins' lesser known sister!), but I kind of suspect Avengers-mania is about to pass into a new phase.  While everyone complains about superhero origin stories, once we're past that part, you have to start keeping all of the plots to all of these things in your head, or it doesn't hold.  It's the thing that always separated the comic enthusiast from the real comic dorks (I count myself among the latter).

My expectations for the movie were set to:  a movie in which the Avengers accidentally create Ultron, fight Ulton and beat Ultron.  And that's where I started and finished with the movie.  It did that.  Of course it's more than a wee bit disappointing that it's yet another superhero story where the characters were responsible for their own problem, but that's kind of the point of Ultron, so I was prepared.

I didn't love it as much Guardians of the Galaxy or Captain America: Winter Soldier, but, hey, I was never a huge proponent of cross-overs.