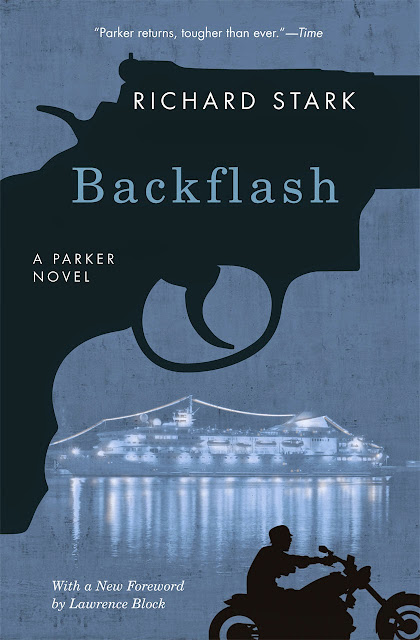 The second of the "Parker is back" novels of the 1990's, and by this time it's pretty clear heists are a damn hard thing to plot even in a pre-cell-phone era, but an era in which money is mostly moved about electronically.

Parker is called at his home by someone he doesn't know, someone already out of their depth, pitching a heist.  The score is a gambling cruise ship working the Hudson River on a trial basis, all cash for the night's take, a locked down money room floating in a river.  He calls in old favorites of the Parker novels, Sternberg, Dan Wycza and Mike Carlow as support, and a character a I didn't really remember from Plunder Squad.  More than one other party gets a whiff of the heist and try to deal themselves in, and, meanwhile, nothing about the guy setting up the heist makes sense.


The heist itself is pretty remarkable, a bit more buyable than other Parker heists (The Handle), and runs into complications without turning into the usual maelstrom of loose ends of the last few Parker novels of the 60's and 70's that made you wonder why anyone would bother with this line of work.

But, weirdly, sometimes Parker seems downright out of character in this book.  He doesn't just meet the guy who called just to kill him, he actually goes along with a heist that seems exceedingly high risk before they even start planning.  In prior books, no small amount of energy and prose was spent making it clear how Parker hid his home and identity, but in Backflash. Parker seems to shrug it off so the story can progress.  Small details like this that would have been handled differently in earlier novels pop up throughout the book, even if Parker does feel a bit much like his old "no loose ends" self by the last 50 pages or so.

And just random things seem left out.  There's no mention of CCTV on the boat which seems obvious, no mention of safehouses and staying in place after a job.  It's like Stark streamlined both the real world and the world of the novels in order to get to the thrill of robbing the boat and then lost interest.  And, while characters were always introduced a bit randomly with a shift to their perspective in about the 3rd section of these books, no one feels like a key player so much as just witnesses to the job who seem to start arcs that never go anywhere.

I didn't hate the book, but it doesn't have the same sharp edges of the earlier novels, and doesn't seem as cleanly plotted as I'd come to expect.  I've never read the Dortmunder novels written under Stark's real name, Westlake, so I don't really know if this was par for the course in the later part of his career.
But, whatever.  A mediocre Parker book is still a pretty good read.
Posted by The League at 5/14/2015 08:45:00 AM