As part of TCM's Summer of Darkness, this evening Eddie Muller showed 99 River Street (1953), a noir I'd somehow started once but never quite finished.  Given the issues we had with our last DVR, I believe that it just got pushed off the DVR when we accidentally recorded an all-day Archer marathon or something. 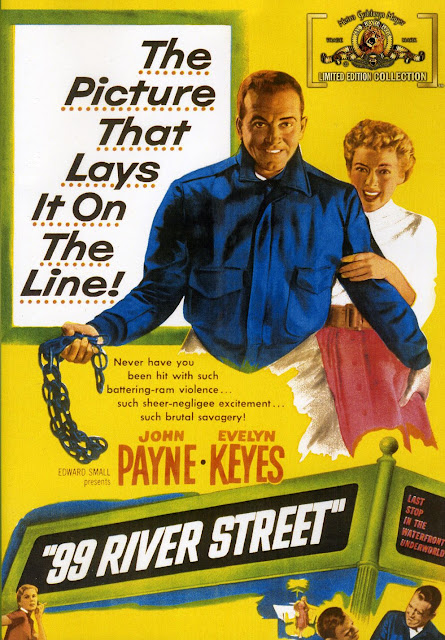 I'm not surprised Muller showed this one, but am, perhaps, surprised it took him this long.  I've heard him speak about Evelyn Keyes, a woman he met before her passing, and he spoke with tremendous admiration, and this movie fits as neatly in with the more rough and tumble noir as anything.  I've seen Keyes in a few movies, and she's a surprising talent.  Maybe more striking than beautiful, but with a certain calculating intelligence she brings to her roles that I like.


The movie stars John Payne of Miracle on 34th Street fame, a few years down the road from wooing Maureen O'Hara and moving into smaller pictures.  He plays a former boxer, no longer allowed to fight thanks to an injury sustained to his eye in his final fight.  He's now a cabby, trying to make the best of it, with a wife who now stews with anger at the failure she believes her life has become.  Underneath that pleasant face and calm demeanor, the fighter still roils, wanting to lash out.

He's friends with a small-time actress (Keyes) who dreams of making it big.  Ernie (Payne) himself wants to open a gas station, maybe have a kid or two.  But one night he finds his wife with another man (a man he doesn't realize has heisted tens of thousands on diamonds), and while they see one another, Ernie drives off.  At the drug store he runs into Keyes who takes him to a theater where she had a big audition, and admits she accidentally killed the director when he tried to take advantage of her.

Telling more is to tip the plot, and I'm a fan of the twists and turns this particular movie takes.  But as Payne gets pulled in, people keep seeing the cabby, not the prize fighter who sometimes disappears into a red haze and flying fists.

The movie is pure noir, even if its as far from something like Laura that's all style and class and people talking and double-talking as can be.  This is a man in a situation he can't control, put there by his own failings, his life turned utterly upside down in an instant.  And as a fan of Payne and Keyes, it really is a fun movie to watch.  Keyes has some brilliant scenes early on that should have gotten her more attention - maybe if they'd been able to match that same sort of intensity for her later in the film.

I also am not sure why I haven't paid more attention to Brad Dexter, who plays a heavy in this movie.  He's really pretty darn good.

I don't know that I'll watch this one over and over again.  It's not quite as visceral or cutting edge as, say, Gun Crazy.  But from a story perspective, this one feels like a surprisingly well-oiled machine, a working-class noir that knows how to throw a punch.