As you may recall, I recently read Tarzan of the Apes.   I don't tend to believe the cosmos is telling me anything, but I also try not to ignore coincidence.  Because, hey, serendipity counts for something. 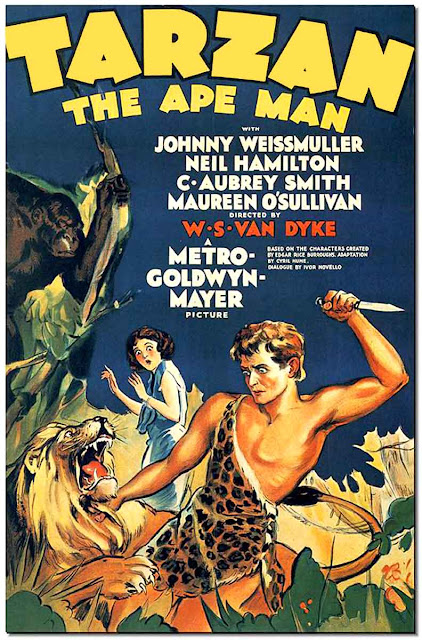 TCM featured "Ape Day", I believe, the other day, with all sorts of simian cinema, with everything from King Kong to Planet of the Apes to Every Which Way But Loose, and, of course, Tarzan the Ape Man (1932), the first Johnny Weissmuller/ Maureen O'Sullivan Tarzan movie.

I have seen this movie in bits and pieces, but I don't think I'd seen it straight through until now.  And, people, it's pretty amazing.  In fact, we're going to roll out our new feature... the Stefon.  So you'll know when: 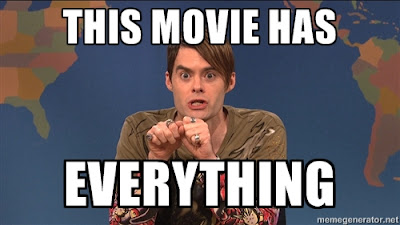 You're talking about an era where the best effects you could wrangle were usually rear-projection, matte paintings and jenky-looking puppets, and, make no mistake, this movie has those things in spades.  But it also has scenes that they must not have told the insurance people about, because, you know, you're just not going to see a grown lion attacking a human being on film these days.  And then the human wrestles with the lion.  Kills it, and then wrestles with a totally different lion.

Moreover, while the vine swinging isn't convincing as such, it's still some astonishing trapeze work featured so that when Tarzan is hauling ass through the jungle, that's really a guy in a loin-cloth swinging from trapeze to trapeze and doing all those absolutely crazy stunts.

Throw in whole herds of trained elephants actually doing some acting, a real leopard wrestling sequence, chimps running around, stock-footage aplenty, and that's the stuff that's real.  There are people in ape suits bounding around on tree branches, an army of little people in black face which I'm still trying to do the math on how many modern social mores were broken there.  And the guy who played Batman 66's Commissioner Gordon as Tarzan's rival for Jane's affections (Clayton in the book, Holt here).

No one is going to accuse Tarzan the Ape Man of being too progressive in its take on the goings on in Africa.   It's that complicated thing where they seem like they're respecting the locals, and then... blackface little people feeding Jane to a guy in a really iffy gorilla suit.

And, much like Frankenstein, Dracula and other contemporaries, the movie makes absolutely mind-boggling changes to the plot of the books as well as just changing character names for no discernible reason.  In this instance, we get absolutely no background for Tarzan.  The movie inverts the book, with Jane as the focus with Tarzan not showing up for a good half-hour of the movie.  With that in mind, once he does show up, the movie goes... bananas.

If you can get past Maureen O'Sullivan screaming "Tarzan!  Tarzan!" every two minutes, it's worth the price of admission to see the lengths they went to in 1932 to get this thing out there.  It's truly a wonder to behold.