I don't know how you people are wasting your life, but here's how I'm wasting mine: 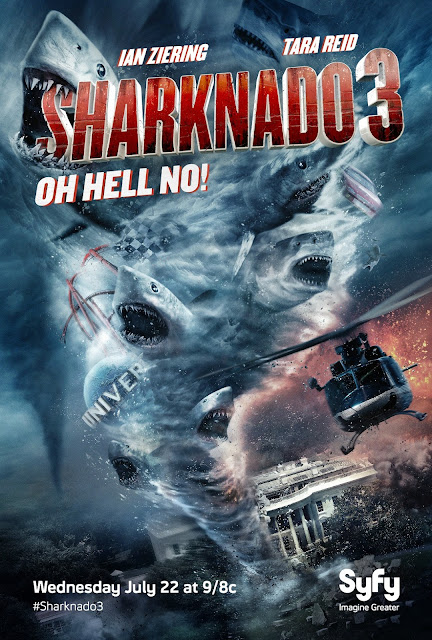 Thursday evening saw the broadcast of Sharknado 3: Oh Hell No!, the third installment in the Sharknado franchise which seems like it started a million years ago, but, no, apparently began in 2013.

The first Sharknado movie I caught on the 10:00 PM rebroadcast after twitter blew up and piqued my curiosity.  I hadn't initially tuned in, as the matching of the SyFy Network, slumming actors and sharks was absolutely nothing new.  For good or ill, I can't tell you how many shark-related Asylum films I've seen on the network, but it's been way, way more than I should really be talking about if I want to retain any credibility, anywhere.

In the end, the combo of clearly-not-quite-recovered actress Tara Reid, world's best sport Ian Ziering, veteran actor John Heard, and a water spout full of sharks making its way across LA was, indeed, chicken soup for the soul.


You don't need me to tell you that the movie became a very odd pop-culture sensation, something people kind of freaked out about in a way that was weirdly organic and, I think, genuine.  It's the reaction that literally any of the Asylum SyFy movies of the past decade could have garnered, going all the way back to Mansquito, but somehow Sharknado perfected the formula.

In summer 2014 we were given a sequel which has the added attraction of Vivica A. Fox.  I wasn't expecting much, but when a movie ends with our hero riding atop the back of a bucking shark in a tornado while chainsawing other sharks, I know I've made the right viewing selection.

Sharknado 3 made me think a bit of Machete Kills, which may seem an odd comparison, but both movies had predecessors that had swung for ridiculous heights and accomplished their missions, and both wound up refusing to stay in safe territory, and seemingly left nowhere to go - took it up a notc for the sequel. really, going all the way to 11.

I can't really sell you on Sharknado, because I've tried to show non-invested friends the first one, and got the polite silence thing.  Which is awful.  But I do like that the movie absolutely plays it straight, insisting on character beats that you absolutely would see in a bigger, better movie and maybe scoff at a little, but in the context of a storm generating tornadoes full of sharks... well... it's just a whole thing.  And, I'd argue, Tara Reid made the entire first film without really understanding what the end product would be, if interviews in the immediate aftermath were any indication.  And that's just adorable and kinda sad.

This installment is worth it just to see who shows up.  And it is, really, an absolutely astounding list of celebrity cameos.  It's not often I pause and say to Jamie "Is that former Lakers player Rick Fox playing a security guard?"  But, indeed.  Ann Coulter?  Check.  George RR Martin?  Check.  Jerry Springer?  Check.  And the cast of two different Today Show installments are part of the mix.  And that's just getting started.  Oh, yeah.  Bo Derek is in this.  Because, why not?

If the movie has a weakness, I am afraid they may be tilting toward explaining the Sharknadoes, which would be the midichlorians of the the series.  But, they didn't do it yet.  And after one of the most astounding endings ever put into a movie (seriously, the last 20 minutes are bananas), they had the chutzpah to just go ahead and offer up to the twitter-audience whether one of the major characters lives or dies for the 4th inevitable installment.

The movies lack the organic horrendousness of the first Birdemic film, something that's impossible to convey without seeing the movie, but that's like asking someone to read The King In Yellow to understand what you're on about.  But it's all in good, sharky fun.
Posted by The League at 7/24/2015 12:15:00 AM