As much as the folks write the introductions in these books want to say otherwise, when Stark came back to Parker after decades of being away, it's pretty clear his worldview had changed a bit, what he could and wanted to do in a heist book had altered.  But, you know, you're talking about the 15th or so book of the Parker series, and, if you include the 4 Grofield novels, this is the 19th written under the nom de plume of Richard Stark rather than Donald Westlake. 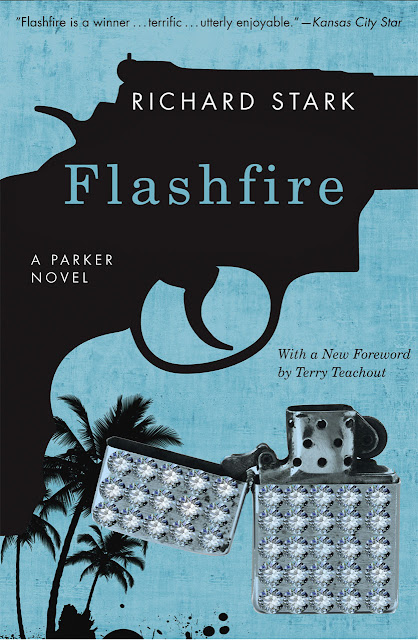 It's an oddly silly Parker novel, a pretty far cry from The Seventh or The Sour Lemon Score, and after however many years of writing Dortmunder novels, I have to assume it all bleeds together for the writer.  Also, as in the return novels, a lot relies on coincidence and hoping the reader isn't thinking too hard about possible holes in the plot.

For reasons I cannot discern, this book was selected as the launching pad for a potential Parker film franchise with Jason Statham as Parker in the 2013 film, Parker - a just simply strange casting choice, and Jennifer Lopez as Leslie, the real estate agent from the book.  I suppose of the books after The Hunter, this may be the novel most free of connections to other books in the series, but it's sort of light and fluffy in the plot department, and features little in the way of Parker's actual heisting.  What it does drive home is that Parker doesn't take kindly to folks who break their promises or steal from him.

I'm just not sure it was actually all that good.  I mean, it was fine, and I didn't find myself frustrated with the book.  But it seemed that it was just rife with problems from plot holes (hospitals have video cameras to watch people coming and going) to not quite clearly defined characters.  I just never got where Stark was going with Leslie.  One of the things I've liked in his prior books was his ability to paint a character just enough so that you knew what you needed to know with a few quick details.  But here...  Leslie just never gels.  It just doesn't quite make sense that she gets involved or makes the mistakes she does except that it added to the overall chaos of the book, and Stark loves chaos.

Further, it was kind of weird that he made such a big point out of the lack of chemistry between Leslie and Parker.  I mean, I'm aware in past books women just swooned because he's walked in the room, and this wasn't that, so it seemed like something to highlight.  But it just made Leslie all the more odd to include, unless she'll be a supporting character from here on out.

Parker, aside from perhaps displaying the first hints of real monogamy and engaging in goofy disguises (which seemed like the sort of broad-strokes thinking he'd have about such things), was often very on point as Parker, right up to and including him powering through the ending.  Stark may have changed his description of Parker from a sort of detached omniscience to maybe giving you an idea how the world sees Parker instead, but it was still nice to see Parker in fine form.

I'm also curious to see if there's another "Outfit" like device being set up.  It certainly seems to be, and it would certainly give some much needed velocity back to the series.