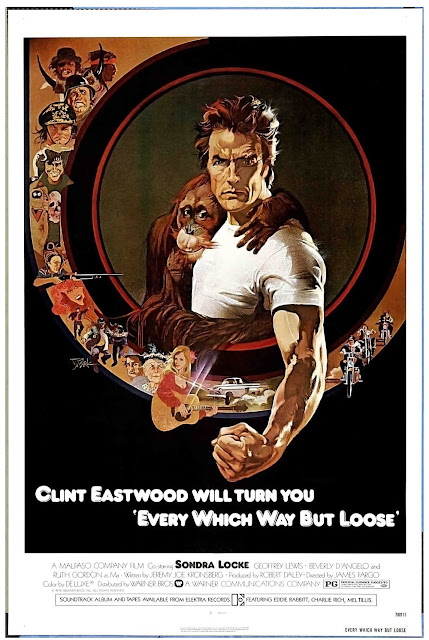 It's been about 24 hours since I finished watching Every Which Way But Loose (1978), and I'm glad that I didn't have time nor energy to write much about it immediately after turning off the TV.  I don't want to give the movie too much credit, but as the credits rolled, I was left thinking what an odd product of its time the movie really was.  And the more I thought about it, the odder the movie seemed.

It's action star Clint Eastwood, well established in everything from the Spaghetti Westerns he'd conquer to the Dirty Harry movies to Where Eagles Dare and Kelly's Heroes.  And then he goes off and makes a movie where it seems the biggest draw is the inexplicable inclusion of an orangutan that doesn't seem to really drive the plot.

Eastwood plays Philo Beddoe, a tow-truck driver who seems to know his only real skill is with his fists.  So good is he, he both never backs down from a fight and he earns no small amount of side-money in illegal bare-knuckle matches in parking lots and on factory floors.  He's distinctly blue-collar, as is the movie (something that would fade within 10 years), all of the characters scraping by and living outside of polite society.  Philo meets a lovely young country star, Lynn, and for once he seems interested in something beyond the next moment.

Lynn seems to be in some trouble with an ex, and departs somewhat abruptly.  Philo grabs his Orangutan and decides to follow her.

Along the way, Philo and his buddy (his brother?  I wasn't clear) Orville stumble across the same ridiculous biker gang over and over, the biker gang losing bikes and fights along the way.  And Philo accidentally draws the attention of a cop who would just as soon throw his career away to find Philo for the humiliating beating he takes in a bar.

Deep down, I think this movie was trying to be something a bit more than a movie about a guy, an ape and punching out dopey bikers and cops.  And it sort of succeeds.  There's a certain lovely pointlessness to the movie, a sort of open-ended road-trip mentality that wants to embrace absurdity that never quite ever realizes that usually there's a sort of point to the pointlessness.  Yeah, we get that Philo relates better to the silent ape than people and it's through Clyde that he works out that he's even having feelings, but, I dunno.  There's just not a whole lot of payoff that seems so close to occurring.

I'm not sure the kids are aware that as big of a deal as disco may have been in the 70's, country music was a sort of omnipresent force as well. Hee-Haw was a thing which people happily watched. The movie does have some nice cameos, and does have a pretty good theme song: