Because I like watching dogs on TV (ask Jamie), under other circumstances, I might have tuned in to this movie for about five minutes, realized it was terrible and getting worse with each passing moment, and moved on.  But I'm currently reading the Susan Orlean book Rin Tin Tin: The Life and the Legend (2011), and so I was curious, I guess.  Rin-Tin-Tin is a character who was already on the shelf by the time I was a kid, with occasional blips of relevance (I remember Rin Tin Tin: K9 Cop on The Family Channel circa 1990 as it ran at the same during the same era as The Family Channel's Zorro reboot, which I did watch), and I plan to talk a whole lot more about Rinty when I discuss the book. 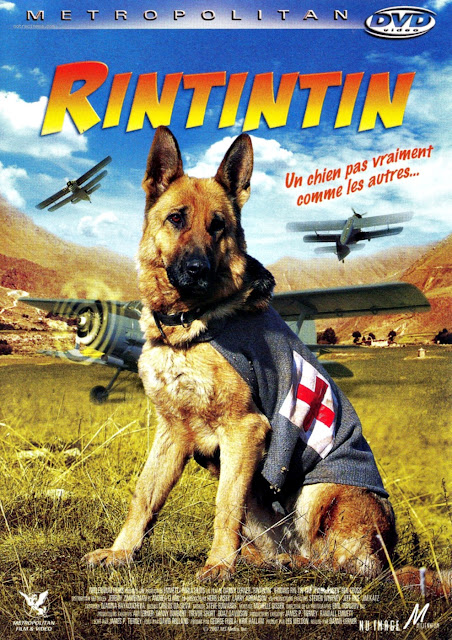 Let's just say...  there's a point at which when you're trying to get your independent kids' movie made where you've agreed to film it in Bulgaria with a cast of unrecognizable actors on a shoestring budget, that maybe it's time, as a producer, to take a hard look at your film and say "why isn't anyone wanting to put money into this?  Maybe... just maybe...  it's time to take a step back and rethink everything."  That clearly didn't happen here, and while I hate to say it's worse than the Air Buddies franchise - because nothing is worse than the Air Buddies franchise -  at least I understand that those movies are aimed at very young children and are more or less using puppies as digital puppets.  They aren't a weird munging of real history, fake history, the horrors or WWI played down for laughs and fart jokes.

This movie seems to be an unauthorized and deeply fictionalized adaptation of the life of Rin Tin Tin's owner, Lee Duncan, and his discovery and adoption of Rin Tin Tin on a battlefield in France.  It is true that Duncan found a mother German Shepard and her pups in an abandoned German kennel, and Rinty was one of those puppies.  But he wasn't a dog that wore funny hats, saluted with a fake paw in a tight shot, or who got drunk or farted out a whole train car.   I don't believe Duncan was ever a pilot, though he worked with the planes, nor did a goofy French stereotype speaking in cliches stick by him as a sidekick.  It would seem that the movie is based more on the studio press releases and spin doctoring of who Rin Tin Tin and Lee Duncan were, back when Hollywood just straight up fictionalized the lives and histories of their actors, because there was no Google.  Throw in some well-worn tropes and cliches and tremendously terrible line reading, and you've got our movie.

Look, this is just a bad movie.  The weirdest part is that they never bother getting Rin Tin Tin and Duncan out of France and into Hollywood.  The film-school-y title doesn't even work as the entire period of Rinty's life that gets covered, which is interesting in a way, is the WWI battlefield period.  Which is a very strange setting for a movie that seems aimed at the 1-10 year old set (hey kids!  Mustard gas!).  But there's no "discovery" of Rin Tin Tin, no learning about the dog's special nature, no mention of the potential for the dog.  Just wacky kid-movie hi-jinks centered around funny stuff like foiling a chef's black market robbing of his own food supply.  The movie also can't decide if Rinty is a cartoon or just a very bright and special dog, and sort of splits the difference.

I dunno.  I'm way over-thinking this.  It's just a dumb garbage movie that does a disservice to the actual dog and Lee Duncan.  And WWI.

As bad as the script, direction, cinematography and management of the story are... weirdly, the sets and costuming are really good.  And they have both vintage cars and a legit WWI-era bi-plane, which I think is a Camel.  It almost feels like someone didn't get the memo that this was going to be a garbage movie and tried.  Absolutely not necessary.  Ask the CGI team.

There is a absolutely a movie someone could make out of the Orlean book.  But we'll talk about that later.

In the meantime, you can safely skip this one, and if your kids are considering watching it, just get online and look up some old school Rin Tin Tin episodes on YouTube.
Posted by The League at 8/09/2015 02:51:00 PM

This movie is completely baffling. It really could have been made about any dog with the amount of Rin Tin Tin "history" that was used. Also strange: the channel clearly thought their audience would be elderly (I guess assuming they would be the only ones who knew/cared about Rin Tin Tin?) with the number of Life Alert and Robot Insurance commercials that were shown, but the movie itself seemed like it was made with 5 year olds in mind.

I personally enjoyed this exactly as much as one of the Buddies movies. So, as much as a root canal, basically.