Jamie's a sport and, thanks to that whole "we share a home" bit, she watches a lot of stuff she wouldn't select on her own (ex: The Keep).  But back when we started dating, one thing we could agree on was Aardman Animation's Wallace and Gromit.  We were both pretty big fans of Nick Park's adventures of an absent-minded inventor and his roommate/ canine companion, Gromit. 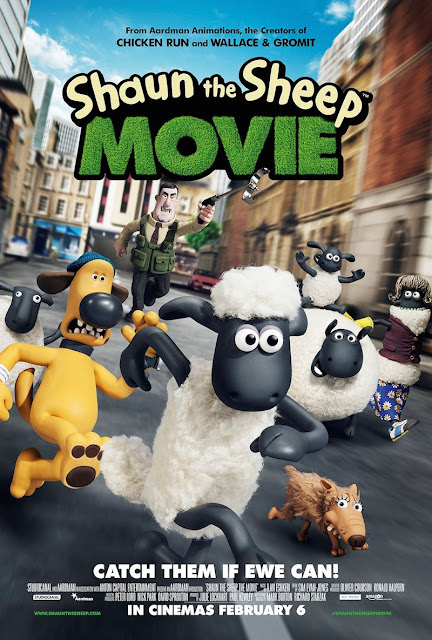 So, this evening, we made our way out to see Aardman's latest theatrical release, Shaun the Sheep Movie, a feature length of the animated TV series and Wallace & Gromit spin-off character.  The reviews seemed decent, I guessed, as it had a 99% at Rotten Tomatoes.

What I had forgotten, until the movie started, is that the Shaun the Sheep franchise has been aimed at very young kids.  So, you know, a 40 year old dude was not the intended audience.   But the thing about Aardman animation is that they've always focused on a broad audience, so parents need not worry about wanting to spend the run-time checking their cell phones and spacing out while inanity or Thomas the Train-level story-telling unfolds.

Reminder - I don't have kids, so I have only a passing knowledge of any of this stuff.  But I have seen the Air Buddies movies, so I know how bad it can get, and I feel for you people.

The Shaun the Sheep show, and therefore, the movie - exists in a world where no one uses words.  Sometimes there are things written down, but there is not a single line of dialog in the movie, which isn't actually a problem.  It's a creative challenge the studio has given itself, and we're all the better for the creativity the decision drives.

Shaun feels everyone on their idyllic farm has gotten into a rut, from the farm animals to the farmer, but he remembers better times.  And he seeks to take a day off and rejuvenate himself, and maybe his sheep pals, but things go awry, and, thanks to wheels and a steep hill, the sheep, Bitzer the dog and the farmer end up in The Big City.  And, hi-jinks ensue.

I don't want to give too much away, because this really is a cute movie, and if you've got little ones (maybe up to 3rd grade or so), I think they won't even realize there's no real dialog.  There's a clear story, clear characters, and it works in the best manner of both good animation and silent movie comedies (although music is integral to the entirety of the film).

As I said to Jamie on the way home - I had no problems or complaints with the movie.  I really liked it.  It was the polar opposite of how I felt while watching Finding Rin Tin Tin.   If the one thing I want is more of what I'm enjoying (there's a scene with sheep dancing across rooftops I could have stood another minute or so of, for example), that's a good problem for a movie to have. 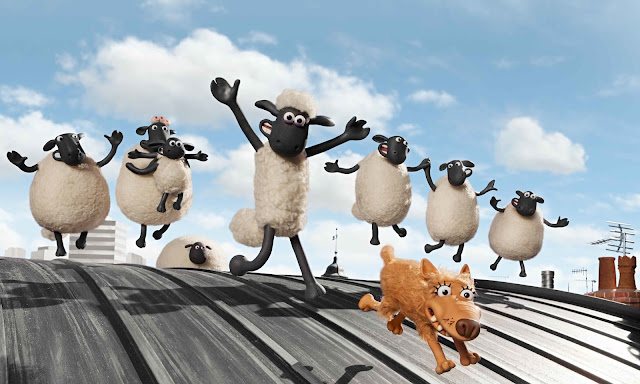 Of course, the movie is bombing at the box office.

The Aardman brand has never really solidified in the US, and without that "pre-awareness", it's tough to get parents to want to spend the money or want to sit in a theater themselves.   I can't blame parents for feeling that way, but I am often baffled by how something like Minions is worth the GDP of a minor European nation, but this movie can't break $5 million at the box office.

That said, I'm not sure the Shaun the Sheep demographic necessarily makes it out to the theater, but I hope that - if you've got kids, you check it out either at the theater or when it makes it's way to home-friendly formats.  The movie is straight up funny, it's cute, it's heartfelt, and has some terrific gags.  Nothing not to like here.  Even the villain, such as he is, is pretty funny.
Posted by The League at 8/09/2015 10:05:00 PM

I've seen the whole TV series (thanks to a kid at home), and it's great for the adults and the kids. It's the same premise - a small farm with no spoken dialog (well, the characters talk to each other, but nothing for the audience to understand other than context and intonation).

The best parts are the bully pigs, and the sheep scare them off with bacon.

I look forward to the day that you can take Raylan to see these movies- while I get to take a nap.

I won't ever take Raylan to movies. But i will buy him cymbals and maracas.