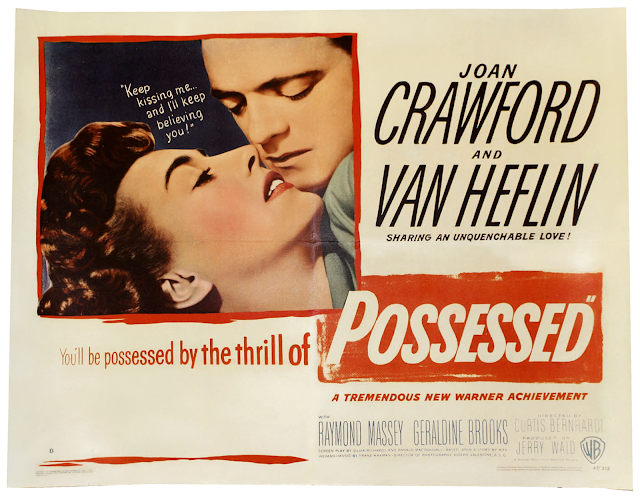 You know, I probably like Joan Crawford more than your average straight dude born in 1975.  Thanks to Faye Dunaway's performance in Mommy Dearest, the Joan Crawford of legend has superseded the Joan Crawford who shows up in her movies.  But watching those movies, you can see why folks decided maybe Joan was a little on the intense side.  And, her personal reputation as one tough lady did nothing to soften that edge (look up her rise within PepsiCo some day.  Absolutely bad-ass.).

To get real, Joan Crawford was a great beauty in the 20's and 30's when she hit Hollywood, and as she aged, maybe some of that slipped on her.  She remained attractive, but there's only so attractive someone can be when anger seems to their default setting, and you can see it set in somewhere in their resting face.  Here's where this boomerangs back - because Joan Crawford said "screw you, I'm still playing the sexy dame in middle-age", and did not just disappear into motherly, unsexed roles - and it kind of flips back on itself that the iron will in there somewhere is attractive all on its own.

Probably the first Joan Crawford movie I saw was Whatever Happened To Baby Jane?, which is a crazy movie to start to get to know Crawford.  I love that movie, and she's great in it, but Mildred Pierce, which I saw next, is still my favorite Crawford movie.  She's so damn good in it, and it's such a weirdly excellent movie for a movie about a lady making pies.

It turns out Possessed (1947) is sort of Yin to the Yang that is Mildred Pierce.  And I have new second favorite Joan Crawford movie (move over, Johnny Guitar).  It's not a mother and daughter coming up together in a tough world with lay-abouts for men and fried chicken joints as cash cows.  It's a woman on her own, trying to find love, witha  complicated relationship with her step daughter.  Oh, and she has schizophrenia.

This movie aired during TCM's Summer of Darkness as supplementary viewing to Muller's programming, but it's an odd fit as noir.  It certainly fits the bill as what we called "a woman's film" in film school - a movie that was demographically aimed at women from WWII until the 60's, and usually played up melodrama and complicated personal romances, and, honestly, put female protagonists through the wringer in a way that Scarlett O'Hara would thinks was a bit much.

Crawford plays a nurse to a sickly woman who has become delusional in her illness.  She's also madly in love with Van Heflin (always a dangerous idea), and he just isn't that into her.  The sickly woman commits suicide by throwing herself into a lake, and both her husband and Crawford are momentarily under suspicion,

But the film is really about Crawford's creeping descent into mental illness through the lens of 1947's latest medical breakthroughs via Reader's Digest.  It actually treats schizophrenia fairly decently, even while making it the centerpiece of a sudsy soap opera and being a bit ham-handed.*

The real attraction, of course, is Joan Crawford.  Specifically, watching Joan Crawford become unraveled over the course of an hour and a half, going through an ever-increasing checklist of symptoms of her affliction, all with perfect hair and immaculately dressed.  Because she's Joan Crawford, goddammit, and if she's going to play a lady experiencing an astonishing mental breakdown, she's still playing one with perfect make-up and in a perfectly crafted wardrobe (even her nurse's outfit has shoulder pads and that Joan Crawford silhouette.  God bless her.).

There's a lot of ways to watch the movie, and surely one of those is for high camp value, but the movie has some great scenes, beautiful photography, and is cleverly played out and paced, and surely plays on expectations set from Mildred Pierce, but which play out here a lot differently.

Someone with more time on their hands and a desire to do well on a paper could really get in elbows deep mucking about in this movie with a pre-Betty Frieden, post WWII woman and the world of a woman being mismanaged by her male suitors and wielders of traditional power.   It's enough to drive a woman crazy.  But I think I just wrote those sentences, and you can probably extrapolate the rest to your heart's content.

Oh, and, yes, this has Van Heflin, who is just awesome.  He's no Bill Holden, but I like his attitude, too.


*I also like the Audrey Totter thriller, High Wall, but that movie also seemed pretty sure we could fix mental illness with a single shot or just the right surgery.
Posted by The League at 8/11/2015 12:10:00 AM