So, mid-way through reading the Orlean Rin Tin Tin book, I ddi some Googling, as I had no real recollection of watching any version of a Rin Tin Tin movie.  Someone on eBay was selling an 8-disc set for $1 plus S&H, and for 8 movies, I figured it was worth the risk. 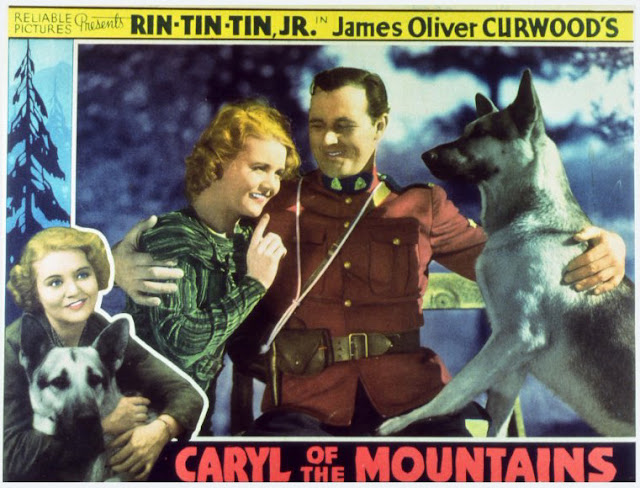 Caryl of the Mountains is a...  I have no idea.  53+ minutes of confused storytelling with a few pretty good stunts by Rin Tin Tin Jr., and the most lantern-jawed Mounty you'll ever see.  Pretty clearly low-budget, the movie is the sort of thing where you spend the first five minutes watching someone put mail in an envelope and lots of people talking when horses aren't riding.

This is the second Rin Tin Tin, one that never grabbed audiences in the same way that the original had managed to win over millions of people.  Of course, talkies hadn't done dog pictures a lot of favors (a point Orlean covers beautifully), and by '36, that had taken it's toll.

It's an interesting little time capsule of a particular kind of movie from a particular time, but it's not exactly something I'm suggesting folks run out and add to their collections.
Posted by The League at 8/12/2015 11:45:00 PM