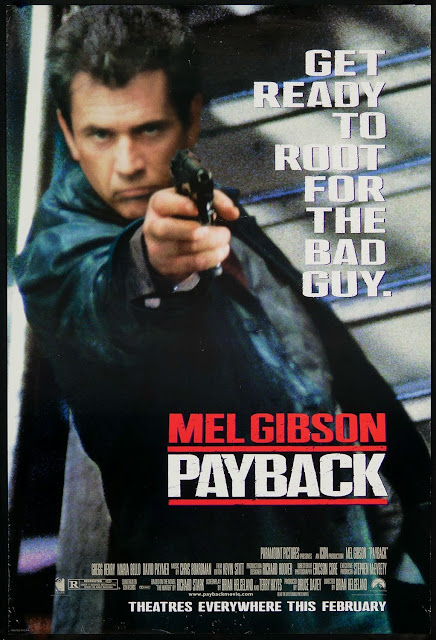 I've read the novel the movie is loosely based on, The Hunter, at least twice as a book (I think it's actually been three times.  It reads fast.), and I've read the Darwyn Cooke graphic novel adaptation at least three times.   And I've seen the Lee Marvin film, Point Blank, at least three times (once with Angie Dickinson in the room).  So, I have opinions.  But part of that was knowing that the movie wouldn't be a straight adaptation.  Author Richard Stark insisted on changing the name of his protagonist when his books were translated to film, apparently only okay with the character retaining the name if the movies remained true to the books, which they never did.*

I got pretty excited in the first twenty minutes of Payback.  It was remarkably close to the book, if with a darkly comedic tone rather than the molar-grinding intensity of the novel.  But I could accept the change, not that big of a deal.  Parker books were always a wink between the author and the reader, a "you think that was nuts?  How about this?" sort of one-upmanship of itself, leading more or less to the appropriately titled Butcher's Moon, after which, Stark took a break for two decades.

And then Lucy Liu shows up as "Pearl", a sort of unnecessary distraction not in the book, a hooker who likes to give and take a punch (a door opened by GoldenEye's "Xenia Onatopp"), and then there's a romantic plotline shoved in there (we have to have something for the girlfriends, said the '90's), which sort of defangs the point of The Hunter.  Hapless cops wander into the action for comedic relief, and, of course, Mel Gibson must have it in his contract that he will be tortured in every one of his movies, because there's the prerequisite "how will he get out of this?" bound-to-a-chair scene, and at that point, the movie is way off the rails and is now every other movie you'd seen between 1986-ish and 1999.

It's not much fun to watch a movie devolve over the course of its running time and fall into cliche and standard set-pieces especially when it began in a way you thought looked promising.  In the end, what kills this movie and killed 90's action movies, is that the highly recognizable beats and recycled actors doing recycled bits leave movies like this feeling hollow and pointless.  It doesn't matter how good the set-up or premise in Act 1, if we're in Act 3 and Mel Gibson is driving off beaten but heroic to go have implied sex with the girlfriend/ hostage obtained inbetween murders, there's nothing there to really latch on to or even find interesting.

Once you've got that out-of-the-box action movie feeling, what was earned in the opening reel now feels cheap and ridiculous, doing both the source material and work done to get the movie some attention and get made a disservice.

I didn't hate the movie, it just made me think a bit about why it didn't work, what likely happened (studio notes.  Lots of studio notes), and how that era of action movie-making wound up eating itself, paving the way for costumed adventurers and sci-fi CGI nightmares.

If you're thinking of watching this one, just go watch Lee Marvin in Point Blank instead.   That movie, no matter how different the plot, seems to have its head around why the novel and character work.

*immediately after Richard Stark (real name: Donald Westlake) passed, his family licensed the name and let someone make a mediocre Parker film called... Parker, starring Jason Statham, and not worth your time.

It might be worth checking out the director's cut. Apparently, the theatrical version came about due to Mel Gibson's desire to make the character more likable.

In another 16 years, I will seriously consider doing so. I kid. Saw this review, and it does make a compelling argument for checking out that director's cut.