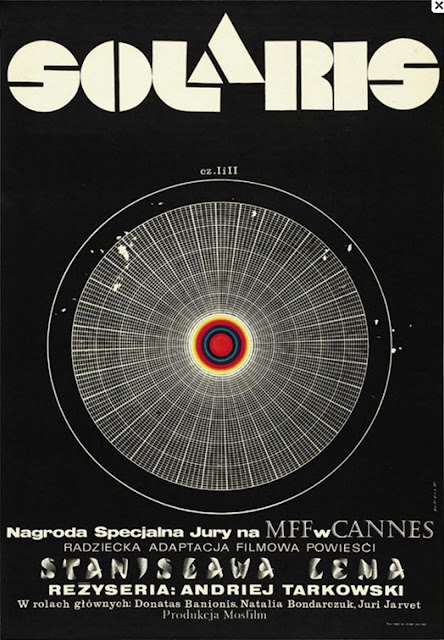 
Solaris (1972) is a Russian produced and Russian-language (I think) sci-fi movie about a psychologist who travels to a space station on the remote planet, Solaris, a world covered in a vast sea, with no land in site.  Exploration and science of the planet was once a foremost endeavor for mankind, but after decades of residency on the planet and with no real information gleaned, a decision must be made to either remain on the planet or move the station.  Oh, and the crew of 3 (down from 82 during the station's glory days) is acting funny.  And, oh, before Kris Kelvin leaves, a former pilot once stationed on the planet comes by to tell him he once saw a gigantic child form out of the sludge beneath the sea and look at him, only to find out - upon returning to Earth, that the sludge looked a lot like a missing pilot's son.

Once on the station, Kelvin witnesses bizarre behavior from the two surviving crew members (one has killed himself just prior to his arrival), and they seem to have guests.  Including the appearance of Kelvin's long-dead wife.

The movie is not a terrifically faithful adaptation of the novel, but in odd ways.  It wants to use the experience of the film as a mirror up to man's experience and frailty whereas the book explores what happens when that occurs in the text as man is probed and prodded by a consciousness that tears at the human psyche, trying to understand these small organic things floating above it's sea.  The movie focuses more upon the emotional human experience of both the amazing event and man's common emotional experience.  The book wades through this and comes through the other side wondering what this will actually mean for man as we come upon strange new worlds, and they reach back to us in ways that we are not yet ready to embrace.

I don't know that I have a preference.  Instead, it feels like there's two divergent stories stemming from the same question, and both are valid, both masterfully told.  Well, yes, I think I prefer the book, but I don't want to discredit the movie.  It's a bold thing, visually amazing, wandering into territory that American movies either shy from or botch, asking what we think we're doing testing ourselves out there rather than resolving our issues from person to person.  Maybe the novel's tackling of the inevitable frustrations of space exploration resonates with me just as well or better, and I certainly appreciated the slow unravelling of the novel versus that of the movie, with more rewards and richer payoff.

But there's some interesting filmic work, stuff that I felt I had an advantage to grab onto from the beginning of the film thanks to my prior knowledge of the novel.  Anyway, there's a lot of comparing and contrasting of what it means to be a sea of a mind going on there that's blown past as we see Earth, networked and humming.

I'm curious to see the 2002 American version, which is, apparently, a remake of the Russian movie rather than the novel.  So, one of these days.

I'll be honest, I had every intention of letting this be 'one of Ryan's movies I end up only giving half of my attention and may end up going to bed before it's finished'. Approaching any subtitled movie this way and expecting to have any idea what is going on is just crazy, but I think even if my understanding hadn't depended on reading words on the screen I would have been mesmerized. It's a beautiful and fascinating movie. There isn't even any dialogue for the first little bit and I couldn't look away. Really great stuff.