Back this last summer, we read the novel The Martian by Andy Weir, and so it's kind of hard to ignore that fact as we roll into discussing the movie.

On Saturday we headed out to the Alamo to see The Martian (2015) in 3D directed by Ridley Scott and featuring a busload of name actors - headlined by Matt Damon as astronaut Mark Watney.  As one would expect, the movie has some changes from the novel, cuts a lot in order to work as a movie (and for time), and makes some extremely minor plot changes.  But, in general, like a lot of book-to-movie translations of the past decade of newer, very popular books, there's a tremendous fidelity to the source material (funny how it only took movies a century to figure out people liked for these things to match). 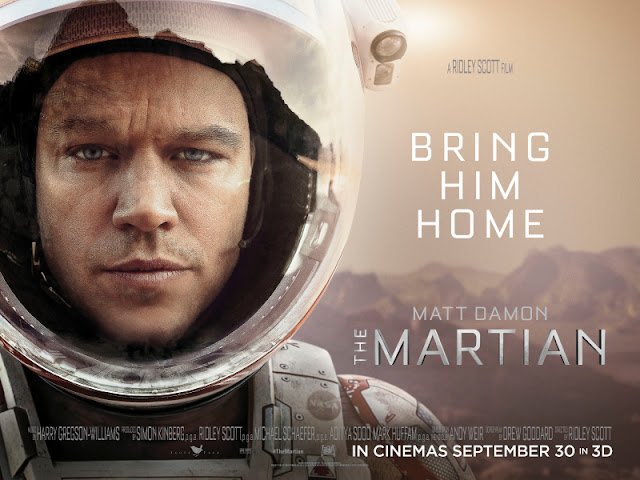 Just like the book, the movie is about a Mars mission in the very near future which experiences a surprise weather event which surpasses expectations in terms of severity and thus threatens the crew  NASA protocol insists that the crew scrub, get to their launch vehicle, escape to their orbiting spacecraft, and return home.  As the crew leaves their base, Biologist Mark Watney (Matt Damon) is struck by a piece of loosed debris - the antenna - and is sent hurling over a hill, his bio signs offline.  Presumed dead, the crew takes off, leaving Watney on the planet's surface.

Watney re-awakens to find himself alone, with no means of communication with Earth, and supplies in the "hab" will account for only a short amount of time on the planet.  And the lack of moisture, and living in a structure that was never intended to last forever against the Martian environment are just the start of his woes.

The loss of an astronaut is a disaster for NASA, and Watney is given a hero's funeral, but within days, a staffer at NASA notices evidence of Watney's survival on satellite photos of the base and things back at NASA and JPL go into overdrive.

Much like the real-life story of Apollo 13, the movie is about the teamwork, ingenuity and endurance of the engineers and scientists of NASA/ JPL and Watney himsel, and - in a stroke straight from the book that will certainly help sell the movie in the all-important Chinese movie market -  a partnership with the Chinese space agency that leads to a greater chance for Watney's survival.  It's also a testament to the brave women and men who gladly board spacecraft in the most dangerous conditions to push the boundaries of humanity.

Much of the book is related in journal form as Watney explains and recounts the problem solving that he's undergoing in order to progress toward ultimate survival.  With no one to talk to (there are no volleyballs on Mars), Watney speaks to the video journal, captured here in multi-camera coverage around "The Hab".

Probably the biggest difference between the book and movie is that the book is terribly specific about what Watney is doing to survive, whereas the movie does a bit more handwaving.  Really, the book is a step-by-step progression of problem solving, both on Mars and on Earth, with the occasional mishap from natural mistakes and issues and from the occasional screw-up.  The movie, however, can't spend the same amount of time doing math about calories and potato consumption.  It's important, and we get it in broad strokes here, but it's not relayed at the same obsessive detail.  And, a slew of misadventures and challenges are bypassed so the movie does not run 15 hours.

But what the book can't deliver are the same stunning images that Scott and Co. create in vivid detail.  From the Martian landscape to the space-scapes to Earth from near-orbit.  Even the Hermes spacecraft in motion or passing the camera is an object of technological beauty, complete with rotating center for a gravity-reproducing centrifuge.


Like the book, the Mark Watney of the film does not give in to despair.  And I know this is a bone of contention with some who read the book, and, no doubt, who watched the movie.  We've been trained to expect any bad situation for a character on film or in books to end in madness and crippling depression.  And I'll go ahead and say this:  That's some weak sauce.

Some people are survivors.  Some people are genuinely ingenious when presented with challenges.  And, in particular, astronauts are selected for matching the profile to overcome intense pressure and danger.  But, more than that, I think we have enough stories, especially in science fiction, that reflect how sad we'd be without our creature comforts or easy lives.  We presume we'd want to become depressed and choose an easy way out.  What's crazy is that's such 20th Century/ 21st Century thinking.  We're the same species a couple hundred years removed, that once road on horseback across great unknown vistas in the American west, facing untold danger and often isolation.  People sailed on wooden boats powered by wind and currents and were shipwrecked but made it out.

So, you know, your criteria for "I'd never make it" may be true.  We're 21st century computer typers.  I'm dumb and bad at math.  Of course, no one is looking to put me on a rocket and pioneer for humanity.  But we can do this.  It's not impossible, you big quitter.

Last night I stumbled across a few comments online about some of the curious casting of the film.  I, too, assumed young NASA staffer Mindy Park of the book was supposed to be Korean-American based on the last name.  I don't recall the novel ever specifically stating she was Korean-American, but it's not an outlandish assumption.  One I made myself when I went to pick up a candidate for an interview and walked right past her as I scanned the room for someone of Korean descent.  Still, I don't think I was alone in this one, so I'm not sure why they cast the fair-haired, blue-eyed Mackenzie Davis as Park, partially because I think she's one of the weaker links on the already lazy Halt and Catch Fire.  Here, she's put in a corner where it feels she can perform effectively.

More mindblowing is the casting of actor Chiwetel Ejiofor as the very obviously Indian Vincent Kapoor.  Ejiofor is terrific, but it's a terribly odd decision.  They even go so far as to add character back story about a Hindu father and Baptist mother.  I don't want to be unkind about Ejiofor's performance, which was great, but it has to be kind of strange to realize someone is hiring you because they think all non-lily-white actors qualify as one another's ethnicity.  And they hop over the 1 Billion Indian people on Earth for their choice of actor.  Kind of weird.

Hollywood is a strange, strange place, and for all the accusations of the overly liberal biases of the place, they struggle mightily with race.

The movie also contains Kristen Wiig in a severely watered down version of Annie Montrose, the foul-mouthed communications director for NASA.  You won't know the difference, just find it odd Wiig is in such an insubstantial part, but I have to think it was cut down quite a bit from the script and book (because she'd nail the character how it was in the novel).  Jeff Daniels plays the head of NASA, Sean Bean the flight director, and the flight crew contains some great performances, particularly by Jessica Chastain as the guilt-ridden Commander Lewis (and I'm always happy to see Michael Pena).

Scott's direction is some of the sharpest I recall in years and years, and far surpasses the mess he made of Prometheus.  His affinity for detail in every frame is on fire in this film, and with a melding of near-future technologies and the vistas he can put into the frame, it's a beautifully realized film.  Not to mention some of the performances he pulls out of his actors, both name and otherwise (the guy who played Bruce Ng - Benedict Wong - felt just totally believable in every respect).

The book more or less dictates the soundtrack to movie as the stranded Watney realizes the only entertainment he has along is Lewis' collection of 70's TV shows and disco music, so, expect some pretty spot on disco music cues, and a surprisingly effective use of David Bowie's Starman (I know.  I expected Is There Life on Mars?, too).

My recommendation at this point is to go out, watch the movie, enjoy the hell out of it, then go read the book for the complete picture.

Just like the novel, the movie speaks to the audience in a way audiences are so infrequently addressed.  It's a movie about the greatness of science, of pulling together for a great purpose, and not about kicking the audience or shooting puppies to elicit an emotional reaction or to feel "important".  It's a movie that suggests it can all be worth it, even (and maybe especially) in the face of adversity and disaster.  We'll make mistakes, we'll lose some heroes along the way, but these are people giving themselves to a cause they believe in, just as so many do every day in so many other ways that we never question.

But it's also a celebration of science and engineering, advancement and duct tape.  In an era when we've reverted back to the notion that ignorance is a virtue and talking heads screech out in terror at science undertaken for any purpose other than corporate profit (and any results that don't support corporations seen as "inconclusive" or "insufficient"), it's good to see a narrative that's a romance with intellect, exploration and ingenuity.

I finally saw this last night, and really thought it wasn't good. It seemed like they didn't know whether to make it a piece about Whatney and his solitude on Mars alone, or a ensemble piece about the people on Earth, so they just kinda made the movie they made. I also really didn't like the beginning where they kinda painted Lewis as a hardass and Whatney as a jerk to her. Just seemed like bad storytelling to me. I also didn't feel like the stakes were ever as dire as they were in the book. I realize they have to trim out most of the book to make a run time (and really, it probably would have worked better as a mini-series), but I just didn't like a lot of the choices. I really liked the performances out of many of the actors, but just felt movie didn't live up to the book at all.

I think you accidentally watched this: https://youtu.be/SEpHyC72gss