Bevo XIV Merges With The Infinite 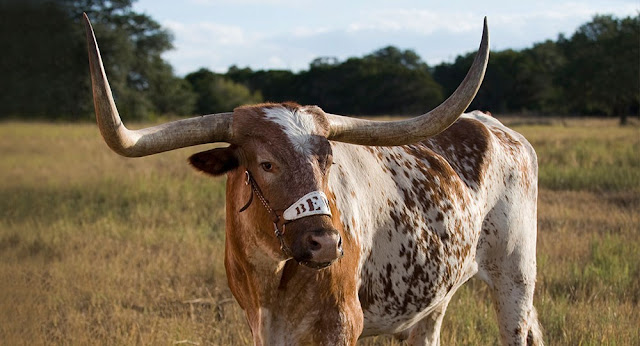 The beloved mascot of the University of Texas, Bevo XIV, has passed.

The University of Texas has had a Longhorn Steer as its mascot for about 100 years, back when it was hilarious to bring a steer to a football game.  And, hey, it still is.

The name of "Bevo" is somewhat shrouded in legend and mystery, referring to a brand of near-beer popular in the early 20th Century, and there's a very complex story about Texas A&M kidnapping the steer back when he was named "Bo" and branding the score "13-0" on his side, which was changed to "BEvO".  I dunno.  It's possibly apocryphal, but I'm not one to fight the legend.

This Bevo has been around for a while.  I believe he was in place way back when we won the National Championship, but I'd have to check.  He's been a good steer.  And, unlike the first Bevo, we won't eat this one (Texas is a hard place, man).

Usually, Bevo hangs out in a sort of open pen on the sideline, drugged just enough (I assume) so he doesn't flip out when the Cowboys spirit group fire off "Old Smokey", the cannon that goes off every time we score.  Secretly, I always want to see Bevo rush the field and clear the whole area, but he's always pretty mellow.

Animal mascots don't last forever.  Texas A&M has Reveille, their cute little dog, and Baylor used to bring a baby bear to games in the 90's (I'm not sure if that's still something they do, but a bear lives on campus).  And A&M has taken exceedingly good care of all their Collie dogs.  But you need to have the character that bridges those generational, animal mascots and be a cartoon.  So, we also have Hook 'Em, which is what you call the character mascot who runs around in a costume whooping it up.  I like both.

We'll miss you, Bevo XIV, but we also know you lived literally the best life a longhorn steer is going to in this world or any other.  We appreciated your service.

You guys ate the old Bevo? What kind of weird ritual is that?

I think it's safe to say that what a mascot meant in the leather-helmet days, and the purpose of a cow in Texas in 1920-ish, may have produced results we can no longer relate to in 2015. That said, they also let Bevo just wander campus until he hooked a few students and it was decided he should live elsewhere.