Well, this weekend and today have turned out to be just an amazing few days in sports-watching.

I didn't grow up watching baseball.  I started watching it with Jamie's mom.  I think we started watching ball when Jamie was in the hospital and then just because, hey, baseball.  It wasn't my Old Man who taught me the rules of baseball, it was Jamie's mom when I was 20.  They were kind of the team I liked, anyway, because as a kid I'd watch them on WGN mostly because I thought Harry Caray was hilarious.  I was an adult before I found out - literally everyone thinks Harry Caray is hilarious.

Later, when the Cubs played the Diamondbacks when we lived in Phoenix, we'd always go to at least one game, and I really regret only ever making one Spring Training game, because it wasn't all that far from our house.  And, we did make it to a Cubs game or two at Minute Maid Park before the Astros changed leagues.  I'm still trying to plan a vaycay in Chicago next year to make it to a couple of games.  I've only been to Wrigley once, but it was incredible.  I like the new mega-stadiums, too, but seeing the Cubbies at Wrigley was just a blast.

Anyway, the Cubs have been just entirely terrible for most of the last 100 years.  The fanbase, as near as I can tell, has some weird, masochistic thing going on where you learn the virtues of patience and eternal hope, because you never know when this year might be your year.  And, for Cubs fans, it just never is.

But this year, it's literally been a whole new team with a new manager (the only real hold-on has been Rizzo, who I like a lot).  But I didn't get to watch at all thus year because stupid WGN quit broadcasting games outside of Chicago, so near as I can tell.  Well, I dropped $25 on the MLB network the last month it was relevant, and watched the Cubs through September and now, I'm getting to watch them play in October. 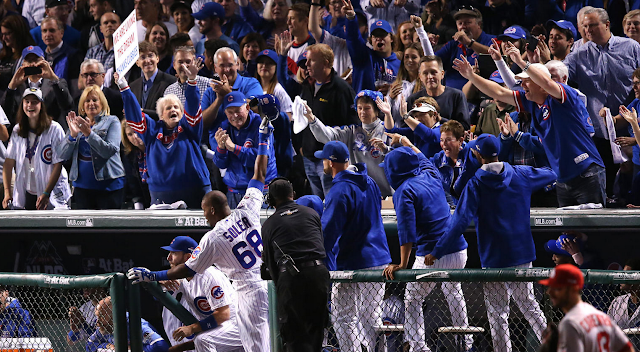 Anyhow, we're now 2-1 in a best of five with the dreaded St, Louis Cardinals (and we beat the Pirates, which... frankly, I was at least as scared of as St. Louis).  And we play at Wrigley again.

It's a lot of fun for us to watch.  Jamie's mom has passed and I wish she could have seen this upswing for the Cubbies, but her dad, who has followed every Cubs season since he was a little kid growing up in Illinois and is now a few years past retirement, is ecstatic.  Lots of phone calls being exchanged after Cubs wins around here.

To give you an idea how surprised the Cubs fans truly are about this turn of events, their current hashtage of choice is not some grandiose phrase, reaching for epic status.  It's #wearegood.

So, let's talk some College Football.


Texas Longhorns versus the vile Sooners of Oklahoma

I didn't write up the game from the previous Saturday because, frankly, I got so pissed off before halftime, I got up and left the house so I didn't have to deal with the feelings of sadness anymore.  UT had played well-to-all right in the prior games, despite their record, but when they had to play the Horned Frogs of TCU, a highly ranked team, certainly, my mighty Texas Longhorns seemed to show their true colors and just absolutely fall apart.  When I turned the game off, it was 30-0.  By the actual halftime, it was 37-0, and the final score was  50-7.  It was ugly.

I am not faithless.  I planned to watch the annual Red River Showdown/ Shootout/ Rivalry game, whatever we're calling it this year.  When Texas plays Oklahoma, anything can happen, but it didn't look good.  Oklahoma was ranked 10th in the polls, and UT was... not.  It seemed when we played teams of real caliber, we'd fold like a card table.

Well, that is the opposite of what happened. 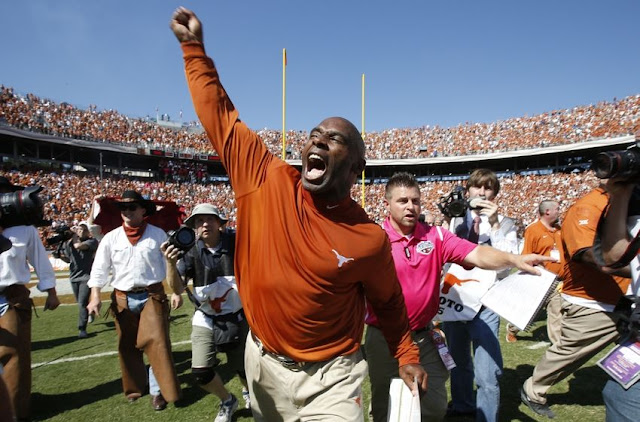 A UT team showed up in Dallas (our neutral ground meeting spot for the rivalry game) that played every play like their best plays of the year to date.  Everyone seemed to have a role and had internalized those messages about how much a stupid penalty could hurt the team.

Long story short, we had a massive, un-expected win that wasn't even a "come from behind" sort of scenario.  UT more or less had Oklahoma's number right out of the gate, and we won.  It got a little dicey in the fourth when it looked like "oh no, this might get away from us", but the defense stepped up, and, hey, 24-17 for a totally unanticipated victory!

I had planned to have the game on and do some decorating for Halloween to help cut through the sorrow, but I couldn't stop watching.  And then, in the third quarter, I got so tense I wound up decorating anyway to keep myself a little distracted.  At the end of the game I was just standing about eight feet from the TV saying "did we just win?  Did...  we just win?" and was assured, yes, the team had pulled it off.

This should keep the nay-sayers at bay until next season, no matter how disastrous the rest of this year goes.  A lot of us want to see Coach Strong get a chance to build this team how he'd like, and given the culture he's working in, that could take a while.  But he showed the team he's been talking about.  They're young and they're having to learn how this works in front of national TV audiences.  A pretty big leap from Friday Night Lights and a couple thousand people mostly there to see the kids in the marching band.