Lagoon Watch: The Creature Walks Among Us (1956)

I quite like the original Creature From the Black Lagoon.  It's just really well shot, has a compelling story, and it is nigh-impossible to beat the creature design.  I just love the way that fella looks. 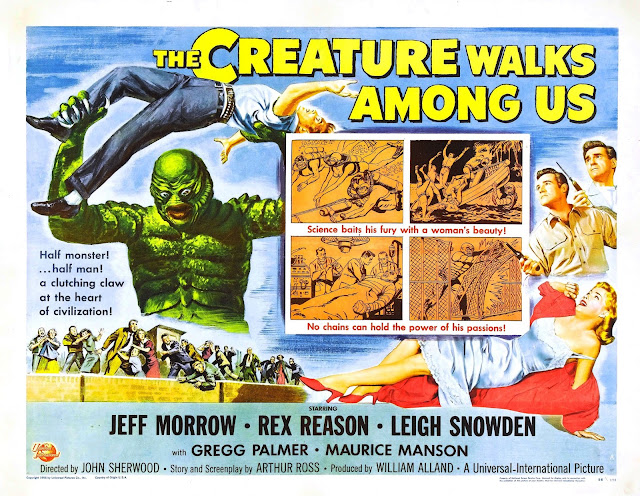 I'd love to see an updated remake, but when I consider what it'd be like without Julie Adams, well, I have a moment of pause.  And it's that moment of pause that's kept me from ever watching the sequels, two of which I own on a DVD set I purchased at least a decade ago.  But I told myself I was going to watch both sequels this October, because, hey... why not?  I mean, aside from the glaring mistake of not including Julie Adams.

Alas, we're not here to ponder Julie Adams.  We're here to talk about the inevitable Universal sequel, The Creature Walks Among Us (1956).  Actually, it's the sequel to the sequel, but I watched the damn things out of order, so, there you go.

In this movie,  the guy who played Exeter in the sci-fi classic This Island Earth pulls together a really fancy boat and a bunch of scientists to go find a Creature that's hanging out in the Everglades.  Let's be clear, this guy is just a royal jerk.  His whole scheme is to catch the creature and then surgically transform the thing into a land-dwelling horror, I guess.   The other scientists seem to think they're just out to catch a creature, I think.  Maybe poke and prod it, but I'm not sure they signed up for this whole "let's grotesquely experiment on a poor man-like amphibian" bit.

One fact I should add at this time is that I watched the movie after sharing something called Pumpkin Face Rum with Pal JuanD, so my recollection of the movie is a little hazy.

What I clearly recall is that Exeter is married to Leigh Snowden, who you might recall from Kiss Me Deadly, and not only is he controlling and emotionally abusive to his wife, he isn't terribly shy about making his scientist pals uncomfortable around the pair thanks to his jealousy.

After what is a curiously extended scuba-diving sequence, the scientists draw out The Creature and then lose him.  In a bit of night-boating, they draw him back out, then spear him, set him on fire and basically abuse him.  Then haul him in, and begin their experimenting.

For reasons I do not understand, Exeter decides to remove the gills (which have burnt off anyway), and the thing's hard outer skin falls away, which means they decide to get him some prison clothes.  And then put him behind bars.

Really, the movie makes no sense, Pumpkin Face Rum aside.  What it is interested in doing is exploring the terrible marriage of Dr. and Mrs. Barton and resolve the issue via Creature.  It's actually kind of a weird mix, and when you think of kids heading down to the Bijou to see a marriage on the rocks and some seriously unethical science...  I kind of tip my hat to the studio for putting this one out there.

Personally, I didn't love it, but it's still fun enough.  It certainly moves along at a decent clip, and it doesn't necessarily fall into a particular formula, I don't think.  But...  yeah, I dunno.

There aren't any real scares in the movie, and whomever decided that what we really needed was for the Creature to wind up looking like a convict was just making decisions I didn't follow.  Really, he kind of looks like a mid-90's Batman villain, so that's okay.

I dunno.  I can't really recommend this film, and it's maybe not a shock that there weren't a lot of Creature movies after this one.  I can, however, recommend Pumpkin Face Rum.  Maybe not my favorite, but it's all right.