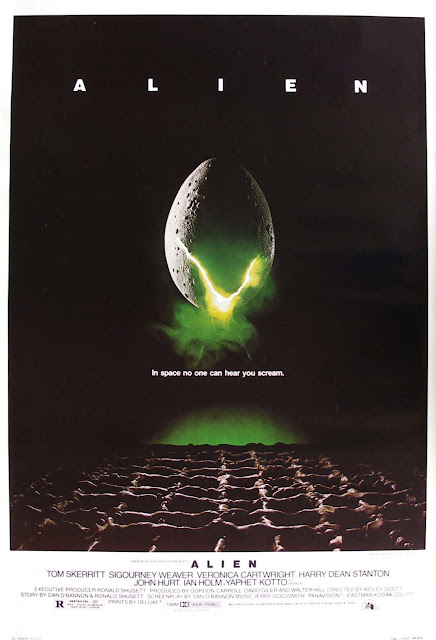 It had been some time since I'd seen Alien, and I had never seen it on the big screen.  The Alamo Drafthouse was doing double-bills of Alien and Aliens, and then Alien3 and Alien Resurrection.  I showed up for the double-bill, but I've been exhausted all week, and when SimonUK, my movie buddy, announced he'd seen the two movies on 4/26, I felt like I had an out.  So, we watched Alien, grabbed a pint at the bar after skipping out on movie #2, and then I went home for 40 winks.


I don't find Alien scary anymore.  Instead, I find it mesmerizing, and I stare at it in disbelief that it's so obvious what an impact this movie had on everything else that came afterward.  The impact of this movie looms so large, both horror and sci-fi are still figuring out how to do what Ridley Scott did in pacing and design.  And, in fact, it makes the heart-pounding pacing of Cameron's sequel seem derivative in comparison when you see how he took his cues from Scott.

But, my god, everyone involved with this movie... it's utterly an all-star production for movie nerds.  Tom Skerritt.  John Hurt.  Yaphet Koto!  Ian Holm!  Harry Dean Stanton!  and, Veronica Cartwright (who has done more TV than seems medically possible).   The movie launched Ridley Scott as a director into the echelon of A-list talent.  It had a script by Dan O'Bannon.  Design by H.R. Giger - fundamentally changing creature design and concept in movies forever.  Music by legendary film composer Jerry Goldsmith.

And, what can you say about Sigourney Weaver that hasn't been said?  Every year that passes, with every movie of hers I watch, I appreciate her a little more.  I expect she was about 29 when she made this film, and while she's clearly a young woman in the film, she shows up fully formed as a no-nonsense, iron-willed survivor, something Hollywood has happily found a place for in both dramas and comedies ever since.

Anyway, you've seen the movie, so no need to talk on it further.  Just very happy to have seen it on the big screen, with perfect sound and alongside a guy who loves this movie more than you could ever conceive.
Posted by The League at 4/30/2016 12:37:00 AM

Mesmerizing is a good way to put it. This film is something special. I really wanted to make the Alamo Drafthouse screening, but couldn't justify the expense plus missing yet another bedtime with the kids.

All the #alienday hubbub has made me gateway back into full fan mode though, gobbling up the films and supplemental materials for the last few days.

Have you read the Archie Godwin / Walt Simonson comic adaptation? It's somewhat different from the film, but equally brilliant.

I'm not sure I knew there WAS an Archie Goodwin adaptation. My earliest memory of any Aliens comics were the 1980's Dark Horse books (that couldn't seem to come out on anything like a regular basis at first). I just looked it up. Hmmm... I'm going to need to consider picking that up.