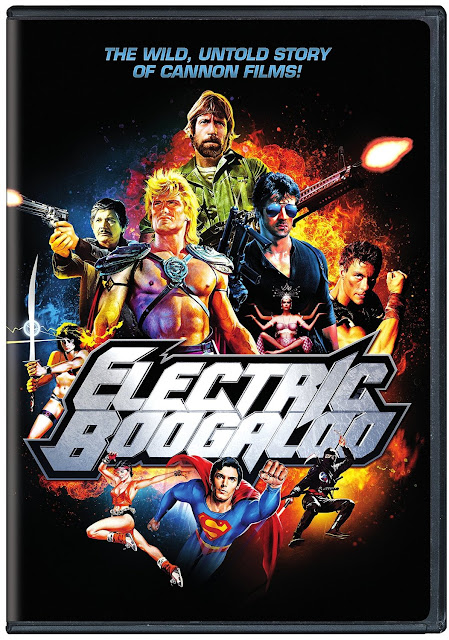 The doc follows a pair of Israeli cousins who came to the U.S. after cinematic success in their native land, never bothered to learn the rules of either the Hollywood game or a sound business model, and went to work making actors like Sybil Danning a home video actioner movie star, Chuck Norris a force to be reckoned with in Hollywood, and Tobe Hooper an endless string of opportunities.  The movie interviews dozens and dozens of actors and associated talents from the heyday of Cannon, from Bo Derek and Cassandra Peterson (apparently the villain in the second Allan Quartermain movie starring Richard Chamberlain - whom they also get) to the stars of American Ninja and Ninja 3: The Domination.  And plenty of folks who worked behind the scenes, up to and including the former head of MGM, who briefly distributed their movies, and who has nothing kind to say.

It's all pretty unbelievable.  They made so many movies you've seen.

What's kind of funny is that - as much as I wrote about how much influence Frank Miller had on comics of today - people, so did Cannon.  There's a direct line between the Charles Bronson Death Wish pictures and the Punisher and all the impact The Punisher had on comics for decades to come.  Certainly Cannon's insistence on Americanizing ninjas and putting them in every third movie for a while had an impact as well.

A lot of hay is made about what a bad reputation Cannon has in Hollywood, but out in the burbs in a pre-internet era, we were only barely aware of the concept of a prestige picture, and I was pretty late in high school before I started figuring out studios made particular kinds of pictures (and it really hit home in college when I realized "hey... every time I see a horror movie, it was made by Dimension..." and realized how specific it could really get).  For the rest of us, we were familiar with the logos in front of movies, but I don't think it meant much to us.  It's not like I processed the idea that Cannon made schlocky movies.  They made movies I wanted to see with cool names like Delta Force.

After having had just read the Disney biography a while back, it's kind of funny how that, too, was a story of outsiders coming to Hollywood, constantly scrapping with banks for money, betting it all on the next big dream, tons of pictures out but somehow always still in the red.  But nobody died at Cannon, the place just fell apart under its own weight.  It makes the survival of the bigger studios all that more remarkable and explains much about their risk-averse productions.

Anyway, if you're around my age, I highly recommend this doc, currently streaming on Netflix.  Get the kids out of the room, because they aren't shy with re-showing some of the nudity in those older films, and the language is about what you might remember from those movies - but, man, it's a fun ride to see what those guys were doing and trying to do.

I also recommend a doc that came out a few months prior: "Rewind This." As someone who came of age around (and spend over a decade working at) video stores, this and "Electric Bugaloo" gave some fascinating context to stuff I never expected anyone else to pay attention to.

I've been having an internal debate with myself as to whether we can rest the blame for the death of Superman movies on Cannon. I've finally decided that, if we can't outright blame it all on them, we should at least try.

Also, after watching this documentary, I just how many of these stinkers I still really enjoy watching. I distinctly remember being invited by the Steans family to pick out a movie to rent, and I, being a rabid ninja fan, picked out Ninja 3: The Domination. I also distinctly remember several members of the Steans family pointedly remarking just how terrible it was after about 15 minutes of run time, and they promptly removed it. I have recently taken the time to rewatch this classic, and I still really enjoy it. Funny how I can get a kick out of watching these films, but things like Jurassic World make me mad.

Oh, that was to save face in front of my parents. I totally watched that after they went to bed.

Watching a scene from Ninja 3: The Domination with my nephew at an Alamo Drafthouse pre-show recently, and my commentary that it was from one of the best bad movies ever made was what prompted him to ask for my "favorite bad movie."

Though I ultimately settled on Beastmaster, Cannon's own Masters of the Universe is a close runner-up. Either a coincidence, or revealing that I have a thing for blonde oiled-up guys in loin cloths with big swords. 😉

Trying to deconstruct by what we mean by "bad movie" is what keeps me from jumping immediately into this conversation. After all, despite an Academy Award nom and being inducted into AFI's 100 years 100 movies list, etc... there's always someone saying how "bad" Star Wars IV is, and with reason. And i never know if we're talking "well, this is a poorly executed movie" versus "everything about this movie is incompetent". And, are we talking about unironic enjoyment of the bad movie or "this is so bad, I am enjoying watching it"?

We'll need to sort this out, but I am sure we'll keep coming back to an oiled-up Mark Singer.

When I talk about bad movies that I love, I don’t mean that I enjoy mocking them or feeling ironically superior. I mean I genuinely enjoy watching them – while acknowledging they’re pretty rough around the edges. Because there’s something there, underneath the poor acting and the low budget or whatever other barriers there may be that manages to speak to my non-cynical child self.

I think loving a bad movie is a bit like loving a person. You acknowledge there are flaws there, maybe even huge ones, but that’s still part of what gives them that unique character. You love the whole person, not just the good parts.

I'll agree with Stuart - there are some bad movies that excel because of the heart behind them. You can tell they were made earnestly, and to me, that makes them much more engaging.

To totally derail this conversation, there is a truly prescient Star Wars squabble between Roger Ebert, Gene Siskel, and John Simon, discussing Empire Strikes back (here).

I can't help loving ineptly made movies, partially because you have to admire the fact that they put their head down and got on with it. I'll re-tell my Birdemic story some day.

But, I know what you mean. It's how I feel about a lot of this Cannon stuff, Commando, but also some more earnestly made but not perfect filmmaking of the mid-century to the 1980's. Hell, I've never giggled at the bats in Dracula. I take "Forbidden Planet", "20,000 Leagues Under the Sea" and "War of the Worlds" (1953) as the big blockbusters they were. But, yeah, it's not like I haven't watched and enjoyed stuff that got some pretty terrible reviews (I will always leap to the defense of "John Carter", for example).

If you guys haven't watched the clip Matt linked to - do so. It's absolutely terrific. I have always been puzzled by people who loved movies but projected their own confusion onto the masses when any element of fantasy was involved. Just wait to hear what he thinks you should take a kid to see. This guy is a barrel of monkeys.

John Simon's comments (beside the suggestion of what to take a kid to - he has no concept of children) made me wonder if he was talking about the Transformers franchise, which made me further wonder if I, too, had become old and crotchety.

Well, you can acknowledge something is both bad, but understand "it'll hold some appeal for the kids". It's why I've gritted my teeth and been well aware that BvS will make a billion before all is said and done - because it can be terrible, but scientifically calculated to sell tickets to 15-26 year olds. Transformers is toothless and friendly enough to kids. But, let's be honest - it's joyless, too. Compare it to Jungle Book, another CGI fest. But, yeah, I know what you mean.