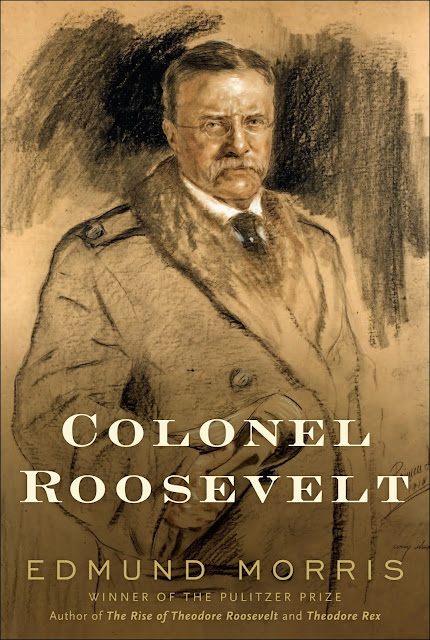 The book opens upon Roosevelt astride the engine of a locomotive, heading across the Serengeti, rifle in hand.  Upon leaving office, the now former President headed to Africa where he spent a year keeping out of politics, taking up a mission to stock museums with specimens, and went on safari in Eastern Africa.  That's right.  A year.

Departing Africa, he met up with his wife Edith and made a grand tour of Europe, meeting kings, kaisers, and popes.   And what he saw, while peaceful at the moment, told him of a great and inevitable conflict.

His return home saw him greeted by untold numbers of well-wishers in New York, a grand return to an America that had missed him.

All of this is prelude to what would come.  The sense of betrayal at Taft's direction in the White House, the lead up to the 1912 election, the building, failure and bolting of the Progressive faction of the GOP.  Then, the ill-fated trip to Brazil and the treacherous journey down The River of Doubt, and a return to the US and the lead up to World War I.  And, of course, the fate of the Roosevelts during the war and afterwards.

I hesitate to recount the events of the book in detail.  After all, this is history.  You can look it up.  It's online somewhere.

One of my most recent Roosevelt reads was The Bully Pulpit by Doris Kearns Goodwin, which takes stock of Roosevelt and Taft's intermingled fates.  While author Edmund Morris is as even handed as can be and doesn't go in for much in the way of psycho-historiography, his take upon the events of Roosevelt's later years is, perhaps, more generous than Goodwin's, who felt far more sympathy for Taft than Morris' presentation.  But it's also fair to say that Morris is more inclined to be reporting Roosevelt's perspective upon situations and facts, not able to give a fair accounting to Taft in the "on one hand, but on the other" manner that Roosevelt himself was likely to do in his speech-making.

I have not read much (read: anything) in the way of primary sources on Roosevelt.  I'm likely to begin reading some of his papers soon, I think.  But after having read several biographies of the man, I find it a bit surprising how even a historian as steeped in Roosevelt's life and psychology, finds Roosevelt's seemingly split tendencies to fight for Progressive values as well as find in the man a decidedly bellicose spirit.  At the core of it seems to be an idealism, a readiness to take on challenges that thwart home and hearth from his perspective, and that you can love peace while being a realist about the situation of others and recognizing their aims are far different from your own.

The book provides some of the finest detail I've read to date upon the rise and eventual necessity of the Bull Moose/ Progressive Party split in 1912, a necessary surgery, perhaps, to save the victim (and something we should be watching for in both parties this election cycle).  Further, it provided the single best explanation to my ears of the why's and wherefore's of the events that led to World War I, something every history and article I've read previously failed to provide a sufficient explanation.

It's difficult to believe or keep pace with the scope of Roosevelt's life and innumerable achievements.  And even in this period from 1909 through 1919, he was still helping to reshape the world, writing dozens of books, articles, columns, exploring uncharted rivers, hunting rhinos and elephants and lions, raising grandchildren, widening his scope and growing a greater appreciation of all sorts of Americans.  He was for women's suffrage, stood on stage with Jane Adams, dined with kings, took part in Native American snake rituals, started a new political party, had a river named after him.  And all this after careers as NY State Assemblyman, rancher, Police Commissioner of NYC, Governor of New York, Assistant Secretary of the Navy, Colonel of the Rough Riders, Vice President and President.  Peace maker.  Canal builder.  Conservator.  Naturalist.  Historian.  Political commentator.  And I'm sure I'm missing a dozen more titles.

Even in fever, near death during his Amazon adventure, Roosevelt was murmuring Coleridge.

Who among us, let alone a presidential candidate in 2016, looks a bit like this person?

Morris allows history to vindicate Roosevelt's unpopular "preparedness" stance prior to America's eventual and foreseeable entrance into World War I.  Perhaps it was Roosevelt alone who - having watched a German Army run maneuvers alongside the Kaiser - held a unique perspective to know what was at stake if the U.S. did not enter the war, and that could be saved if they did so more quickly.  But that call for the U.S. to enter a war an ocean away and someone else's problem to America, was seen as the ravings of a lone voice in the wilderness. But that bellicosity - not really a virtue of Progressivism - while perhaps overly enthusiastic, seems prescient, in retrospect.

The book also manages to build a portrait of Quentin Roosevelt, the only one of the four Roosevelt sons sent to war who was killed in action (though all saw it and two more were injured) allowing for his death to be both meaningful and place TR's final years in context.  And, really, to put a face on the death of Americans in a war now a century in the past.

All of the immediate Roosevelt family receive treatment enough so you get a feel for who they were, how they fit in with the family, and that Oyster Bay was a place they could hardly avoid even if they wanted to.

Of most surprise to me was the recounting of Roosevelt's failing health in his final years.  Most often this is barely mentioned or glossed over.  But, indeed, the ill health he'd so famously fought his way away from in childhood, seemed to catch up with him in his final years, the weight of loss and abuse of a rugged man who had taken a bullet, suffered Cuban fever and malaria... all that eventually caught up with a vengeance, taking him in his sleep, just over the age of 60.

Of course, yes, I recommend the book.  Or, really, all three of Morris' books on Roosevelt.  As always, reading about Roosevelt provides a lens through which to understand the transformation of America from the 19th to the 20th centuries.  Whether you agree with his points of view or not, or Morris' perspective upon both the events and views, it's essential reading.

I read this as an audiobook, read by Mark Deakins, who managed to provide one of the most dynamic readings of a biography I've heard to date.  He infused Roosevelt with a genuine character, as well as all of the voices he was asked to provide, including letters and quotes from French aristocrats and children.  It was an astounding one-man show.
Posted by The League at 4/26/2016 11:50:00 PM

Well, I'm convinced. Excellent review. I'll have to sneak this in between my Pacific War readings.

I've told myself I'd do a Wilson bio and this damn Hamilton book by Chernow, but I will swing back by at some point to get a good starting point from you to find out where to start on Pacific War books.