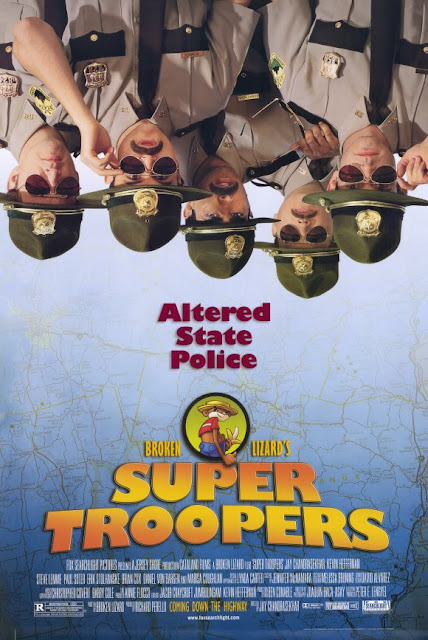 It's been years since I watched Super Troopers (2001).

Thanks to my incessant theater-going between 1994-2002, I caught this one during it's theatrical release and was able to say "I saw this before it became a hit via home video and cable".  Thus, my hipster credential or whatever.

Going back is never easy.  The comedies I enjoyed from my teens through my early twenties reflect much more of the sense of humor of a young man who can happily sit through, say, one of Adam Sandler's earlier works.  Which I did.  Heck, in my teens, I saw a Pauly Shore movie in the theater.   This is sacrilege for a 90's Austinite, but I find Dazed and Confused nigh unwatchable these days.

Super Troopers 2001 was the brainchild of and investment in comedy troupe Broken Lizard, and was marketed as such, which was weird, because I don't think anyone had ever heard of Broken Lizard in most major markets.  They hadn't had a show on MTV or Comedy Central or anything that I recall.

The movie uses the set-up of making the Broken Lizard guys highway patrol officers in upstate Vermont, not known for having a whole bevy of issues, and so the cops spend their days entertaining  themselves with comedy sketches along the roadway and trading insults with city cops from the local small town.  Really, especially in the first 45 minutes of the movie, that's where the movie works best and is genuinely funny (to me, anyway).  And that's the part everyone remembers.


Part of what I found so funny about the movie was, yes, of course the now famous "meow" bit, but also that while they insulted the local cops and whatnot, the wrote their own characters as dysfunctional - they weren't just pointing at other characters and laughing.  And, of course, they cast Brian Cox as their boss enjoying his cushy gig running a highway patrol unit that no one is watching all that closely, and retirement is imminent.

There's a two pronged plot about the threat of budget cuts and the highway unit getting shut down and a mysterious marijuana trafficking operation that - if they solve it - they might get their budget reinstated.  And, of course, Lynda Carter appears in, like, two shots as the Governor of Vermont.

The movie still basically works when it does, and in a few places you'll find yourself just cringing, but that's what happens when you take chances, I guess.  Probably the most cringe-worthy bit - and there was so, so much of this in the 90's - is the thankless role of "the girl" who smiles along at the shenanigans of our wacky group and who acts as a love interest/ plot device and never seems quite in on the joke even though her dialog says otherwise.  Broken Lizard has a certain boy's club mentality, and I'm not going to say there's a time and a place for that, but here it just feels like a missed opportunity from time to time.

But as far as a "it's Friday at 7:30, I don't want to deal with anything that makes my brain function" movie, it worked well enough.

The movie also features actor Jeffrey Arend in a part that will make you say "This.  This is the guy Christina Hendricks is married to.  Life is funny."  The good news is - for not being one of the troupe, he's one of the funniest bits in the film.  Never underestimate the power of making a woman laugh, I guess.

I did see the follow up movie, Club Dread, which I mostly remember as being unfunny and wanting it to end, but have not seen any other Broken Lizard films since.

In 2015, Broken Lizard ran an Indie-Go-Go campaign to get a Super Troopers 2 made, but despite the pleas of a co-worker or two, I did not send in money.  Looking at the Broken Lizard site, the Indie Go Go site and doing a quick Google search all makes it hard to figure out exactly what the state of the project is at this point.  It doesn't seem to have shot yet, and it seems that maybe they raised the money with no script in hand, which... well, I'm not a film making professional.  There are lots of jokes on their various sites about how they haven't just run off with the millions raised, but it also doesn't seem anyone has actually shot any film yet and that 2016 date for the movie on IMDB seems more... aspirational than realistic as we head into August.

Doesn't mean a funny, fine movie isn't coming, but it's always interesting to see how these things pan out.