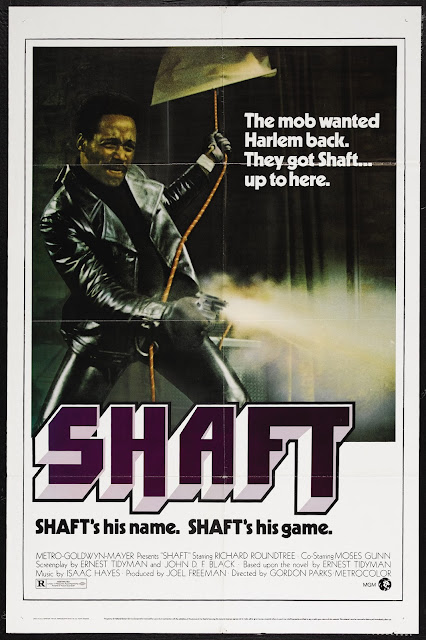 In the 1990's, for reasons that involve a lot of co-option of black culture by suburban white kids, and waffling between irony, genuine appreciation and I think a sincere love for the score - young white America somehow became invested in the 1971 film that was considered one of the best films to come out of the blaxploitation movement, Shaft.

Context free, a lot of us cracker kids watched I'm Gonna Git You, Sucka on VHS or HBO, maybe understanding that this was riffing on movies of a prior era, but I hadn't seen them, nor had my peers.  I think the closest I got to taking in any blaxploitation film until the early 90's was tuning into Super Fly one night as a kid in middle school, believing from the title that it was a superhero movie I'd somehow missed.  If anything, I got a clue as to what the spoof movie had been on about via reruns of TV shows that lifted from blaxploitation, but I confess to being mostly ignorant of the genre until maybe 1992 or when I got to college.

Kids hipper to a wider variety of music than what I listened to picked up pop-culture references as 80's and 90's hip-hop name-dropped and sampled from 70's actioners and that bled over to other genres of dance music.  The curious kids picked up some of those movies to rent and saw a lot of stuff I didn't catch until others got me to take a look or I heard about it word of mouth (the internet was just Star Trek fan pages and lo-fi porn then, you see).  Other kids who had gotten into soul and funk music tracked down Isaac Hayes and wanted to actually see Shaft.  I do know that by the time I left high school, I was at least aware of who Hayes was, but that was about it.  Had maybe heard of Shaft, but this was also an era in which your local Blockbuster likely didn't carry movies that were older than 7 or 8 years from the theater.

As a good, sorta-hip white kid of the 1990's, I caught Shaft at some point during film school.  I don't remember if it was before or after a unit on blaxploitation as a genre and my first exposure to Pam Grier (something a young man never forgets).

The funny thing is - watching it this last weekend, I didn't really remember Shaft all that well.  Once the one guy gets tossed out the window, I couldn't really piece together what the plot had been, just snippets here and there.  So, I was pleasantly surprised to find out - Shaft is actually a strong private detective story in a classic pulp-crime style (deeply appealing to this viewer), with a fascinating protagonist who is literally not playing by anyone else's rules - if'n you should ever want to see what that actually looks like, you with your anti-heroes.

And, of course, Shaft is a Black superhero who cuts through white culture through the sheer power of not giving a good goddamn.

It's far from a perfect movie.  It has some poor production quality and sound mixing issues.  Some of the acting is a little hinky, and you wonder if, sometimes, they shouldn't have gone in for another take to smooth out a scene here or there.

But as a capsule of so, so much that was going on in the 1970's in the U.S. and for a look at New York during a window of urban decline, it's an absolutely stunning bit of film.  And, of course, you know the soundtrack is one of the best albums of the 20th Century.

The plot is straight noir detective stuff overlaid with an aggressively non-white perspective, a peek into a  parallel society in Harlem that the cops know they're helpless to penetrate or understand, and hoping folks with the brains and decent moral compass like John Shaft will throw them a bone here or there.  Philip Marlowe and Shaft may share a disdain and distrust of cops and know who they're dealing with instinctively, but at the end of the day Marlowe is still a wise-acre white guy, and John Shaft is a guy walking between two worlds, not always effortlessly.

John Shaft is a private dick (who's the sex machine to all the chicks) who is approached by two heavies from a Harlem high-powered gangster.  They lean on him, and one ends up going out a window.  But in the fallout, the gangster comes to Shaft hat-in-hand to ask for his services to find his missing daughter, and money is no object.

Soon, Shaft is hitting the streets, tracking down his one lead - a possible connection to a Black Nationalist group and eventually the Italian mob.

I don't want to oversell the movie.  It's a bit rough in the way of indie movies and grindhouse movies of the era.  I won't try to sell you on Richard Roundtree as the next Olivier even if he does have a certain presence that I think you can latch onto.  And Roundtree isn't necessarily alone in seeming a bit stilted in front of the camera.

But I was surprised by how well the plot hangs together (the movie is based on a novel by Ernest Tidyman).  I love the shot-on-location feel in New York during a particular era (I'm also a fan of Taking of Pelham 1-2-3), and the no-bullshit technique employed by Shaft.

And, of course, the movie is a fantastic bit of culture of the 1970's, reflecting the voices of black talent making a film that speaks to their own visions of what could be.  Shaft is uniquely aggressive with - well, everyone.  But he takes no guff from white cops, he stands up for himself and he's got a better idea of the situation than anyone else in the room at any given time.   The presence of Black nationalist movements, issues in urban crime and the acknowledgment of racism and a lack of trust as part of the world and an undercurrent in the story is all interesting stuff from then and how it reflects on now.

Yeah, today a lot of the dialog feels a bit hokey and, well, the 70's are now as dated as a movie from the 30's.  But I basically did really like it, and when you add in the music of Isaac Hayes (the theme did win Best Song at the 1972 Academy Awards and is in the National Recording Registry at the Library of Congress), you have a pretty damn complete package, I think.
Posted by The League at 8/02/2016 11:28:00 PM