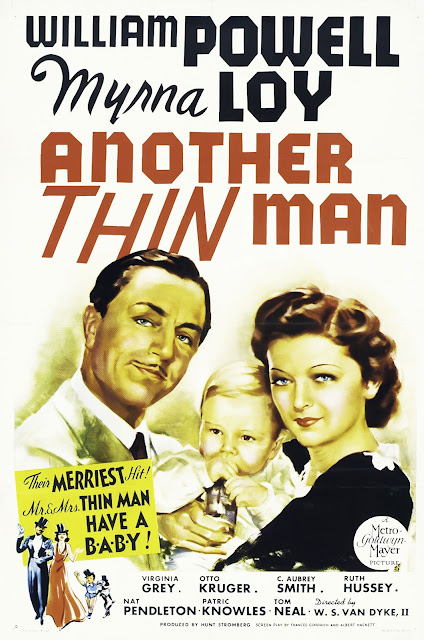 After two great movies in a row, the third installment of the Thin Man series, Another Thin Man (1939) feels like a project that just didn't gel as well as it could have.

I recently completed reading The Return of the Thin Man, which is less a book and more the lost story-treatments and scripts that Dashiell Hammett worked on during his tenure in Hollywood and some editorial/ historical notes about what was going on with Hammett in relation to the work.  Frankly, you're probably better off just watching the two movies it covers - After the Thin Man and Another Thin Man, but completionists will find the book worth checking out.

The gist of the notes about this third movie indicate that not only was Hammett sort of done with Nick and Nora before he even started work on the movie, the credited screenwriters, Frances Goodrich and Albert Hackett - who had worked with Hammett on the two prior films - were also ready to call it a day.

All in all, the film does work.  Let's not call it a troubled film.  But the alchemy that caught everyone's attention in the original that semi-carried over to the sequel, is fizzling a smidge by this installment.

There's a lot that works well in the movie, and things that work that shouldn't.  Myrna Loy is on fire in some scenes such as the Cuban night club, her police interrogation and a few others.  The inclusion of Nick Charles Jr. is minimized and undistracting - our two favorite sleuthing lushes still get to enjoy a soda water or twelve.

I'll suggest that there's something oddly contrived about the events of Another Thin Man that, for all the winding plotting of the two prior films, somehow felt plausible.  And I'm talking about at least one movie where they made Jimmy Stewart out to be a heartless killer.  More to the point, it's hard to care about either the victim or the bereaved.  It's not even that the characters aren't sympathetic - they really aren't in the two other movies, either.  But these characters just sort of land with a thud.  Maybe interesting chemistry for a short story or novel, but in this context, they just don't come to life.

I really do like some scenes, and wish some scenes had been more fully developed (example: it seems like 'the baby party' had more room to breathe than what they gave it).  Powell and Loy are both back in fine form, and even the addition of a baby just seems like more fodder for the mill.  They may have a baby, but, you know, they're not going to let that slow them down.

According to the book, this was more or less Hammett's last hurrah with the characters.  Always in frail health, when he finished the work for the studio, he had a collapse.  He was tired of them and sold them outright to the studio, and it's no small miracle we didn't get that Johnny Depp remake that was rumored about four or five years ago (I'm not actually averse to a remake.  It's been 80 years.  But I do not envy whomever decides they're going to take on the roles of Nick & Nora).

I don't want to bag on this movie too much, because it's a really solid comedy/ mystery.  As you can imagine, it's just tough not being that first movie, or even the second when it felt like Hammett's mystery chops were in top form.  It just slips a bit here.  Example:  I never did figure out why DumDum was just laying in the road at the beginning of the movie.  It feels like a mistake, but I know from reading that book that was more or less what Hammett intended.

Anyway, still well worth checking out if you're considering blitzing through the Thin Man movies.