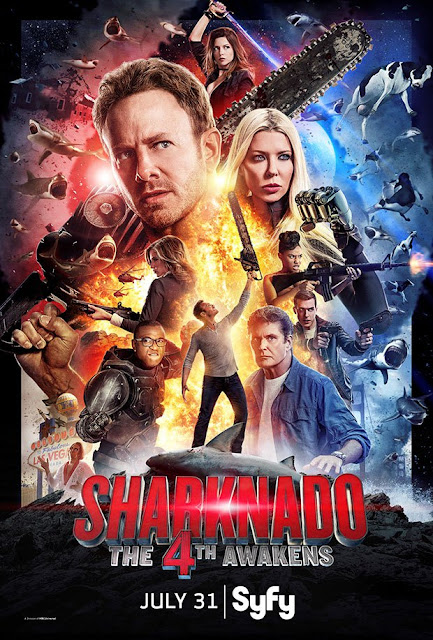 
Former 90210 star Ian Ziering, just off a run as a Chippendale's star performer and an occasional voice actor, was an unlikely star for the movie.  He has a tremendous voice and good presence, but he was type-cast as Steve Sanders and I don't think America really wanted to see him as anything else (a similar problem has followed the rest of that same crew).  The movie paired him with walking cautionary tale Tara Reid as his ex-wife.  Reid, herself, was supposed to be a big deal in Hollywood until she decided drinking (and, we'll assume, other substances) and letting the E! Network foot the bill as she traveled from exotic locale to sunny beach, in a bikini and drunk, were preferable to building a lasting career.  And people kinda turned on her.*

Soon, there was a sequel (this one in NYC rather than LA).  Then the third one that was kinda crazy, took place partially in the White House and partially at a theme park, and wound up in space.  No kidding!  The first one seemed aware it was stupid and just kept upping the ante, but it also felt like they felt like it didn't matter - no one was watching.  But with the movie a phenomenon (pushed along by, oddly enough, people like Mia Farrow tweeting about the film as it unspooled), they were well aware people would be watching the second installment and then the third.  And, man, did they go to crazy town.

Casting became it's own stunt.  Actors and models and "personalities" got mixed in, so you might see anyone show up from Bo Derek (who looks fantastic), to Franky Muniz to Ne Yo.  You just didn't ever really know.  Heck, we got The Hoff as Finn Shepard's dad.  Then everyone winds up in space.

So, where to go with this one?  Well, you mutate the Sharknados.


It's literally impossible to say if this movie is good or bad or good at being bad.  It's a moment-by-moment experience of "huh.  Well.  Hey.  Who is that?  ha!  What?  Huh."  Ad infinitum.

Where else will you see Robo-Tara Reid?  Nuclear tornadoes filled with sharks?  Dog the Bounty Hunter and cast members from The Texas Chainsaw Massacre 2?  Plus, homages to the cover of Action Comics #1, the Wizard of Oz, Star Wars and Tommy Davidson as Elon Musk?  Chainsaws, explosives, pirate ships, and jet packs?  What other movie series would cast Al Roker as himself as a recurring character?

Go ahead and scoff, but there's something in this movie for everyone, including bit parts for family members of the cast.  Who's that girl in the sport coat trying not to look at the camera?  She's The Hoff's daughter!  That lady looks familiar - oh my god it's that actress you haven't seen since Baywatch in 1994.

Want to see the Grand Canyon blown up?  IT HAPPENS IN THIS MOVIE!

No, this one wasn't quite as mind-boggling as parts 1 or 3.  It looks that the odd-numbered installments will be where we get the real juice for these movies.

Oddly, the movies are all about how awesome it is to be with your family, even if your grandfather is Gary Busey.

Whatever.  It's two hours once a year, and I can make time for that.


*I decided to Google Reid and it seems she's currently on some deep-cable reality show about marriage/ relationship counseling or something, and she's going bonkers all over the show.  My primary concern for Reid these days is that she's not well and needs rehab, but that seems like an increasingly remote possibility

I will say with full confidence that Sharknado 4 is a more competent film with a more realized vision than Suicide Squad.