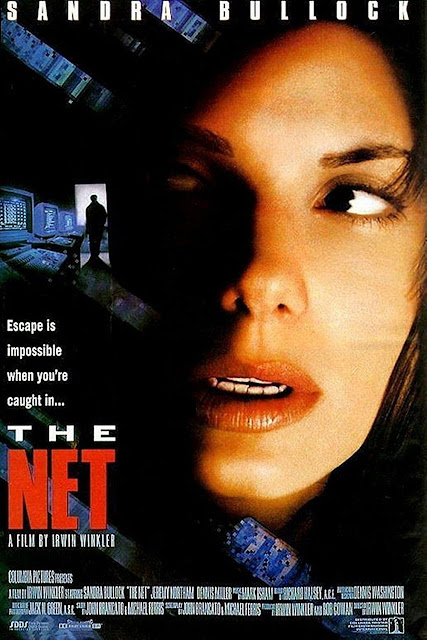 
In some ways, the movie was really well conceived in many parts.  The ordering of a pizza online, booking your own travel arrangements - that was science fiction for the most part, but it was coming.  Shouting your order to a pizza-shop employee in a loud restaurant and getting an order that was wrong but which made sense if you figured out the error phonetically was just part of modern life before Dominos.com.  The only people with computerized access to booking airfare were travel agents, and that's why you paid them.**

But because John and Jane Q. Public likely didn't even own a personal computer, the movie moves slowly, explaining to the that there are computers, and in computers there are viruses.  And in the viruses, there are bad things that happen to computers.  Also - there is an internet, and people talk to each other on the internet - people who might be otherwise isolated.  Also, you can order a pizza.

I mean, this is how we got people used to an OS change in that same, magical year.

Unfortunately, just getting the plot going takes literally 45 minutes of what winds up being an almost two hour movie.

Sandra Bullock is maybe oddly cast as a loner who is vulnerable to someone coming along and swiping her life (I mean, she's Sandra Bullock.  She's pretty peppy.), but she does well enough and has enough back-story to make you buy that - okay, this gorgeous, peppy woman is at least anti-social-ish and maybe a workaholic.

Unfortunately, the scheme the bad-guys are running never really makes a lot of sense.  They're a super-high-end cyber-security company used by, like, power grids and the Pentagon, but their plan seems to be to get installed and then fail at cyber security with a terribly obvious pointer along the way to tell people "oh, if you see that icon, that means this is evil software".

It's also evil software that, when clicked to launch, will show you incriminating files without even having to go to the file folders or structure.  It just shows you PDFs you did not ask for with upsetting data.

Because Sandra Bullock sees one of these and is a pretty good Systems Analyst (the best in the biz, we're told), she could probably piece it together, which means the bad guys pull a wildly complicated ruse which could have been more easily settled by drowning her in a pool in Mexico - but that would be a short movie.

Instead, we're treated to the bad guys just really, really annoying her by erasing her identity out from under her - something not helped by her anti-social/ hermit-ish tendencies.

I expected the technical set-up in the first half to be much worse than it was, but it makes up for working okay in the beginning by making no sense whatsoever by the third act.  By then, they actually ignore how convention centers manage conferences and show floors (where is your BADGE, SANDY?)

I did not like it, Sam I Am.  It was two hours of my life I've lost so I could get more internet jokes, I guess.  But I'm not sure it was worth it.  It was, in it's way, better than Hackers, which was sort of like a Mountain Dew ad trying to capture a fragment of the zeitgeist and totally missing it.  At least The Net felt like it took place in a reality roughly reflecting our own.

But I do not get why people think firesystems in the 1990's were tied to web-pages, exactly.

The DVD I watched was from 2006-ish as a direct-to-video sequel was underway.  So if you like to watch movies with people talking at computer screens and no concept of what it looks like when you experience data loss, this is the movie for you!


*In 1998 I went on a family vacation for Spring Break just before I finished college.  In a conversation for which I still have not forgiven anyone in my family, I was explaining that I was working in a "multimedia office" that made web-pages and content for the internet for UT's College of Engineering.  They informed me that I was wrong, that I couldn't possibly be working on "the real internet".  And when I assured them, no, it's mostly all the same internet, I was informed by all of them - nope, I was mistaken.

I tried to figure out what, exactly, they thought we were doing, because it was beginning to sound like my family all thought we were being paid to make fake websites, like make-work or something, but they couldn't quite articulate their incredulity that just anyone could make a website and put it online.

I walked out of the room and just went to bed and figured I'd let history sort it out.

At the time it was very, very hard to explain that this wasn't like television, which had huge walls and very specific gate-keepers.  My family sort of assumed what we were doing was like public access television, but even at that - it didn't mean Public Access wasn't on the cable dial.  I'm not sure any of them remember this conversation, but now seems like a good time to bring it up again, nearly 20 years later.

**Circa 1997 I worked with a young woman who was paying good money to go to travel agent school, and everyone else at the Camelot Records would speak in hushed tones about how her industry was sure to disappear in three years thanks to the recently arrived airline websites.
Posted by The League at 9/17/2016 12:50:00 AM

What compelled you to watch this movie? Was it on cable or something?

Oh, and you didn't mention the short-lived TV show based on the movie

Jamie and I were at the video store and I knew I was about to rent something she wouldn't care about, and she waved it in my face as a joke, and I was like "oh, yeah, sure! Why not?" I mean, we just watched "Hackers" for the first time.