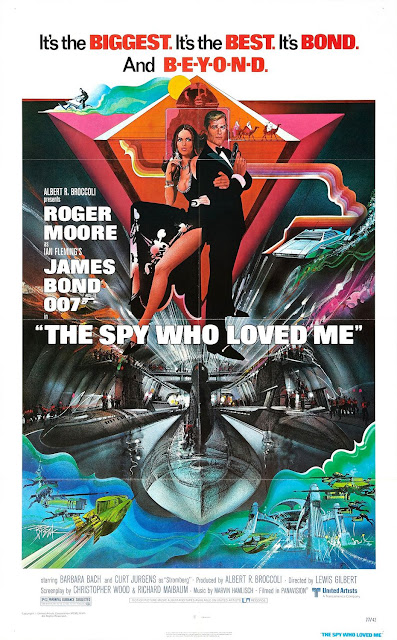 The villain's plot may not exactly make rational sense, but the parts of the plot totally work, and the villain's hardware, lair, etc... are all fantastic (obviously the submarine layer of our villain was ripped off by Super Friends for the Legion of Doom HQ).  The movie introduces Bond-fan-favorite-villain "Jaws", has that submersible Lotus (spoilers), and if you don't like Barbara Bach as Anya Amasova, you're dismissing one of the best Bond Girls until he circle back to Eva Green as Vesper.  She's a rare force to be reckoned with bearing a XX chromosome in a Bond film (and the title of "Agent Triple-X".  Because: Bond).

Also, the movie briefly features Caroline Munro, and that is never a bad thing.*

Really, I have zero complaints about this movie that aren't just Bond-issues in general.  It's ideal Bond with great gadgets from both villains and our heroes.  The scale of the thing is massive,with tremendous sets and props like the inside of a tricked out ocean vessel, submarines, three different nations worth of sailors fighting villains in red jump suits, nuclear missiles, and underwater villains using cool equipment.

Plus, we get to see Switzerland, Egypt, Sardinia, and...  yeah, I'm sure there was somewhere else.  Certainly England and fake-Russia.

I looked it up, and it seems the budget doubled between Man with the Golden Gun and this movie, and it shows on screen.  This is Bond as blockbuster spectacle, not just trustworthy spy movie, and it's a point the movies go to and retreat from over time.  The next movie is Moonraker, another Bond spectacle (but nowhere as good as For Your Eyes Only, which reigns it back in, in many ways).

*note to self:  we are watching Dracula AD 1972 this year for Halloween and just Starcrash in general.

I would still put For Your Eyes Only at the top of Roger Moore's resume, mainly because I like the more restrained approach than the Barnum and Bailey's Bond, but The Spy Who Loved Me is well done camp. Between the pre-title sequence, the theme song, the Lotus-helicopter chase and JAWS, this movie really does have it all. I didn't love Barbara Bach. She wasn't bad, just a little flat, but she had enough chemistry with Moore make it work. The movie might also have set a Bond film record (so a cinema record) for most double-entendres (Tell him to pull out!).

As far as Caroline Munro, I most associate her with Sinbad and the Eye of the Tiger.

Never heard of Starcrash. Wow, I just googled it. That looks nuts. You should definitely review that.

The hipster DVD rental place down near my house seems to have a copy of Starcrash. I will see what I can do.