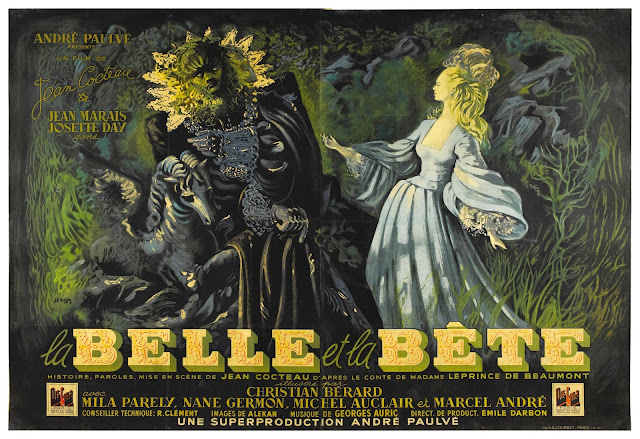 I believe it was in 1994 or 1995 that our own JAL suggested I was Jean Cocteau's cinematic fever dream Beauty and the Beast (1946), or, as it's French, La Belle et la Bete.  I don't know why it took me so long to finally watch it when I've probably watched National Lampoon's Christmas Vacation at least three times during the same interval, but there you go.

Most of my knowledge of the story of the fable of Beauty and the Beast comes from (a) the Disney film I've seen about a dozen times and (b) half-remembered snippets from a unit in my second grade class where Ms. Miles read us fairy tales.  But I don't know if I've read any official versions of the story since childhood, I just remembered the "Belle's dad gives Belle a raw deal, something about a magic mirror, and Beast getting very sick because Belle leaves to go back home for a bit".  And, of course, that he turns into a handsome prince.


I don't think I can actually spoil a story as baked into Western Culture as Beauty and the Beast, and certainly a good chunk of humanity knows the story thanks to the aforementioned Disney film and Broadway show.  And it does everyone a disservice if I just point out how this film is different from the Disney movie, because... who cares?

It's interesting to note that in the wake of expelling Germany from the borders of France, Jean Cocteau went back to work and put together a joyful fairytale, asking the audience to come along with him into a world of willing suspension of disbelief, of wicked sisters and magical mirrors and candelabras.  You can't blame him for wanting to create an escapist fantasy in a countryside ripped up by Panzers and infantry lines and where hope was a fire you kept hidden the previous six years.  The story doesn't speak to France's recent history, but it does speak to it's story-telling history and a return to a better time.

Most famous for it's look, Cocteau's vision one-ups yje magic in a Disney film like Snow White, wherein fantasy and reality merge seamlessly on the painted frame, and instead creates a fantastic world using almost all practical effects, make-up, expository dialog and expressionistic lighting in a real, tangible world.

Sconces of animated human hands hold candlesticks, the statuary watches with open eyes and earnest expressions.  Doors open on their own.  It's not hard to see why Disney decided they needed to go nuts with their concept if they were going to bring this story to life. 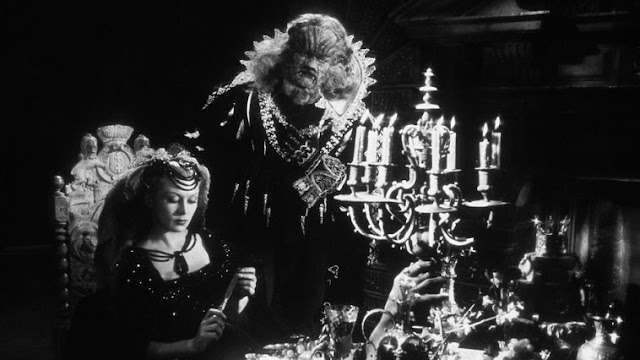 Cocteau's movie is on a smaller scale than I'd imagined it might be after building it up in my mind for the past two decades, but it's perhaps more satisfying as less of a gimmick of FX than a boldly executed realization of a fairy tale as solid narrative.  The story doesn't expand beyond the family affair version I first heard, a sort of insular bubble of filial piety taken to extremes.  Belle is the middle daughter of a household in bankruptcy, with her pure heart, has dedicated herself to supporting her father who - just after learning his financial fortunes have gone permanently south, finds himself in the castle of The Beast.  Of course there's an exchange and Belle takes his place.

Yes, some of the attitudes are dated, and I'm still not sure what to make of Jean Marais' casting as the scoundrel Avenant as well as The Beast - it feels like it inserts unnecessary confusion in the final minutes of the movie, but he is solidly different in all roles.

Beast in this film would fulfill the visions many-a-young man has about himself as awkward and outwardly a monster, but putting his best foot forward to impress a young lady, even as he know he repulses her.  Maybe in real life that's the impulse of the self-indulgent kid going through a thing, but here the concept has a pretty solid foundation, what with the hair and fangs and taste for hunting and eating Bambi.

I'm glad I finally caught the movie so I can understand the occasional references to the movie and check one off my "you haven't seen Movie X?" score card.  And, of course, it was actually an enjoyable film.  While it's family friendly - good luck getting your kids to watch a black and white movie with 1940's pacing and subtitles.
Posted by The League at 9/15/2016 01:19:00 PM