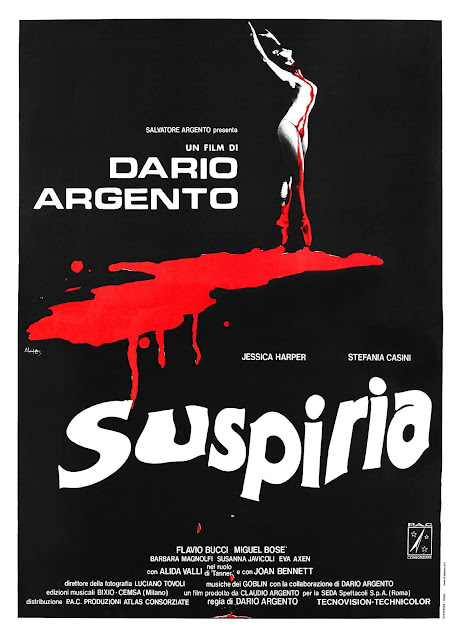 Suspiria (1977) is one of those movies that you see cited a whole lot for various reasons, usually around cinematography or as it exploited a trope of the horror genre that someone wants to discuss and class it up a bit.

For this reason, about a year ago I decided I wanted to see Suspiria, but as it wasn't on Netflix of available via Amazon Prime, my efforts were thwarted.  Luckily, Austin still has a movie rental company called Vulcan Video which recently moved it's South location to actual South Austin (Ben White, bitches!  Near both Blazer Tag and Jamie's dialysis clinic!).  I went and renewed my membership, discovering the last time I was in was July 20th, 2001.  Jamie believes we last rented "The Star Wars Holiday Special", which sounds about right.

When I've asked people if they've seen Suspiria, and they've answered in the affirmative, they usually also back it up with "it's interesting, but I'm not sure it's very good."  Which told me what I needed to know going into the film.

Anyway, point is - Suspiria was available.  I rented it  I watched it.

Look, I'm not much of a fan of the horror genre, so a lot of what Suspiria was up to was lost on me.  In general, it felt like 40 minutes of story stretched out over 140 minutes, but it's an immersive, disquieting visual and auditory ride over the entirety of that span of time.

A young American woman arrives in Germany to attend a prestigious academy for classical dance.  The night she arrives, she sees a young woman flee the school.  In the morning, she learns the girl was brutally murdered after running away.  Her integration into the school doesn't go particularly well when she has a fainting spell, and then maggots plague the entire dormitory floor.

She sort of suspects something is going on when another tragedy or two occur, and she seeks out some information which points her a bit in the right direction - but I don't want to reveal which things occur.

Because the movie was afraid it might lose us, it pauses in the back-half for a two-part, two-talking head expository sequence to explain what might be going on, just bringing the movie to a dead stop save some creative camerawork and a score by legendary electronic music pioneers, Goblin.

As far as Saturday-night sleep-over horror movies go, this one is kind of par-for-the-course when it comes to story and sub-par when it comes to most of the acting thanks to the classic "we're going to hire Italians who will phonetically deliver English lines and fix it in post with ADR" trick Italian filmmakers love.  But, as mentioned, it really is a beautifully shot movie - which is really why you're paying the ticket price to see the movie.

Light, color and shadow go a long way toward telling the story of the film, pushing ideas and anxieties forward in scenes otherwise devoid of energy and the camerawork of Luciano Tovoli carries a lot of weight toward creating drama and tension where the actors may not always carry the day.  Not to mention set design and the eerily envisioned dance school.  And Goblin's electronic exploration of the audio cues and nerve-bending tension.

The movie's most oddball star is Joan Bennett, 67 or so by the time she played the part of the school's head mistress.  Jessica Harper, our lead, is a sort of Karen Allen-type, with giant dark eyes set in a pale complexion, the sort of ideal look for someone haunted by the goings on at the school.

I don't want to undersell the movie, and it's definitely been replicated which waters down some of the impact, even as the film itself echoes bits of other supernatural films like Rosemary's Baby.  I can think of very few films that have gone as all-out in creating a recognizable-but-off-kilter environment as Suspiria.   All in all, maybe not my favorite film, but as I've been thinking a lot about exploring Italian and British Horror a bit more, maybe a good kick-off as we head toward the Halloween season.
Posted by The League at 9/16/2016 09:46:00 AM

I watched that movie with Jeff and Jackbart years ago. It was so spine-tingling that I fell asleep halfway through it.

or did you pass out from excitement? Yeah, it gets a little dull there for, oh, the middle hour of the movie.

Argento's reputation as a horror master is mystifying to me. His only movie I like is Phenomena. He can put together some amazing sequences (see: Opera), but his movies are a mess. Give me Fulci any day (though I don't much care for Zombie).

Well, Vulcan has a Fulci section, and I AM interested in seeing some good Italian horror, so let me know where to start!

House By the Cemetery and The Beyond are my favorites. The Psychic is pretty solid. He does have some clunkers, though.

The Living Dead at Manchester Morgue is pretty sweet. Tombs of the Blind Dead (the first of a trilogy, but I've only seen this one) is worth checking out. Just don't expect a lot of gore.

Not Italian, but if you want some pretty cool French horror, Jean Rollin's The Grapes of Death is pretty fun and The Iron Rose (also Rollin, not quite horror) is amazing.

You are on the precipice of a rabbit hole. Suspiria is def. the best known of the Argento films, but Deep Red and Tenebre are better stories. More murder-mystery than horror. A couple of titles on Amazon Prime are "Don't Torture a Duckling", "The Fifth Cord" and though I'm only about 15 minutes into it, the amazingly sleazily titled, "Strip Nude for your Killer".

Tombs of the Blind Dead is a total winner. I think it's on Prime, too.

I adore theese 70s Italian and Spanish films. I honestly don't know if any of these are "good", they all have something great and frankly, it's usually the broads.

As you can probably guess, I'm most excited about "Strip Nude for your Killer".

Jess Franco taught me not to get excited about a title. "Nightmares Come at Night" was a total bust. I was shocked!