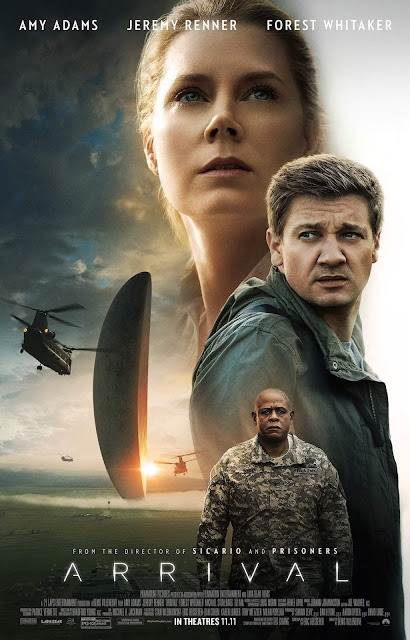 
In some ways, the movie is predictable, beat by beat.  In other ways, it's clever, but also does well what I believed Contact attempted and failed - making the cosmic personal.  We aren't in a disaster movie flashing back and forth between 30 different characters.  We're not all that concerned with what's happening at the White House or  with people out on the street - although it does feel as if the filmmakers knew exactly what that might look like in today's climate, and it feels very, very accurate.

Despite a budget in what had to have been in the mid-10's of millions, it's still a fairly intimate film, and doesn't confuse human connection with schmaltz.  Anchored by Amy Adams' linguist, Louise Banks, the film retains a central POV that grounds the sci-fi concepts in how Banks interacts with the visitors, the effect of their communication and through her point of view - how this changes everything.  And not by stating the changes in Star Trek-ian tones of discovery or the exposition we're familiar with as our heroes gain super powers - but through the eyes of this character (who is somewhat opaque but hardly a cipher).

I'm sincerely not wanting to give too much away, and, afraid I might, I'm going to cut it short.

But in a week in which divisiveness has been the defining factor of an election, which has gone on to spawn an historic and - in it's way- unprecedented splintering of a nation, I'll take a science fiction fable to remind me of the truths of the matter.  We cannot communicate if we don't try, if we can't understand what the words mean, how they're defined and the speaker's intention unless we grapple with our fear and extend a hand.  And we always have more to gain by not going it alone.
Posted by The League at 11/10/2016 10:23:00 PM

Wait, so this isn't that movie with Charlie Sheen about Aliens in South America who are causing global warming?

It's heavily implied all of that is going on off screen, although Charlie Sheen is never seen or mentioned and the movie takes place in Montana, I believe.