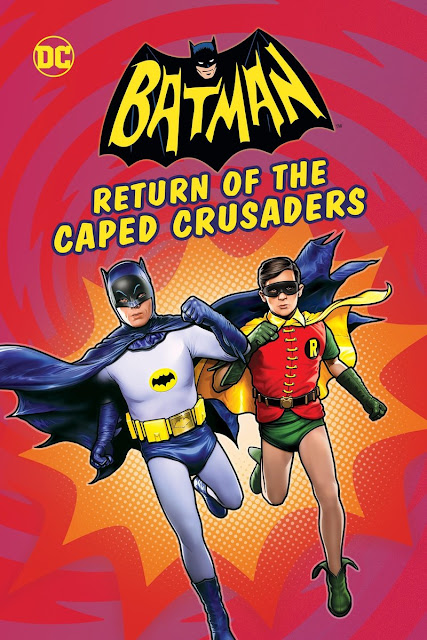 I'll be forever grateful that WB Animation took advantage of the fact that Adam West is still alive and well and acting at around age 88, and found a way to get him back in the cowl.  He and Burt ward return to their most famous roles (and Burt Ward still sounds weirdly like his old self, even as he's got to be in his late 60's or early 70's) as Batman and Robin, with Julie Newmar jumping in to give voice to Catwoman once again.

If you're a fan of the original live-action show or movie, it seems that the makers of this cartoon were avid fans as well, and the end result feels quite like the original TV series, but with none of the budgetary constraints of a live-action show.  It retains the camp earnestness of what went before, but with an extra vibe of self-awareness, winking at favorite bits like the dutch-angle fight scenes (knowingly goofy at the time - updated for fans) and all-too-well known reason why Aunt Harriet was added to the show.  The film is also aware of the many post 1960's incarnations of Batman, and isn't afraid to take them down a peg here and there (in one scene, my jaw was just about on the floor.  I'll let you guess which lines did it.).

There are innumerable references to prior episodes and guest stars, but there's also new stuff in here that will make old fans of the show cheer a bit as we see the Bat-universe get expanded in ways that are entirely logical to the show (a Bat-rocket!).


I mean, how can you not like seeing Batman and Robin solve another clue from the nefarious Riddler?

Yes, of course you'll miss the real Cesar Romero, Burgess Meredith and especially Frank Gorshin, but the voice actors who step in do a great job of trying to capture the spirit of those takes on the characters (although, oddly, the animators still were unable to catch Gorshin's mania).

The extras do get you some interviews with West, Ward and Newmar and they all seem delighted with the project.  And it certainly feels that way listening to them give voice to these characters again after all these years.

The movie is structured a bit oddly and it feels like maybe it's ready to be cut up into discrete chunks for a 3-episode release somewhere at some point, but that doesn't mean that the movie doesn't hang together as a whole.

Anyway, I'm so in the bag for this version of Batman that it's kind of hard for me to separate myself enough to be objective.  But it's also nice to have a family-friendly Batman you could show the kids tomorrow.

And, on a personal note, I like to think that in the multiverse of multiverses, this version of Batman will always be out there somehow.  It's nice to give Batman another visit at this late date.

*Well, if your kids are middle-schoolers and up, they will get a good number of the jokes.