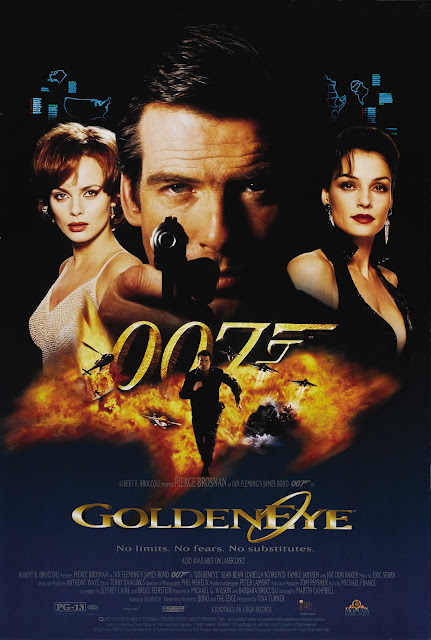 If the idea of ending the Timothy Dalton experiment was to shore up the Bond franchise again, one can certainly make an argument that it worked.  This was the Bond film that brought in Pierce Brosnan as Bond, got Martin Campbell in as a director, and more than anything else that would point toward what a modern Bond could be in tone - casting Dame Judy Dench as M.

I'm a little bit convinced that the rethinking that led to Casino Royale may well have come from what M reveals about Bond to his face in her brief appearance in the film.  In a movie of very good moments, for a wide variety of reasons, Dench's scenes are the most grounded and somehow still the most engaging, and it's also the best Brosnan himself is at any point in the movie - and he's rather good throughout.

GoldenEye arrived in 1995 as The Age of the Blockbuster took a leap forward, and Bond was no longer to be an option on the marquee.  Now, we all had to go see Brosnan, whom every American had pegged for the heir to the Bond throne from his first appearances on Remington Steele.

I'm not sure Brosnan was ever the perfect Bond everyone was looking for, but he's certainly got his own charisma.  You just sort of wish the film would let him have more scenes like the one with Judy Dench instead of whisking him along from what's a pretty solid start to an increasingly insane series of sequences.

The problem is:  for the most part, I actually like those sequences.  While not all of them are entirely fresh (the opening sequence tries to combine 3 or 4 prior Bond sequences into one amazing/ bullshit stunt) this is the Bond film with a thrilling tank chase through St. Petersburg that I thought worked better now than the first time I saw it in 1995.  That's a hell of a sequence.  It's got a Bond-villain layer that almost (almost!) makes sense at the end of the film.

But because it's also 1995, it features people using computers in ways that make absolutely zero sense and follow the rules of computers that were established in movies more like War Games than anything in reality.   At least Alan Cumming's sys admin is believeable as an egotistical, territorial knob who doesn't understand he's about to get sent to HR.

It also features Famke "Jean Grey" Janssen as Xenia Onatopp, a Russian ex fighter pilot with a curiously bent sexual drive and some very, very strong thigh muscles.  She is, of course, the female sidekick to our villain played by Sean Bean (so, yes, Sean Bean dies in another movie).

It's interesting to see the movie play out.  By this time I recall articles in my local paper on more than one occasion running fluff pieces about how someone asked a psychologist to comment on James Bond, and he "hated women, had sex with them because of aggression", etc...  All of which I am pretty sure you could absolutely make a case for.  From the first book, I don't think anyone was saying Bond was a study in mental or moral purity.  Still, the producers didn't want to rain anything more down on themselves, one assumes, so the days of Bond walking into a room, introducing himself and a woman dropping her robe (so many robes in these movies) was now in the past.

Unfortunately, if the 90's-era "hacking" of this movie wasn't the fatal flaw, it was that the movie forgot to build up to the romance of the movie, instead placing Bond and our Bond Girl, Russian systems admin Natalya Simonova (Izabella Scorupco), any chance to even talk before deciding "they are now in love".  It's super awkward when you realize, in this otherwise more-or-less sensible Bond movie that a woman he just met is trying to find out what they mean to each other the literal second their lives aren't in danger.

It feels more like a huge scripting error than any goofy ideas about romance - like Bond and Natalya were supposed to meet much earlier in the film and they left in the lines about "do I really mean nothing to you?" *kiss*

While it may be more grounded than many of the Connery Bond films, it still at least picks up some of what made Bond work in those movies, like an acknowledgement that maybe he's a cad and not the best guy.  Plus, he picks up the ordinance for the job.  It makes sense for Bond to have a machinegun rather than a pistol with 9 bullets when you waltz into a villainous layer.

While Onatopp may be the most over the top of all the villainous female sidekicks, Natalya manages to fall in a sweet spot as a character with an arc.  She's never helpless, she has a skill that makes sense in the course of the film, and as an actor - she's in no way annoying.  Maybe she doesn't have the charisma of other Bond girls, but you're not left thinking she's a drag on her own story that's playing out, and she has a few good moments.

We'll be shaking our heads mournfully in a few movies, but this one works very well for me, a few nitpicks aside.  The direction still holds up very well as its arguable Martin Campbell was what inspired a lot of modern action, from Bourne (obviously) to the more recent two Captain America films.

Today I think the videogame spinoff is more famous than the movie itself, but if you're looking for a "best of Bond" list, I'd add it in there.  I also truly think that Tina Turner's performance of the title song is one of the top 3 or four Bond themes.  Really, it's like - this, Skyfall, Goldfinger, For Your Eyes Only and Nobody Does It Better in my book.  We can debate this point.  Yes, I know View to a Kill is not on that list.  It probably should be, but it's not.
Posted by The League at 1/20/2017 12:49:00 AM

It's been mentioned on this blog before, but as the Early Guy with the Modem, my biggest memory of this film was the anticipation over IBM sponsoring it to get OS/2 into the film.

I kind of failed to talk about how the Brosnan era ushered in the sponsorship era, because it's frikkin' hilarious. Q talking loving about the new BMW, Perrier cans everywhere...

I do remember thinking it was odd they had an IBM store in Moscow.