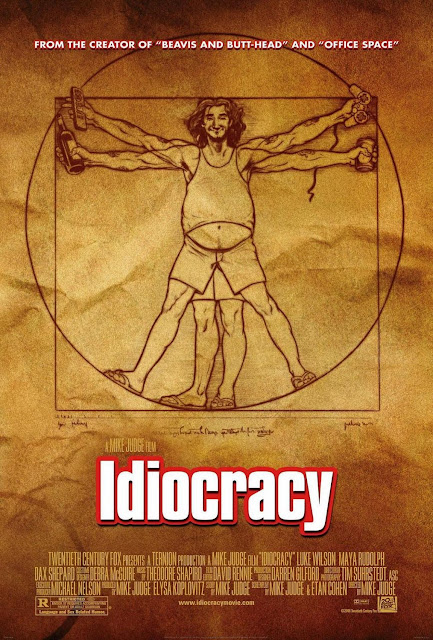 A lot of us folks on the left are a bit apoplectic about the way things have shaken out over the past six months or so.

We can agree to disagree on a great many things, and, hey, I live in Texas, so I know something about not necessarily being a fan of decisions going on in your government and still living peaceably and getting along with folks who don't agree with you on every detail.  But the new guy and his clowncar of billionaire oligarchs aren't really what a lot of us had in mind when we were sitting in civics class.

Feeling in a bit of a black mood about the whole state of affairs, and pondering a lot of the statements made by nigh-every Trump supporter we've seen interviewed, we decided to put on Idiocracy, the curiously prescient 2006 comedy by Mike Judge.


A lot of people took straight up offense at this movie when it came out, and I, frankly, couldn't believe the opening's explanation of how things wound up changing (I mean, we've all sort of had our secret doubts, but it's kind of weird to see it said out loud in a movie).  Yes, yes, snobbish elitism.  Whatever.  Snobbish elitists need movies, too.  It can't all be Paul Blart movies.


It does not get any kinder.

If the movie was taken poorly, it's because it actually kind of hit a part of the American populace that isn't used to seeing itself be made fun of, not really.  At least not in a way that doesn't harken back to Hee-Haw, or done in a soft way that could be dismissed.  Movie marketers and networks don't usually want to offend as they are a fairly sizable part of the buying audience in the US.

But, man, does Joe's discussion with the cabinet about putting water on plants instead of Brawndo sound a hell of a lot like most of the facebook discussions I've seen the past few years.

Anyway, I'm not feeling particularly kind about the wisdom of the American people at the moment.