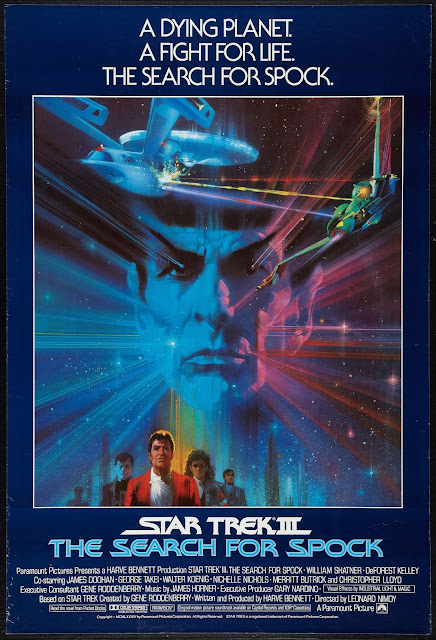 Star Trek III: The Search For Spock (1984) was the second Trek movie I saw, the first being Star Trek: The Motion Picture.  I expect we saw it in 1985 as we watched it on television - either VHS or on cable, so I would have already been very familiar with the cast of characters by this point as 1984 was the year I discovered Trek reruns on our local UHF channel, KBVO.

I liked the movie then, and I was delighted to find I thoroughly enjoyed it all over again.  Frankly, it's been forever since I'd seen this movie despite the fact it came with the Star Trek BluRay set Jamie gave me a few years ago for Christmas, and I didn't have particularly great memories of it from the last time I'd seen it, which could have been fifteen years ago.  At the time, I mostly just relished Christopher Lloyd as a Klingon ship's captain who is not so clever as he believes and is simply outclassed by Kirk and Co.

But there's a lot to recommend The Search for Spock.  It's a movie that does a fine job of raising stakes, having some fairly dark implications, but is eternally, against all odds, optimistic as our heroes fight bureaucracy, Klingons and the forces of nature for the sake of a friend.  And you can't get better than that.


The Search for Spock is the second of the three-movie arc that begins with Star Trek II: The Wrath of Khan, and wraps with Star Trek IV: The Voyage Home.  That subsequent entries in the Trek film series didn't think to create sub-groupings of trilogies, in retrospect, seems crazy, because this structure works like a charm.

Coming off of Kahn, the crew of the Enterprise return to Space Dock to repair the deeply damaged ship.  The crew is a mess, and the senior staff is in mourning at the loss of Spock, who sacrificed himself to save the crew.  His body was jettisoned to Genesis, the planet going through Sea Monkeys-like terra-forming thanks to a device concocted by Kirk's ex-wife and son, David.

But, Dr. McCoy seems to have a complete download of Spock's consciousness tucked into his brain, dropped there by Spock as he headed into what he knew was a suicide mission as he put to rights the radioactive core of the Enterprise in the wake of Kahn's attack.

Learning from Sarek that Spock might be saved, the officers of the Enterprise crew grab Bones McCoy and steal the decommissioned Enterprise, taking her back to Genesis.

Meanwhile, Klingons have determined the Genesis device is a world-killer and want it for themselves.  Led by Kruge (Lloyd), they attack a science vessel and hold David and Saavik (played in this film by Robin Curtis rather than Kirstie Alley) hostage.  Oh, and David and Saavik have found a young Vulcan on the planet they realize is Spock going through a rebirth process thanks to the effects of Genesis.

The movie is a great ride with some well-done character moments, from Kirk's devastation to Sulu's general bad-assery when breaking McCoy out of medical lock-up.  And, of course, the final scenes in which Spock returns to the crew.  It's genuinely moving stuff, especially for the longtime Trek-fan.  And I like to think it all shows you can have some grim and grit in your science-fiction epic and still tell a story about hope, and even one about the value of friendship (which, really, is what both Star Treks II and III are all about - one for all and all for one).

It's remarkable what director Leonard Nimoy pulls off in this movie as, really, he didn't have all that much experience as a director to this point, and he wouldn't go on to direct all that many more movies.  But it's also fair to say that the two he directed (III and IV) have the most affection for the characters and a great deal of heart.

In retrospect, not everything in the film entirely makes sense, and the ending is downright mystical - which is odd even for Trek.  I can't say Curtis is an outstanding addition to the cast, and I think this is the first time I realized there's a hint here that when rapidly-growing Spock here goes through Pon Farr, Saavik is more than willing to oblige (off screen).  Some of the bonus materials seem to back this up.

One of these days I'm going to need to do a Trek II, III and IV marathon and let this era of Trek just really soak in.  It's not the episodic exploratory stuff of the series (which I continue to love and feel is when Trek makes the most sense), and it's odd that a series of movies I loved so much as a youth are so much about these people dealing with late-middle-age crises and longtime friendships.  But, boy howdy, does that stuff resonate now.  Unlike the newer films, at least we got to see Kirk, Spock and Bones out in space on a 5 year mission, and a whole movie about meeting an unknown intelligence (your mileage will vary) before we went action-hero with the franchise.